When they graduated from Osmania University, Hyderabad, in the late 2000s, Vaishali Neotia and Hasan Khan already had the experience of collaborating to build a fun Facebook app, based on the FIFA World Cup, in college. Motivated, they decided to start a business together rather than climb up the corporate ladder. And so their company Merxius was born in 2011, making the duo a part of a growing number of college graduates who chose to become entrepreneurs rather than apply for jobs.

Merxius, which harnesses the powers of augmented reality, mixed reality and virtual reality (collectively called extended reality or XR) to service clients, began at a time when these technologies were still at a very nascent stage in India. For the uninitiated, XR, together with other emerging technologies, can merge the physical and virtual worlds to create an ‘immersive’ experience. Merxius commands a good presence, catering to a global clientele and has been recognised and awarded for its innovative work. 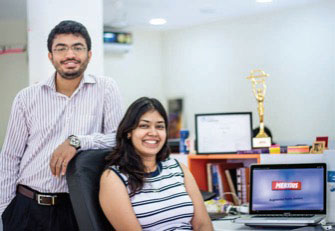 Vaishali Neotia (sitting) with Hasan Khan, the other cofounder of Merxius

Vaishali Neotia believes that a person is the sum of his or her experiences. Her grandparents (both paternal and maternal) had their roots in Rajasthan. They moved to Calcutta (now Kolkata) before Independence, however, and Neotia’s parents were thus brought up in the city; and so were she and her two sisters and a brother later. But she feels fortunate that despite being away from Rajasthan, her grandparents brought them up with the customs and rituals that they had imbibed while growing up in their home state, making sure at the same time not to force their beliefs on them, but instead, give them the freedom to decide on their own.

Neotia’s parents too were very progressive-minded and ensured their children got the best of education. They also encouraged their children early on in life to imbibe an attitude of openness. She says, “My siblings and I were taught to be open and receptive to different cultures and the ideas and perspectives of other people. We also learnt that when participating in a conversation or debate, our aim should not be to prove who is right or wrong, but to expand the collective consciousness.” Her parents also gave them a sheltered life, she adds, but at the same time encouraged them to be independent, follow their path and find their place in the world. They even made changes in the way things were being done in the family, her eldest sister being the first in the extended family to be sent out of Kolkata to pursue her undergraduate studies. Neotia, similarly, was allowed to follow her heart when it came to academics. “I was expected to take up commerce just like others in the family had done before me, but with the support of my parents, I opted for engineering and even after completing my studies, I did not join the corporate sector,” she says. She adds, “Further, my sisters and I were never taught to look at marriage as the end goal, but to consider it as a part of life.” 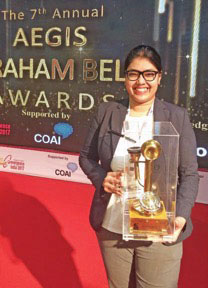 Neotia’s inspiration to start a business was Atul Dalmia, her uncle and a successful entrepreneur. She was also inspired by her parents who exemplified entrepreneurial thinking in their everyday lives. Her father is no more. An added impetus was that as an engineering student, she took up a project in college to develop a Facebook app on the FIFI World Cup with her friend Hasan Khan that ended up going viral. This made her confident that she could create something of her own. But what firmly set her on the path of becoming an entrepreneur was an incident that occurred during campus placements. Narrating the incident, Neotia says, “I had attended an interview for a job very reluctantly. During our conversation, as I discussed my start-up ideas with the interviewer, he realised that I had the potential to start a business. He told me not to take up the job, or I would end up wasting my talent. I was overwhelmed because no one had said something like this to me before. In the past, whenever I had shared my plans to start a business with others, they had always said that I should take up a job instead, because in those days, establishing a start-up was not as socially acceptable as it is today.” With her mind made up after this confidence boosting episode, Neotia decided to pursue enterprise and took the plunge.

Neotia and Khan started off small. They bought a computer and started working from a friend’s house in Hyderabad, with Neotia handling business development and Khan handling the technical side of the business. The initial period was spent on creating apps for other companies. Once they started making money, they took up an office space in the city and began hiring. Later, they ventured into augmented reality, mixed reality and virtual reality with different products and solutions. Currently, Neotia says they are focusing on RED, a no-code platform for manufacturing companies to repurpose their existing CAD data so as to help their teams undergo training around familiarisation and maintenance, in XR. 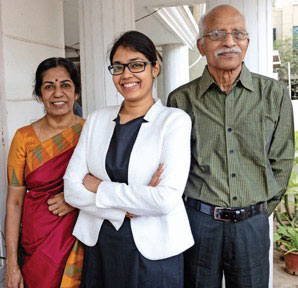 The couple from Kerala with whom Vaishali Neotia lives in Bengaluru and who are like parents to her (l-r) Sudha Madhavan, Vaishali Neotia, Setu Madhavan

Till date, Merxius has worked with a diverse clientele, including ZF, John Deere, Bombardier, Indian Armed Forces, Tech Mahindra, Pernod Ricard and Tata Elxsi. Along the way, it has won multiple awards such as the Aegis Graham Bell Award— for innovation in augmented reality in 2014 and for innovation in virtual reality in 2017. In 2018, Merxius was one among the three winners of the Boeing HorizonX India Innovation Challenge. Following this, Boeing invested in Merxius to help it further its business. Neotia on her part has won the Achievers Award for Tech Innovation from FICCI in 2018 and the Exceptional Women of Excellence Award from Women Economic Forum in 2019, among others. In 2013, she participated in the Goldman Sachs 10,000 Women Initiative, which aims to provide women entrepreneurs with business and management education, mentoring, networking and access to capital. She also completed Stanford Ignite, a programme focused on innovation and entrepreneurship from Stanford Graduate School of Business, in 2014. In 2015, she was selected for a mentorship programme conducted by the US State Department with Fortune 500 companies. Additionally, she has completed Empretec (a capacity building programme by the United Nations Conference on Trade and Development) and Startup Leadership Program (a global training programme for outstanding founders, leaders and innovators). She has also been a TEDx speaker several times. These apart, she has served as a mentor, speaker and member of various entrepreneurship programmes, initiatives, conferences and committees.

Merxius has its office in Hyderabad, but currently, its team is working remotely. Neotia moved to Bengaluru for a project three years ago, while Khan shifted base to Silicon Valley in the USA in 2019 for another project. So, what does the future hold for the duo? Neotia replies, “We are a B2B enterprise at present and will continue to focus on that. Even though XR is growing in India, it will take some more years for the growth to be significant. We are way ahead of the market in what we are doing, but we will have to be patient and plan according to how things change.”