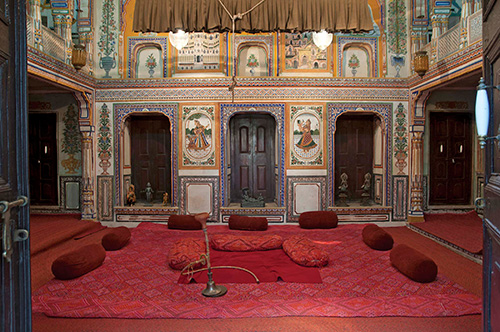 The inimitable charm of the majestic havelis of Rajasthan continues to draw the discerning traveller to the state. Marwari merchants from the Shekhawati region, which comprises the districts of Jhunjhunu, Sikar, Churu and Nagaur, constructed these opulent mansions in the years between 1830 and 1870.

These merchants often traded in silk, opium and cotton, earning considerable income. The fortune amassed was partly used to build grand havelis, which were then decorated with exquisite murals, both inside and the outside. Even today, their striking architecture, vibrant and colourful interiors and massive parapets reflect the wealth and prosperity of the merchants who resided in the area in that era.

As a visual artist, the singular feature of the havelis that fascinates me is the frescoes and murals. They bear testimony to the immense skill and aesthetic prowess of the artisans who created them with meticulous precision and intensity.

Structurally, the Shekhawati havelis share a roughly common layout. Usually built above road level, they typically feature a basement and have at least two floors—a ground floor and a first floor. The higher floor juts out, creating a ‘chajja’ or a balcony. The terrace could be adjacent to rooms on the first floor, or could be on a separate floor. The havelis sport a mix of Mughal and Rajasthani styles of architecture. One can spot these styles on the ornate doors, paintings and other elements such as motifs and arches. Often British influence is also apparent in the paintings—soldiers carrying muskets and ladies walking with umbrellas or enjoy a drink.

Shekhawati havelis were designed to impress with their architecture, themes and motifs reflecting the cultural sensibilities as well as the aspirations of their owners. In the words of Ilay Cooper, author of The Painted Towns of Shekhawati, “The haveli was to the merchant what the fort was to the Rajput—his home, his status, his headquarters and his defence.”

The ravages of time, however, have taken a toll on some of these imposing architectural marvels and chipped away at their former glory. Today, the sense of desolation that permeates from the abandoned havelis is all-pervasive and overwhelming. The visual appeal of these havelis, some of which are over 200 years old, is threatened with obsolescence. And the time might not be far when these havelis slowly ebb away from our collective memory. The moment to act is now. Without assistance, these marvels could fade away from Rajasthan’s fascinating cultural landscape.