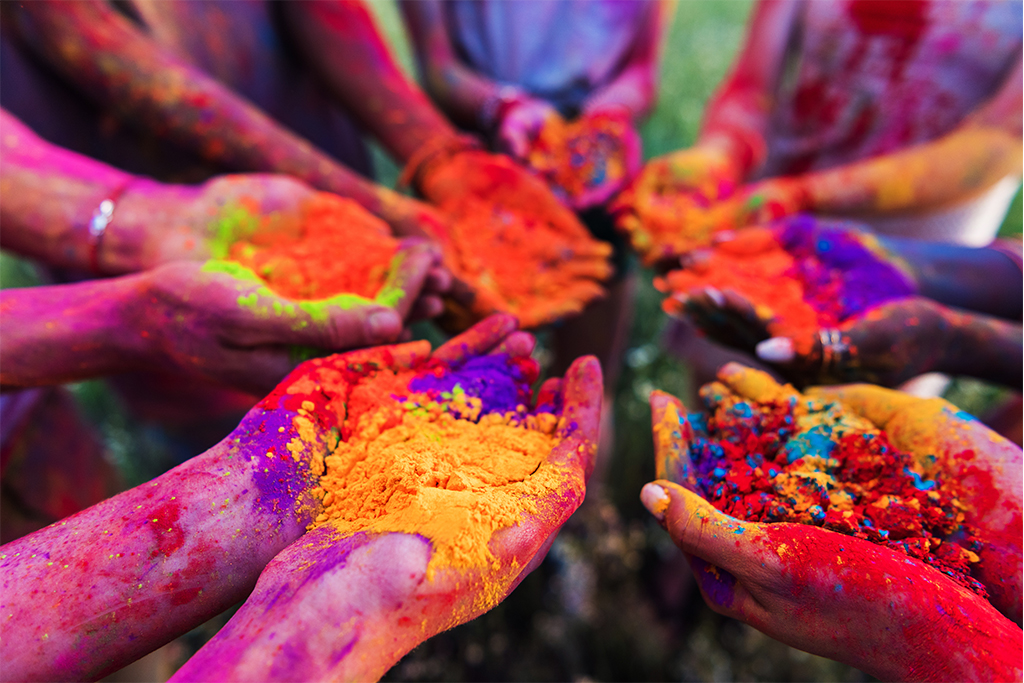 It’s that time of the year again when colours fill the atmosphere in celebration of the festival of Holi. Holi commemorates  the victory of good over evil and marks the end of winter and the onset of spring. It falls on a full moon , in the month of Phalunga of the Hindu calendar. This year, it falls on March 9-10.

The Legend of Holi

Apart from being one of the most enjoyable festivals, it has an interesting story behind it. It goes that the King of Asuras, Hiranyakashipu, had earned a boon that he could neither be killed by a human nor an animal, or by day or night, or by Astra or Shastra, or indoors or outdoors, and finally neither on land, nor in water or air. His son Pralhada, a devotee of Lord Vishnu, however, was against his father’s hegemony. Enraged by Pralhada’s behavior, the demonic king subjected him to various punishments, but his efforts went in vain due to Pralhada’s prayers. Hiranyakashipu’s sister, Holika, then tricked Pralhada to sit in a pyre with her, as she was immune to fire.

The tables turned as Holika burnt to ashes and Pralhada instead got encased in her protective cloak, due to his devotion, which saved his life. Lord Vishnu then appeared in the avatar of Narasimha and demolished the king. Holi thus celebrates victory of good over evil, spreading positivity thereby.

Hence, on the evening prior to Holi, Holika Dahan is celebrated, where people gather wood which is set on fire. The  large bonfire is said to ward off demonic spirits. Also known as ‘The Festival of Colours’ Holi is celebrated by smearing colours on each other’s face and by preparing and partaking of special delicacies and attending parties. The festivities take on various forms across the length and breadth of the country and each is celebrated fervently.

The Traditions of Holi

In the Braj region of Uttar Pradesh, Lathmar Holi is celebrated, where apart from smearing colours, women hit men with sticks, who have to defend themselves. At Vrindavan, the birthplace of Lord Krishna, the celebrations start early on Basant Panchami. Here one can witness flower Holi and  enactment of the Krishna Lila. Holi at Shantiniketan, Kolkata, takes on a different form, with students of Shantiniketan dressing up in saffron and singing and dancing to Tagore’s songs at a cultural event. In Punjab, Hola Mohalla is celebrated by Nihang Sikhs, where they  take part in processions and mock fights to showcase their martial art skills. Holi festivities in Jaipur see  people waklkin gin a procession, together with colourful elephants and horses and accompanied by the royal band.

MARWAR wishes you a joyful Holi!