Recently showcased in Kolkata, Karkhana 11, an OSAA event, was about an impressive factory installation, that put up a full length laboratory of ideas, starting from the messy desk of a designer, then moving to mood boards, the final sketch, execution in weaving and to the final presentation. “It began with an idea—the idea of a lifetime” is how owner Adarsh Makharia puts it. Karkhana 11 chronicles the journey of a designer and his thought process in graceful snippets of production shots right from the selection of the thread to the spinning and making of beautiful vintage apparels. 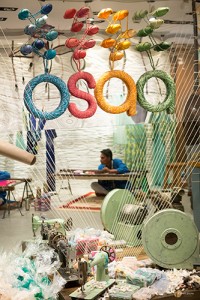 The philosophy behind the show
The focus of the show was to highlight artisans—the unsung heroes. “What goes behind making an exquisite garment? I wanted the audience to appreciate those who take immense pain crafting such elaborate garments,” Makharia says.
The effort in creating a museum on garment production is a deliberate step by Makharia and he believes this will help clients choose and filter their preferences. “It was a dream to host an event like this, bring into focus the craftsmanship and labour that goes into designing clothes.” Through his simple approach, Makharia brings into limelight the unnamed heroes who have been working over generations in creating impeccable designs and have helped the industry evolve. 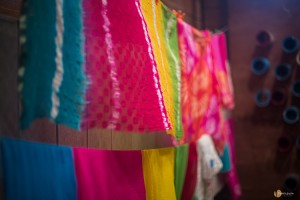 “Designers enjoy popularity, but the idea is the only thing they own. If you look at the craftsmen working in their stations you would know who the real faces behind such beautiful dresses are. This show is therefore an acknowledgement, a way of thanking those who work behind the scenes,” Makharia says. Amidst the plush and quirky decor, the event showcased live counters where looms men and karigars from Benaras, Lucknow and Bengal worked on motifs using a wide range of technologies.
The event brought to the surface another agenda—efforts to free the market from the grips of plagiarism while enhancing quality metrics.

A star-studded event
The event was graced by people from all walks of life such as the chairman of Ambuja Neotia group Harshavardhan Neotia and wife Madhu Neotia, owner of Sawansukha Jewellers Siddharthaa Sawansukha, veteran PR professional Rita Bhimani, entrepreneurs Utsav Parekh and Siddhartha Birla. “It was like seeing the soul of the finished product,” Bhimani said, “The event is a lovely celebration of unsung heroes,” said Madhu Neotia.

An eclectic blend
OSAA is about funk mixed with the right dose of traditional and under Makharia’s expertise all vintage motifs and artwork are given a tasteful yet eclectic modern twist. The fine balance of the traditional and the modern is created through a culmination of antique motifs and modern cuts and silhouettes; the end result is unmatched signature products, which is rich in textile and look. The prêt line, which was showcased at the Bridal Trunk Show this July, impressed everyone with its exquisite embroidery, colour ideas, smart cuts and interesting profiling of bridal characters.
Each product is unique, and there are no two sets of products, thus ensuring exclusivity and perfection. The house stores exclusive varieties of saris, lehngas, cholis, kurtas and anarkalis.

All Things [Great and Small]