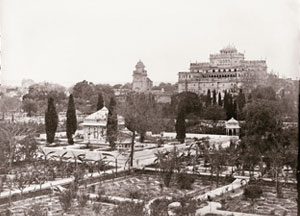 Giles Tillotson and Mrinalini Venkateswaran, the editors of Painting & Photography at the Jaipur Court, take readers on an artistic journey spanning two centuries in this coffee-table book, the fourth in a series of well-researched publications showcasing the collections at Jaipur’s Maharaja Sawai Man Singh II Museum.

The records of the royal Pothikhana (library), Suratkhana (painting atelier) and Gunijankhana (centre for performing arts) bear witness to the various commissions to poets, artists, writers, craftsmen, dancers and musicians during his reign. His most notable architectural contribution was the Hawa Mahal (Palace of Winds), built for entertaining the women of the court, while also permitting them to view events in the city on special occasions from a safe distance.

Several painters in his court recorded his life and endeavours on a grand scale. A major task in the royal atelier, aside from manuscript illustration, was painting the patron himself, executed by the most notable artists of the time. Maharaja Sawai Ram Singh II had a passion for photography, which is reflected by the range of images he created, particularly the portraits, which straddle the hierarchy of his court. They suggest the documentary nature of his endeavours, a drive to record everything and everyone possible with the new technology of the camera. However, such an effort to capture the people and spirit of the times was not new in Jaipur. A similar exercise was undertaken by Maharaja Sawai Jai Singh II (regined between 1699 and 1743) and his immediate successors, using pigment and paper. The resulting paintings record the nobles and grandees of the court as well as anonymous women and junior functionaries.

Maharaja Sawai Ram Singh II moved beyond the confines of his studio and took numerous photographs of the palace and of the cities of Amber and Jaipur. His preference for oblique and scenic views shows the lingering influence of the picturesque, an aesthetic derived from painting and gardening that had a profound impact on early landscape photography.

Apart from their beauty, the images in the book are also valuable from a historical perspective in that they provide as records of the condition and appearance of places before changes were made in recent times. For instance, the garden and interiors of the City Palace appear very differently today and the streets of Jaipur are more built up and congested. Even so, the familiar landmarks stand out, which are among the earliest known photographs of the city.
Sawai Ram Singh’s choices of subjects and of vantage points are, in many cases, similar to those of other photographers of his time. Their work has been included in this tome for comparison. This is the fourth volume in a series of publications illustrating the collections of the Maharaja Sawai Man Singh II Museum. And like its predecessors (Festivals at the Jaipur Court by Vibhuti Sachdev; Arms & Armour at the Jaipur Court by Robert Elgood, and Textiles & Garments at the Jaipur Court by Rahul Jain), it pays a great deal of attention to detail.