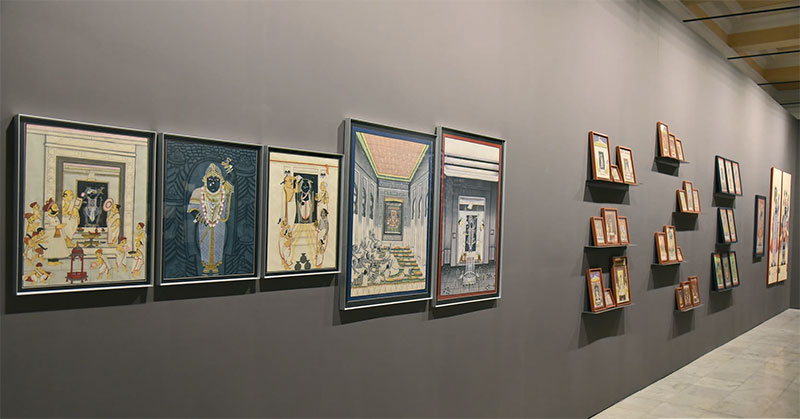 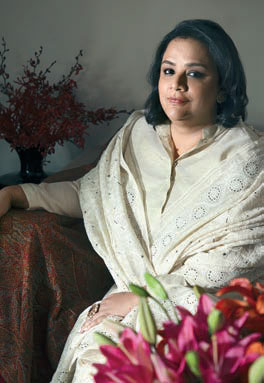 The fourth edition of Pooja Singhal’s exhibition on pichvai art was recently held at Bikaner House in New Delhi. Titled ‘Interventions – Pichvai Tradition & Beyond’, the event had on display works from Singhal’s atelier in Udaipur and was open to the public from April 27 to May 11.

In 2011, Pooja Singhal, a Delhibased art enthusiast and the founder and director of a womenswear brand called Ruh, embarked on a mission to revive, preserve and sustain the tradition of pichvai, an endangered art form from Nathdwara (near Udaipur), in Rajasthan. She created her own atelier to make high-quality works that would stay true to the traditional style, but also incorporate modern aesthetics and contexts to make them contemporary and relevant. And it is the fruit of this labour that resulted in a carefully curated display of pichvai art, commissioned by Singhal, at the fourth edition of her pichvai revival series. Titled ‘Interventions – Pichvai Tradition & Beyond’, the exhibition opened at Bikaner House, New Delhi on April 27, 2019 and was open for public viewing till May 11.

Pichvai, which originated in Nathdwara, is a meticulous, detailed, hand-painted work of art, executed on cloth, that illustrates episodes from the life of Lord Krishna, in his incarnation as Shrinathji. Traditionally, pichvais were hung on the THE BEST THE WORLD HAS TO OFFER walls behind the idol of Shrinathji, in the sanctum of the Nathdwara Temple of Udaipur. The temple is the main shrine of Shrinathji and is highly revered and visited by devotees. Pichvais hold religious significance for followers of Pushtimarg, one of the most ancient Vaishnav sects of Hinduism in the country. 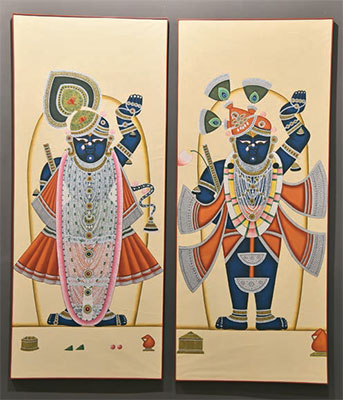 Kota pichvais depicting Shrinathji, with minimal background and no borders

Pooja Singhal first became fascinated with pichvais as a little girl. Growing up, she would see artists from Nathdwara visit her home in Udaipur to display their collections to her mother. Back then, each work would showcase brilliant craftsmanship and use of the finest natural colours, created by grinding various coloured stones. However, as the years passed, she realised that the newer art pieces were far from original, as stencils and spray guns were being used. Also, stone colours had been swapped with pigment paints and the rigour of the original art had been forgotten. Even the number of artists had diminished, as the art form no longer offered a viable source of livelihood for traditional pichvai artists, who had inherited skills that had been passed down from one generation to the next for centuries. Realising that very soon there would be no artists left to produce a good pichvai, Singhal began working with some of the artists associated with her family. Over the years, Singhal formed an atelier with 50 artists—some of them were from traditional artist families while the others were newcomers—and commissioned hundreds of new pichvais. There have been many challenges along the way, including getting the artists to adapt their thought process to changing times and for Singhal to conceptualise new ideas and translate the same for them. 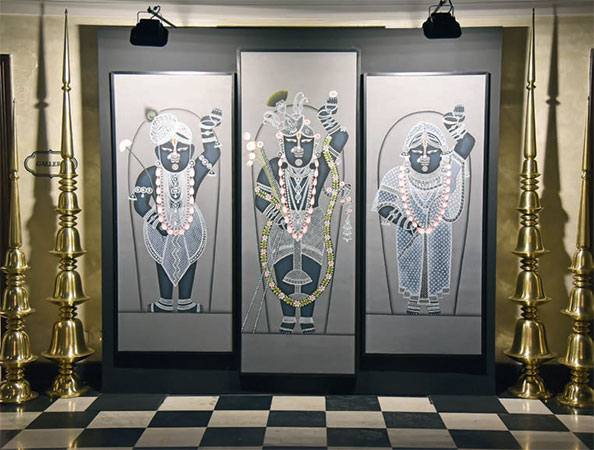 For her recent exhibition at Bikaner House, Singhal had put up about 300 pieces of pichvais that combined traditional elements with newer sizes (large-scale and miniature), colour palettes, graphics, themes and materials. Most sections displayed contemporary artworks hung as installations with interesting wall-mounting techniques. On one wall hung a spectacular example of an old, traditional Deccan pichvai—a dancing cow in burnished gold on a black fabric— which had combined the art with the gold foiling technique from the Deccan. Also on display were Nathdwara miniatures, where huge cloth compositions (like those of traditional pichvais) had been scaled down to a quarter of the size, on handmade paper called basli. Singhal says, “These smaller works have a distinct visual identity of their own: the paper reacts differently to the natural colours we use and creates a distinctly vintage look, referencing the traditional form.” Then there was the chowbees swaroop (24 divine forms of Shrinathji), typically depicted along the borders of pichvais, which had been deconstructed into miniature works, using decorative elements from Mughal miniature paintings. “These elements add layers to traditional pichvai compositions. The clothes of the deity and the priest, the backdrop and borders are embellished subtly by the beautiful motifs.” Some artworks also deconstructed motifs typical to pichvais, like lotuses and cows. The cows had been given striking backgrounds like checks and chevrons. The lotuses, generally depicted against a grey background, had instead pastel blue, white and pink backdrops, having been framed like triptychs, or painted like foliage, or in repetitive patterns.

The Kota miniature style pichvais that had been displayed presented a vintage effect, achieved by the use of traditional red and blue stone colours. These had been propped on ledges, or framed in metal to bring out their inherent edgy feel. There were also larger-than-life solo screens depicting Shrinathji in the foyer that had been deconstructed from the Kota style. Some were borderless and had been juxtaposed against a backdrop of cows. Another highlight of the exhibition was the greyscale version of a 400-yearold map, featuring a visual representation of Nathdwara. Singhal’s artists had produced this work under her guidance after referencing black and white photographs. 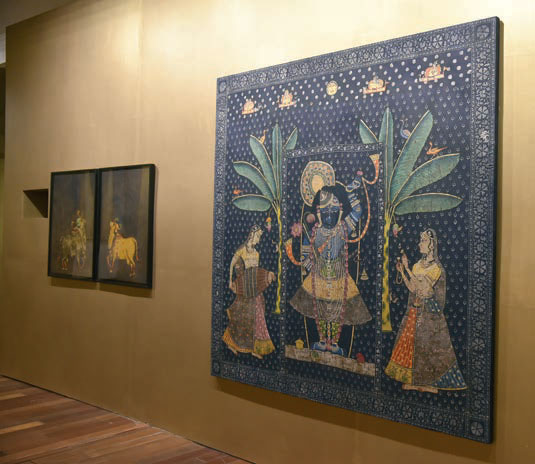 A Deccan pichvai on cloth, combining Nathdwara painting style with the gold and silver foiling technique from the Deccan

The artworks on display strongly reflected Singhal’s mission to bring back original pichvai techniques, while allowing for interventions within the traditional context so that the work found contemporariness. Whether it meant taking the chowbees swaroop and breaking them down into individual compositions on a smaller scale, or reproducing largescale pichvais into smaller paintings that drew inspiration from miniatures, Singhal has encouraged her artists to do it all—in her bid to revive the art form and take it to modern living rooms. Singhal says, “I have taken this traditional art form, maintained its ethos, and yet brought out something from within that is aesthetically and culturally relevant. The artworks are competitively priced, without compromising on relevance or negating the aspiration.” Indeed, with the price of artworks ranging from a few thousand to several lakh rupees, they can fit a variety of budgets. Art that is truly accessible, we say!