Home People Profile The Man Who Brought Hyatt to India 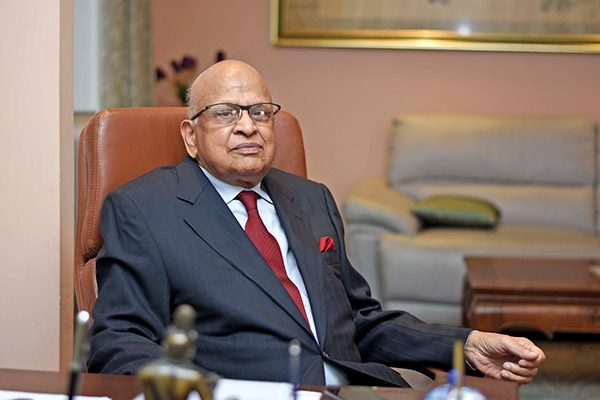 THE MAN WHO BROUGHT HYATT TO INDIA

Radhe Shyam Saraf, the man who has given India’s hospitality industry a new perspective by bringing in the distinguished service and international class of the Hyatt brand of hotels, epitomises both hospitality and entrepreneurism. Sanguine, outgoing and cheerful, we bring you the inspiring story of the octogenarian who is credited with taking Hyatt to every major city in India, starting with a single property in 1982.

OLD AGE HAS HARDLY BEEN ABLE TO PUT THE brakes on Radhe Shyam Saraf, who, at 87, is still amazingly fit and hands-on with his sprawling hospitality business that goes beyond national boundaries. Friends, family, business associates—he’s in touch with them too, and paucity of time makes him wish for more than 24 hours to his day. Few men wouldn’t want to be in Radhe Shyam Saraf’s shoes, whose life, it seems, is truly blessed. Health, wealth, success, long-life, happiness—he has them all!

A veteran hotelier who owns and manages a dozen 5-star properties, with several more under construction, Radhe Shyam Saraf began his journey 70 years ago as a trader in Kalimpong, in sub-Himalayan West Bengal. As he begins to talk about his life’s journey, his son, Arun Saraf, takes his place close to his father, to help him with his impaired hearing and articulate the narrative. As the duo takes us back to the Sarafs’ past, the story that emerges is that the family originally is from Ratangarh, in Rajasthan, from where some 200 years ago, the Sarafs shifted to Manipur, lured by better business prospects. Later, relocating for a second time, the family moved to Guwahati, where Radhe Shyam Saraf was born.

An entrepreneur at 17
The early ’40s brought World War II to the doorsteps of Northeast India, with which the Sarafs returned to the relative safety of their home in Ratangarh. Tragedy, however, struck soon after when Radhe Shyam’s father passed away, leaving the family to fend for itself. Radhe Shyam was just 12 then. With family resources not being enough to sustain them for long, a few years on, armed with a modicum of education that he had picked up in Ratangarh, Radhe Shyam left home for Kalimpong, where together with his brothers Shyam Sunder and Ram Gopal, he started his career as a trader, upon their aunt’s repeated entreaties, who lived in Kalimpong with her businessman husband.

“I started my business on June 13, 1947, at the age of 17,” says Saraf, taking us back to those inceptive days. “There were good opportunities to do business with the Tibetans at the time—this was before the Chinese occupation of Tibet—and we made good money.” The Sarafs would take goods from Kalimpong to the Nathu La Pass (in Sikkim) and sell them to the Khampa traders, who would then take them to Yadong in Tibet along an offshoot of the ancient Silk Route. This, of course, involved undertaking arduous journeys across mountain roads, as most of the goods would have to be carried by mules in those days. “We would sell everything that was in demand, ranging from Rolex and Nivada watches to cigarettes, clothes and even steel and cement,” continues Saraf. “I even learnt to speak Tibetan, as that made it easier to do business with them.” Almost a lifetime later, he still speaks Tibetan like a native and still is in touch with his friends from the region, who include His Holiness the 14th Dalai Lama, the Karmapa Lama of Rumtek Monastery and others.

Getting into big-time business
Fifteen years later, the Indo-China aggression of 1962 forced him to quit and relocate to Kathmandu, where he resumed his trading activities. But the trading processes and systems in Kathmandu weren’t to his liking and exasperated he looked to change his line, which fortuitously did happen with an opportunity coming by to foray into the hospitality business.

Son Arun explains the process: “Actually he was in Nepal, doing business, and there was this restaurant called Yak & Yeti, which was being run by his friend, but which he was funding. Around this time, World Bank seemed keen to invest in Nepal, and impressed with the success of the Yak & Yeti, made an offer to my father that if he would consider building a hotel, they would fund the venture. My father liked the idea and that is how actually, without having a grand plan, he got into the hospitality business.”

The Yak & Yeti restaurant was situated in Lal Durbar, the 175-year-old former palace of the royal family, which was divided between 7-8 brothers. Radhe Shyam initially bought one portion of the palace, where the Yak & Yeti restaurant was located and converted it into the Yak & Yeti Hotel in 1977. Given its locational advantage, success greeted the property right away. Some 35 years later, he was to buy the entire palace and today the Yak & Yeti Hotel is a luxury 5-star deluxe hotel in the heart of Kathmandu, amidst sprawling lawns and the restored glory of the former palace.

Buoyed by the success of the Yak & Yeti, in 1969, Radhe Shyam moved base to Hong Kong to regenerate his trading business, where he set up a fully fledged office to trade with Japan, Korea and China. With success greeting this venture too, he settled down in Hong Kong as a permanent resident, where his younger son Umesh oversees his business interests.

Taking Hyatt places
Back in India, in 1973, Radhe Shyam’s first hotel company, Yak & Yeti Hotel Ltd, was formally established, which today is a part of Saraf Hotel Enterprises, an umbrella organisation that includes a host of other hotels that the Sarafs have subsequently added to their chain. Most of these operate as Hyatt branded properties such as Grand Hyatt, Hyatt Regency, Andaz, Hyatt Place—the brands are owned by American hospitality giant Hyatt Hotels Corporation. The very first of these was established in the early ’80s when Radhe Shyam introduced the Hyatt brand to India with the construction of Hyatt Regency Delhi, in the run-up to the Asian Games (1982).

Less than a decade later, he launched his second Hyatt branded hotel in Delhi, the 400-room Grand Hyatt, which now is known as The Grand New Delhi. Simultaneously he started work on Hyatt Regency Kathmandu which came up soon after. A few years on, the Sarafs launched Hyatt Regency Kolkata and Hyatt Regency Mumbai. These were followed by Grand Hyatt Mumbai which was an instant hit. Other Hyatt branded properties have come up since in Chennai (Hyatt Regency Chennai), Hampi (Hyatt Place Hampi), Raipur (Hyatt Raipur), Ahmedabad (Hyatt Regency Ahmedabad), New Delhi (Andaz Delhi) and Lucknow (Hyatt Regency Lucknow). Apart from these, a few more properties are in the pipeline which will come up in other cities like Goa, Bodh Gaya, Guwahati, Bhubaneswar, Trivandrum and Jaipur.

So what is the understanding between the Sarafs and Hyatt? Arun Saraf explains: “In all these hotels, everything, starting from the building to all equipment, is owned by us, and all the managers and associates are our employees. Hyatt, however, runs the business as per Hyatt standards. So we get the Hyatt branding, the Hyatt standard and we get the support of Hyatt’s network and marketing offices. However, if the hotel does well, we get the higher profit. Hyatt gets a fee, which is a percentage of the revenue and the operating profit.

Beyond hotels and trading, Radhe Shyam has recently diversified into the power generation business as well, and as of now, he has two hydroelectric power projects in Nepal on the anvil. These are the Solu Hydroelectric Project in the Solukhumbu district, which has a generating capacity of 25 MW, and the Super Trishuli Hydropower Project, which is located in the Chitwan district and has a generating capacity of 100 MW. Both are expected to go into operation by next year.

Home life
On the home front, Radhe Shyam Saraf still has wife Ratna by his side, who has not just been a life partner to him but also a business partner, as son Arun Saraf reveals. Now in the fourth generation, the happy family comprises Radhe Shyam’s two sons, Arun and Umesh; daughters Usha, Anita and Neeru, who are married now; grandson Varun (Arun’s son) and Devesh (Umesh’s son) and great-grandson Trigya (Varun’s son). During major festivals, the family meets in Kathmandu, where Radhe Shyam has been residing for the last few years and from where he now controls his businesses. “They all communicate with me about major business-related issues and I give them proper advice,” says Radhe Shyam, referring to his sons and grandsons. While Arun looks after the Hyatt properties, Umesh takes care of The Grand in New Delhi and the upcoming property in Goa, apart from overseeing the family’s business interests in Hong Kong.

Towards newer horizons
Though these properties continue to do well, Radhe Shyam seems to have had his fill of “constructing hotels” and wants to take the acquisition route in the future to owning new properties. That apart, he also envisages getting into some other field—manufacturing perhaps. But that will be for the sake of his grandsons. He also plans to do something big by way of philanthropy, with his very own funds. Philanthropy, incidentally, is not new for Saraf, who has founded a premium English medium school in Kathmandu called Modern Indian School. That apart, he also has been involved in a lot of social welfare work in rural Nepal. In view of his various contributions, he was conferred the Gorkha Dakshin Bahu Award by His Majesty the late King Birendra Bir Bikram Shah Dev, which is the second highest civilian award in Nepal.

At an age when most others take a back seat and are content with taking a ring side view of the goings-on, Radhe Shyam Saraf exhibits no sign of letting up. Decades of toil have neither been able to dim his enthusiasm nor take away his cheerful disposition. Asked to sum up his long life, he lets out his characteristic chuckle, and says, “I am quite satisfied… I am happy.” The ruddy glow on his face shows that he means what
he says.