“From childhood, the retail sector has excited me the most,” says 25-year-old Shashwat Goenka, Sector Head, Spencer’s Retail Ltd., to whom I am talking. “While visiting any store with my parents or grandparents, I would notice how retailers got their merchandise displayed, often by using eye-catching signs announcing sales and promos. Back then I didn’t even know the meaning of the word ‘merchandise’, yet I would observe how one store would have 20 check-out counters while a luxury store would perhaps have one person manning the counter, or how some stores would have white lighting and some yellow, and how in some, aisles would be positioned to encourage customers to move right or left and walk counter-clockwise.”
The only son of Sanjiv Goenka, chairman of the RP-Sanjiv Goenka Group (which has an annual turnover of R15,511-crore), Shashwat has been holding the reins of the retail chain since April 2013, which makes him the youngest business head of an organised retail enterprise on the block.
“The retail sector mostly caters to consumers aged between 16 and 34. Since I was young, I felt I would be able to connect with the buyers and contribute to the business in a big way,” he says. 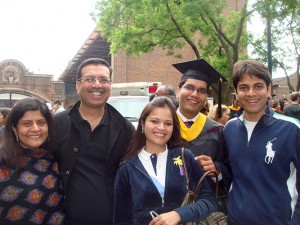 Student years: fortitude & theatre
Motivation is a significant factor behind the success of an individual and the family can play a pivotal role in providing it. Shashwat shares, “At home, we were always taught to push ourselves to excel. We were told that things work out if we work really hard and persevere.”
A young Shashwat made sure to hold on to this belief right from his schooldays at Kolkata’s St. Xavier’s Collegiate School. He earned a gold medal in his Indian School Certificate (ISC) examination in 2008, after which he went to the US to pursue a Bachelor of Science in Economics (with concentrations in Finance, Marketing and Management) at the prestigious Wharton School of the University of Pennsylvania. Just 18, the experience was a steep learning curve for him in gaining independence. “You obviously have to cope on your own. While school gave me the basic foundation for values, my days at Wharton helped me understand and analyse problems and issues from a worldwide perspective,” Shashwat says.
While his zeal to keep a good academic standing continued at Wharton, it was also closely followed by the desire to opt for other pursuits that would fit his interest. To demonstrate leadership, work as part of a team and show commitment, he signed up for various committees within the university, including the Preceptorials Committee (for creating non-credit seminars in collaboration with esteemed professors and outstanding graduate or undergraduate students), the International Mentor Program (to help in the transition of freshmen) and the marketing committee of Wharton India Economic Forum (an annual conference).
Theatre also caught his interest. “My family has always had a fascination for the performing arts and culture. Perhaps that is why I chose to explore theatre,” Shashwat says. PenNaatak, the university’s theatre group, seeking to explore issues of the South Asian diaspora through performance, took him on as technical director, and Shashwat tells me how—between 2009 and 2010—he would handle stage lighting, sound effects, construction and repair of sets, props and backdrops, and even do electrical work. “I even developed a liking for carpentry,” he says with a smile. In 2010, he was appointed the Chair and Director of PenNaatak and went on to direct two plays: Rahul da Cunha’s Class of ’84 and Dinner with Friends, a Pulitzer Prize-winning 1998 play by Donald Margulies.

From a barista to a business scion
Most students studying abroad rely on part-time work to pay bills and gain some work experience, and Shashwat was no different. From 2009-11, he worked as a barista at Williams Café on the university campus. There would be 10-minute breaks between classes and Shashwat’s team would serve anywhere between 50 to 200 customers in that period. He says, “Working as a front-end staff was a good way to experience the functioning of a consumer-facing business. It was a fast-paced environment and I learnt how to think clearly despite the rush and work under pressure, and how to deal with different customers and their requirements, and most importantly, how to manage time.”
It was in the summer of 2009 that Shashwat landed his first ‘official’ internship. The university was closed for summer, and Shashwat returned to India and signed up for a stint as a corporate finance intern with the Mumbai branch of KPMG India, a leading provider of risk, financial services and business advisory. In the summer vacations that followed, Shashwat worked as a merchandising intern with Spencer’s and as a brand management intern with Nestle India Ltd. 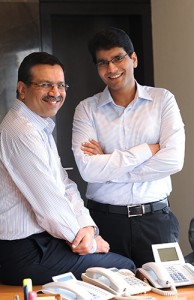 Learning the ropes
Shashwat graduated from Wharton in 2012. As time drew near for him to join the family’s well-established business empire, there came an eagerness to work in the retail vertical. But his father ensured his son learnt the ropes by first working in the different businesses operating under the conglomerate. “On my very first day, I was told that there’s no such thing as a stupid question. From then on, no matter how small or significant the meeting was, if I had a question, I made it a point to ask. Today, I can safely say that curiosity, listening and asking questions can help one learn the fundamentals of business.”
During those 10 months, Shashwat worked on a series of projects and learnt how each business operates, how diverse each company was from the rest and how within the same company, every person worked on different things at the same time. Today, Shashwat is the director of two group companies: Firstsource Solutions Ltd. and Phillips Carbon Black Limited.

Profitability & cost-cutting
In the fiscal year ended March 2013, Spencer’s had posted a loss of R209 crore. In April 2013, Sanjiv Goenka gave his son his most difficult assignment yet—independent charge of Spencer’s Retail. Considering his family’s long-standing, illustrious background, what were the expectations people had from him? “I was expected to drive Spencer’s Retail to profitability and break-even. My focus though was not just on increasing revenues, but also on cost-cutting,” says Shashwat. The time spent as a merchandising intern at Spencer’s was helpful, and Shashwat talks about how Spencer’s seasoned team helped him cope with the demands of the job. “My father played the role of a mentor, and advised me to always forward ideas in a reasoned, logical, persuasive manner. In addition, my grandfather had always said, ‘If you have to do ten things and get seven wrong, it’s better than doing nothing and getting nothing wrong’,” Shashwat says.
The first step that the young chief took after assuming office was sharpening the retail chain’s vision. “While there was a vision, it wasn’t very clearly defined when it came to the kind of store format we needed to focus on. We had small stores, supermarkets and hypermarkets [very large self-service stores], which were thinly spread all over the country,” he recollects. Shashwat, however, had a very clear-cut vision for Spencer’s—to make it the most profitable and preferred hypermarket retailer in the country. Towards that, Spencer’s fine-tuned its focus to opening hypermarkets in select geographies, rather than opening small stores. This year, Shashwat plans to open around 12-15 hypermarkets, of which four have already been unveiled.
When it came to reducing costs, flattening the organisation helped, and Shashwat and his team also pursued ways to reduce operational costs in the stores and at the corporate level. Another challenge was to increase the revenues from the existing stores and get the most out of each square foot of the trading area that Spencer’s operated in. “Spencer’s had historically been a food-first retailer. We now started looking more actively at non-food, apparel and general merchandise that would give us a higher average selling price per product,” Shashwat says. Steps were also taken to redo the food section in select hypermarkets of the chain. A great deal of effort was put to stock a unique range of products, and Spencer’s launched fresh-food hubs with live kitchens called Epicuisine, keeping in mind nuclear families and working couples in metros. Live bakeries, gourmet food stations and wine & spirit sections were also introduced.
The losses have reduced significantly, and Spencer’s Retail has broken even at the earnings before interest, taxes, depreciation and amortisation (EBITDA) level in May this year. Over the past two years, it has also won a slew of awards, including the Coca Cola Golden Spoon Award 2013, CII National Award for Food Safety 2014 and Highest Job Creator in Eastern Region at the ICC Retail Awards.

The roadmap for the future
Spencer’s Retail also plans to enter the e-commerce segment within the next few months, and is working to structure an online venture. Shashwat explains, “It will just be a different channel to retail the products we sell through our stores, and be limited to the cities where we have operational outlets, so as to bank on people’s awareness of our brand.”
So, how is the future looking for Spencer’s Retail? Shashwat is quite optimistic about the way things are going. “We’ve reached a good space. May 2015 was our first profitable month, which shows that a lot of the things we have done are working. We still have a long way to go, but I am confident we will reach the end goal very soon,” he says.

Gem Of A Wedding