Rajasthan’s architecture transports one into an era of magic, grandeur and regalia. The forts stand as a symbol of military, strategy, defense, marvelous architecture as well as luxury. The origin of a lot of forts remains anonymous adding to the enigma of the structure. One such mysterious and magnificent fort is the Chittorgarh fort that is known for its tragic history and the expansive area that it covers.With 5 other Forts Chittorgarh was declared a UNESCO World Heritage Site.

The Illustrious fort is regarded as the most prominent fort in the state and was the capital of the world’s longest ruling dynasty, the kingdom of Mewar for eight-centuries. The origin of the fort dates back to the seventh century, when Chitrangad Mori of the Maurya dynasty is believed to have laid the foundation stone. The fort came in possession of Bappa Rawal in the mid- eighth century, however the possession remains a conflicting issue. While some say that he seized the fort, others believe that he received it as a dowry. Nonetheless, the fort remained the capital of his extensive kingdom stretched from Gujarat to Ajmer.

The kingdom flourished and remained with the rulers of Guhila dynasty until 1303, when Alauddin Khilji decided to capture it with a siege that lasted eight months long. One legend states that the conquest took place in an attempt to win Rani Padmini, King Ratnasimha’s wife. The siege led to a massacre and the queen with other women of the fort performed mass self-immolation (jauhar) to protect their honour and kept the land unsullied. The jauhar is commemorated even today and stands as one of the most tragic history event in the history.

The fort was then passed down to his son Khizr Khan and after a short reign of seven years the fort was recaptured by Hammir Singh, reclaiming the Mewar dynasty making the rule stronger than ever. Rana Kumbha was a famous descendant and the kingdom flourished under his rule.

Around 1535, the fort was attacked by Sultan Bahadur Shah of Gujarat who wanted to expand his territory. This was the second time that jauhar took place in the history of Chittorgarh.

Unlike the other Rajput rulers, the Mewars didn’t submit to Mughals and hence in 1567, Akbar attacked the fort with his powerful massive army and took over it in 1568. A grueling bloodshed took place and the Rajput women sacrificed their lives through jauhar for the third time.

In 1616, Jehangir gave the fort back to the Mewars under a peaceful treaty and since then has remained with them. 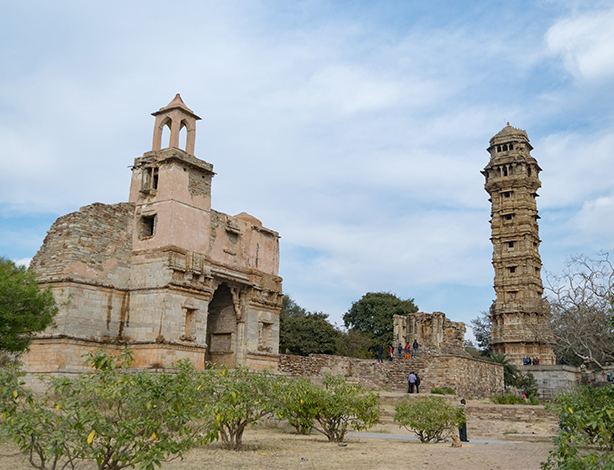 Situated around 100 kilometers away from Udaipur, Chittorgarh mightily stands encompassing an area of around 700 acres and 65 structures with a perimeter wall of 13 kilometers. 84 water bodies out of which 22 are functional today are also an inseparable part of the fort. Perched high on the banks of river Gambhiri,the substantial area needs a days’ time and a vehicle to visit all the attractions .

The Rana Kumbha Palace which is the oldest palace, though in ruins leaves a lasting impression with its series of canopied balconies and giving us a glimpse of his glorious reign. The Padmini Palace, named after Rani Padmini is as impeccable in its beauty as the queen was known to be.

The Vijay Stambh, also known as the victory tower was constructed by Rana Kumbha and was dedicated to the triumph over the forces led by Mahmud Khilji in 1448. The tower showcases intricate religious as well as cultural architecture and is so tall that it can be viewed from any part of the city.

The Kirti Stambh stands as another famous attraction that was built by Rawal Kumar Singh in the 12th century to honor Adinath, the first Jain Tirthankara. The newly restored Fateh Prakash Palace serves as a museum of medieval weapons, age-old paintings and structures and is famous amongst tourists.

Apart from the palaces, there are various temples like Meera Mandir, Kalikamata Mandir and Jain Mandir – Satbis Deori in a well-maintained condition that are a must see.

The combination of its catastrophic history and monumental architecture ranks the Chittorgarh fort on a high pedestal and creates an eternal fascination in the visitor’s mind.