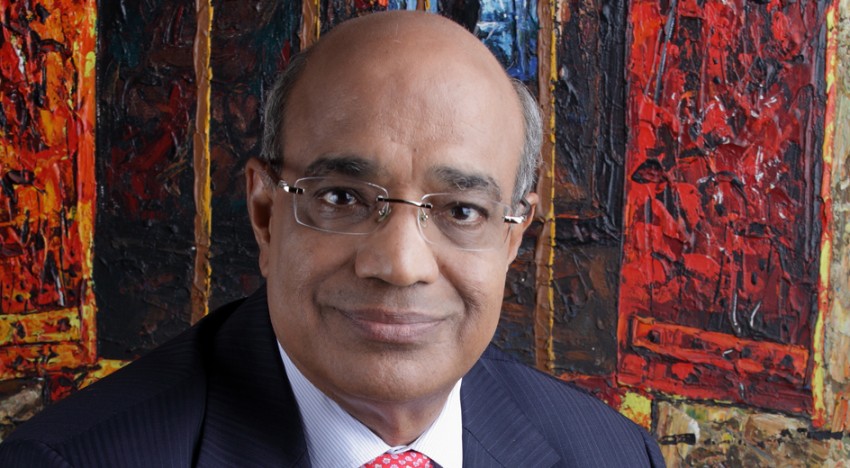 Once a vibrant proletarian quarter
and the heartland of Mumbai’s cotton district, Lower Parel has undergone a social and economic transformation in the new millennium. The defunct and derelict mill properties with their crumbling facades and workers’ tenements have been replaced by swanky high-rises that offer upmarket offices, luxury housing and top-of-the-line malls. Lower Parel is perhaps contributing the maximum to Mumbai’s changing skyline, and the district keeps welcoming new high-rises with unwavering regularity. One such high-rise is One Avighna Park, a 64-storey colossus that redefines luxury living.
“In the years to come, the core of this revitalised district in central Mumbai would be centred on many such modern high-rise buildings that make liberal use of prestressed concrete and glass,” says Kailash Agarwal, the chairman of Avighna India Ltd, talking about Lower Parel’s rapid transformation. In 2006, Agarwal’s company had bought a 6.5-acre plot (which earlier housed the New Islam Silk Mills) and four years later, work started on the two 64-storeyed, high-end residential towers that comprise One Avighna Park. 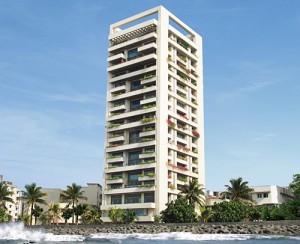 The first step towards transformation
Even before its completion, the luxury towers have won 31 awards till date. The project has been accloaded as the World’s Best Residential High-Rise Development at the International Property Awards in London, for two consecutive years (2012 and 2013) and has also been pre-certified as a Platinum Rated Green Building by the Indian Green Building Council.
But it is not Agarwal’s rigid focus on blending a bold stroke of engineering—the towers employ curvilinear geometry and come together at the centre to maximise unobstructed views of the city’s stunning skyline—with eco-conscious practices of global standards that draw attention first; nor is it One Avighna’s 278 sprawling ‘sky villas’, replete with hurricane-proof toughened glass, 25 ft-high landscaped decks and plunge pools, that have been designed by roping in consultants from all over the globe and more than 300 workers from Gulf Cooperation Council (GCC) countries. Rather, all eyes are on the project because its success could influence the course of the city’s growth—for One Avighna Park is the first project in Mumbai to be approved under the Cluster Redevelopment Scheme floated for Greater Mumbai by the Maharashtra state government. Under this scheme, buildings that are at least 30 years old or certified unfit for human habitation, and housed on a minimum area of about one acre, are jointly taken up for redevelopment. “Mumbai is space-starved, and small-sized developments are not helping the city’s infrastructure problems. In small projects, due to space constraints, developers are unable to provide sufficient open spaces and amenities such as sewerage treatment plants, etc, which are the absolute needs of the hour,” says Agarwal. “Through cluster redevelopment, the government is encouraging developers to aggregate larger land parcels and develop areas holistically.”
Avighna has already rehabilitated more than 600 families earlier residing in chawls on the plot and also provided more than 200 houses to the Brihanmumbai Municipal Corporation (BMC) in seven 23-storey towers. It is said that developers often leave much to be desired when rehabilitating previous occupants of derelict buildings or structures, but Agarwal beams with pride as he speaks of having provided residents with quality flats that feature floor-to-ceiling windows, firefighting systems imported from Norway and elevators imported from Switzerland. “The towers are the first rehabilitation towers in the city to be certified ‘green’, thus making the houses not a burden on their occupants, most of whom are underprivileged, by substantially reducing running costs. Even when I visit the residents today, they bless me!” says Agarwal. These rehabilitation towers have been constructed in a record 13 months. 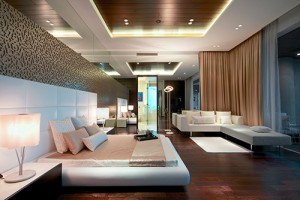 A foray into the world of business
At 63 years, for a man who has started from scratch in different business verticals in three different continents, Agarwal comes across as invariably courteous and soft-spoken. I ask him about the start of his career and those early years and he begins by giving me a glimpse of his family background, “My family originally hailed from Pilani [a town in Jhunjhunu district of Rajasthan], but was based in Mumbai and was one with modest means.” His father Kedarnath had been involved with the share market, but took up a job with the Birlas after he suffered massive losses. “My grandfather and GD Birla had played together as children [the Birlas hail from Pilani]. When he came to know of my father’s financial woes, he offered him a job in his company, which he accepted,” says Agarwal.
The professional association with the Birlas brought its share of rewards not only in terms of the 20 odd years that Agarwal’s father worked for them, but also when Agarwal took his first step in the world of business. Having completed BCom from Mumbai’s HR College, he had joined the Bombay Hospital and Medical Research Centre as a finance trainee. A year into the job, he was approached by Shree Narayan Baheti (the brother of Ashok Birla’s wife Sunanda), who, along with Ashok Birla, was due to start a company, Akai Impex Ltd, for export of textiles, garments, dyes, chemicals, pharmaceuticals and engineering goods. Baheti expressed his desire to have Agarwal on board—an offer which the latter readily accepted.

Ties with Africa
It is while working at Akai Impex that Agarwal realised his aptitude for spotting the right opportunity and taking risks. A chance meeting in 1979 with a few African citizens at Mumbai’s Oberoi hotel led to Agarwal securing an export contract worth tens of crores. “I was having lunch with Mr Baheti, and on the table right next to ours was a group of African citizens. I had this niggling desire to get up and introduce myself to them, which I did.” A few minutes into the conversation, he found out they were on a mission to import goods worth R75 crore from India. Perhaps it was Agarwal’s confident demeanor that impressed them. They extended an invitation to him to come and meet them in Kampala, Uganda. Two days later Agarwal was at Uganda’s Entebbe International Airport. His visit proved to be fruitful, and that was the beginning of his dealings with Tanzania and Uganda. His eyes grow wistful as he talks about how he introduced the Maruti Gypsy in Dar es Salaam, Tanzania’s largest city, for the Tanzanian army and police. 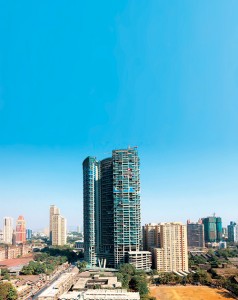 Starting on his own
Between 1979 and 1986, Agarwal would constantly travel alone to Africa and back, spending a week there and a week in Mumbai. With time, a desire to spend more time with his family arose, along with a need to ease the communication hurdles with his important contacts in Africa while staying in Mumbai. “If I would book a telephone call to some person in the morning, the call would come through late at night, which wasn’t useful since all offices there would shut down promptly at 4 pm,” says Agarwal. In 1986, he, along with his family comprising wife Hansa, four-year-old son, Nishant, and two-year-old daughter, Yashika, migrated to Dubai. “Dubai was an apt choice since it provided easy connectivity to Africa by quite a few air carriers, and Mumbai was just two hours away by air.” In Dubai, Agarwal continued his dealings with Africa and also launched his very own Nishant Import & Export Co LLC, venturing into trading in petroleum products, chemicals and gasoline. The company also branched out into shipping through its own line of petrochemical tankers, bringing in revenues in excess of USD 100 million in just over 15 years.

Venturing into real estate
It was son Nishant’s desire to connect with his Indian roots that eventually led Agarwal to venture into the real estate business in India in 1995. According to Agarwal, “Nishant was just four when we had migrated to Dubai. We made sure he received the best education; he attended a British boarding school in Switzerland, before moving to the US to pursue an undergraduate degree in economics from Babson College, and an MBA from the prestigious MIT Sloan School of Management. As a result, he never got much opportunity to visit India.” The doting father decided to find a good house in Mumbai for the family (they already owned a 3-BHK in the city’s posh Breach Candy area, but Agarwal surmised they needed a bigger flat since his children had grown up), but realised that there was a serious dearth of quality high-end real estate in the city. “I found that most ‘good’ properties did not have basic amenities—such as adequate parking for residents and visitors—that we would take for granted abroad,” he says.
Agarwal then decided to build his own ‘quality’ residence and bought a 35,000 sq ft plot at Walkeshwar in South Bombay, where four years later, Satlaj Terraces came up, which had ample parking space. Unfortunately, the noise emanating from the busy Walkeshwar junction proved to be a deterrent and so in 1999, after officially unveiling Avighna India Ltd, Agarwal bought another plot, this time at Worli Seaface, which became the site of one of Avighna’s premier projects: the 18-storey Nishika Terraces, featuring six duplex apartments of 16,000 sq ft each, two manicured gardens, a conference room and a banquet hall. The Agarwals have been occupying its top few floors since 2005.

Charity begins at home
Having grown up in a family with modest means, Agarwal is a man who takes CSR seriously and offers whatever financial help he can to the underprivileged. When asked about his philanthropic initiatives, Agarwal is initially reluctant, but after much probing reveals, “We have teamed up with reputed doctors to conduct free health camps for underprivileged villagers at Vasai, near Mumbai, and Baroda and Rajkot in Gujarat. A health camp at Mahabaleshwar is also in the pipeline.” Other initiatives include funding the establishment of two check dams in rural Rajasthan, tying-up with the Tribal Integrated Development & Education Trust (TIDE) for rural education programmes, sponsoring a computer-learning facility at Lower Parel and upgrading facilities of the ICU at St George’s Hospital, Mumbai.
Philanthropy is evident in his future plans too; after wrapping up the construction of One Avighna Park by the end of this year, he is contemplating the construction of a residential complex in suburban Mumbai for families going through financial crises. He plans to offer these homes at cost. Life has been good to Agarwal, and he is well on his path to spreading the goodness everywhere.