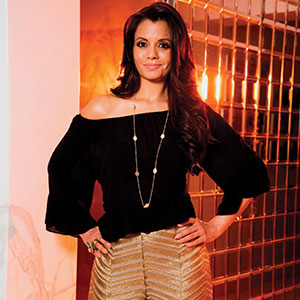 As scion of the Anand Rathi group, Priti Rathi Gupta entered into the world of finance very early in life. Having groomed herself since to be adept in the business of commodities, foreign exchange, management, investments, etc, she straddles a world that even until recently was male-dominated. In her multiple roles as the managing director and promoter of Anand Rathi Share & Stock Brokers Ltd (the security and commodity brokerage business of the Anand Rathi Group) and the founder of Anand Rathi Commodities Ltd (the currencies and commodities wing of Anand Rathi Group), not only has she earned top accolades but also balanced it all with her role as daughter, wife, daughter-in-law and mother with aplomb.

Priti Rathi Gupta is the daughter of Anand Rathi, the founder of the Anand Rathi Group, which ranks among India’s top financial service companies. Her upbringing consequently happened in an environment where finance was the buzzword. Understandably, she picked up her first lessons in finance and stockbroking rather early in life. “When I was 17, I interned with my uncle, who is a stockbroker and used to work out of Mumbai at the time. This internship helped me understand the business of finance really well, particularly how brokerages functioned,” says Priti.

All in the family 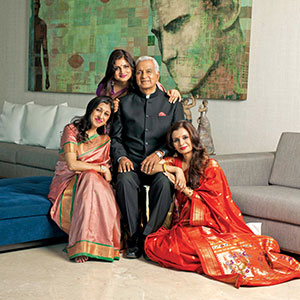 Marriage came soon after. At 19, she was married to Pradeep Gupta, who at the time was running a textile manufacturing company. However, with one of his partners taking interest in starting a sub-brokership (a franchise

of a broking firm), Gupta too got into the act, and as circumstances would have it, soon found himself unwittingly holding the reins of the business. The upshot: he had found his true calling in life. With that, Gupta’s career

changed from textile manufacturing to stockbroking. Priti’s prior experience and expertise in the field came as an added advantage in that she helped him set up the institutional trading desk for their company, Navratan Capital & Securities. Incidentally, around this time, her father, Anand Rathi, too, had just started with his broking firm. As Pradeep Gupta

had an NSE membership and his father-in-law a BSE membership, the duo merged their businesses in 1994, and with that everything came under the

Anand Rathi umbrella. Having grown exponentially since, the group now employs about 4,000 people and is spread across 800 locations in the country, offering a diverse range of services that include wealth management, investment banking, corporate finance and advisory, brokerage and distribution services in the areas of equities, commodities, mutual funds, etc. 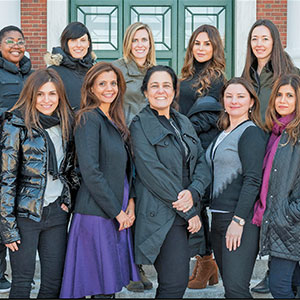 As for Priti, with marriage came a new set of obligations, but thanks to both her father and father-in-law being strong supporters of constant learning, she went on to pursue higher studies. Looking back, Priti says, “When I had entered the industry for the first time, it was primarily dominated by enterprises and brokers who functioned on traditional methods. For instance, stocks were traded in an open arena called ‘the ring’, and for a newcomer to participate in this kind of trading was difficult, especially so for a woman.” Luckily, however, the industry started to move to electronic markets, and a lot of professionals started entering the field. This proved to be a turning point for Priti, who decided to study further and joined S P Jain Institute of Management and Research to study Family Managed Businesses, and eventually also went on to do her executive education from Harvard Business School.

Upon her return—this was in 2004—she set up the commodities desk as part of the larger Anand Rathi Group, and is now known as Anand Rathi Commodities Ltd. It was a new field for both her and the group and certainly not an easy one. “To be able to establish this desk, I had to go to mandis where the physical trade of commodities would take place, and that space was a completely male-dominated one,” she says. Moreover, understanding the commodities market was difficult for her, as unlike stock markets, the dynamics of every commodity is different. “It was a challenging experience, but in my opinion, challenges help one grow,” she adds.

Years later, in 2010, she went on to establish Anand Rathi Advisors Ltd, the finance and currencies business of the group, when currency futures came in. In this space, the company currently offers advice on currency fluctuations, on managing corporate portfolios and everything related to currency hedging. Having come a long way since, today as the managing director and promoter of the Anand Rathi Group, Priti’s responsibilities include talent management, human resources, strategic planning, marketing, leadership and financial planning. She ensures that the organisation has the right processes needed to equip, enable and authorise professionals to run various businesses, and that apart, strategises where the business should be and how it should grow. Besides, she ensures that the culture of the organisation is driven by the top leadership and looks to continuously drive innovation within the business and its various products.

Priti has been on a long journey to be where she is today. Not only are her achievements worthy of commendation, but they have also brought her several prestigious awards. These include the ‘Award for Special Contribution to Commodities Business’, won at the Zee Business Best Analyst Awards, 2013, where she was felicitated by Shri Narendra Modi

(now the Prime Minister of India); the award for ‘Best Contribution in Investor Education and Category Enhancement under Currency Broking’, from Bloomberg UTV in 2011; and ‘Woman Leader of the Year (Financial Category)’ By Women on Top and NDTV Profit in 2011.

Surprisingly, for a woman who says she has finance in her DNA, Priti’s love for art and culture is just about as intense. A trained classical singer and a painter, for a long time she couldn’t make up her mind as to what she would like to pursue, until she set up a film fund. “I realised that films were my calling,” she says. “Films are where you can get all the arts together, be it music, acting, poetry, or literature.” Accordingly, in 2013, she started her own film production venture called Ishka Films Private Limited, which led to the production of the film Waiting in 2015. She is

also the producer of an upcoming movie Karwaan, alongside Ronnie Screwvala.

But all said and done, the question that arises is how she balances a high-profile career with her domestic responsibilities so deftly. In response, she says, “I think it is important for people to put aside notions about what one needs to do to be classified as a good mother, wife, daughter-in-law or businesswoman. As a mother, I know my son needs me to give him the right kind of guidance, as opposed to me simply spending all my time at home with him.” As a businesswoman, she lays great store by communication and intent, spending time wisely and building relationships through effective communication.

Away from work, she loves to cook, listen to music, go for a long walk every day, or go for a drive all by herself to bust stress. 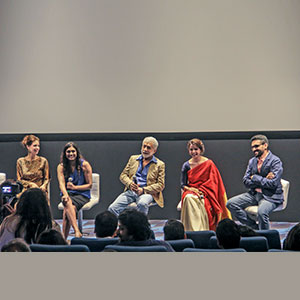 With regard to future plans, Priti Rathi Gupta is all set to launch a new financial planning product in 2018, aiming to inspire a new wave of financially fearless women. This product will serve not just as a financial planning platform, but also an educative portal and community of financially empowered women. She is also keen on driving equal opportunity for women directors, scriptwriters and producers in the film industry to tell their stories and enable them to achieve their goals and dreams. And, last but not the least, she would like to direct films at one point in the future.