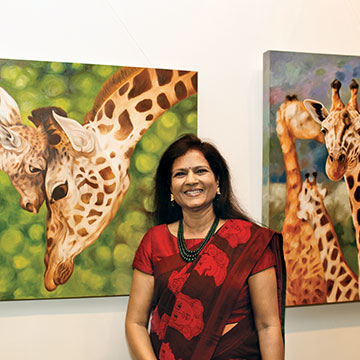 While photography continues to be a generally admired but fairly specialised medium for portraying nature, there is something to be said for art that does not just illustrate the reality of nature, but also gives you someone’s interpretation of it. Such art involves both skill and imagination, and Sushma Jain’s first solo exhibition titled ‘A Tale Untold’ that was held at Jehangir Art Gallery in Mumbai from August 22-27, 2018 had both of these.

The riveting canvasses, rendered in oil paint draw inspiration from the natural beauty of animals in the wild and verdant, pristine landscapes. The majority are based on photographs that Jain clicked with her camera during visits to national parks, forests and other charming locations across the world. She says, “This exhibition was an opportunity for me to present these beautiful wild animals in their natural environment and sensitise viewers to the importance of wildlife protection and conservation. Similarly, I wanted to present landscapes that are unspoilt, which again drive home the point of being conscious about our natural resources.” 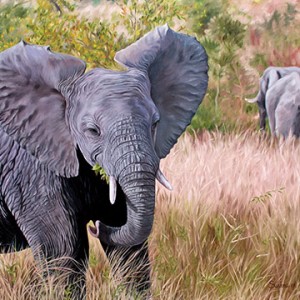 Originally hailing from Churu in Rajasthan, Jain was born in Bankura, West Bengal in 1958. Her great-grandfather, Jaidayal Goenka, was the founder of Gita Press, Gorakhpur (one of the largest publishers of Hindu religious books) and Gita Bhawan in Kolkata and Rishikesh. Jain reveals with pride, “He was famous for his pravachans [sermons]. Even today, many Marwari families keep his photograph in their puja rooms.” Mohanlal Goenka, Jain’s grandfather, was a rich trader who continued the family’s tradition of philanthropy and was fondly referred to as ‘Bankura’s Gandhi’. He built schools in and around the district, sponsored the construction of two bridges and a few road projects and ran free eye camps for the needy. Jain also fondly remembers her father, Madhav Prasad Goenka, a scholar with diverse interests such as art, literature and photography, who supported her in her pursuit of art during childhood. She says, “He was a poet and published two books: a translation of Rabindranath Tagore’s Gitanjali from Bengali to Hindi and Mere Man Ki Baat, a compilation of his own poems. That apart, he was the editor of Geeta Patrika and actively participated in building and managing Geeta Mandir, both from Kolhapur.”

Engaging in art early on

It was a large, joint and traditional business family that Jain grew up in. Speaking about how her childhood years unleashed her creativity, she says, “My house was always full of people who were engaged in social activities. I was encouraged to pursue art, dance and music.” For Jain, the passion for depicting the world around her through art took root when she was a child, and her efforts won her prizes in painting and crafts at school. As her daughter Neha Bagaria writes in her blog, “When my mom was a little girl, it became obvious from the medals and awards stacking up on her shelf that she had a natural talent for art. Academia had no interest for her and she spent her schooldays sketching her teachers’ expressions instead of absorbing their teachings.”

Jain, who completed her graduation from Sophia College for Women, Mumbai, is largely a self-taught artist. But, over the years, she cultivated her talent with fervour by pursuing formal art courses, thus building a solid foundation while nurturing her creative side even after she got married and was raising a family. She completed a foundation course at Indian Art Institute in 1975, the Art Teacher Diploma at J J School of Art in 1991 and a screen-printing course at Sophia Polytechnic College in 1995. She also joined Central Saint Martins School of Art and Design in London to pursue 12 courses on approaches in art. A flair for realistic painting Apart from oil paints, Jain has extensively experimented with charcoal, crayons and

A flair for realistic painting 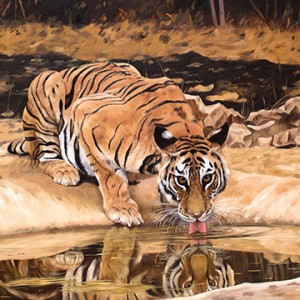 Apart from oil paints, Jain has extensively experimented with charcoal, crayons and watercolours. She finds inspiration in nature and renders her subjects realistically and has come to specialise in human forms, landscapes, portraiture and wildlife. Of these, painting wildlife on canvas has always given her the biggest joy. “For me, it is a way of expressing my love for animals,” she says with a smile, adding, “When I paint them on canvas, I feel like they have come alive and are speaking to me.”

Be it a magnificent tiger having a drink at a pond, a leopard with her cubs, or a mother duck and her ducklings sailing through the water, every painting by Jain is incredibly lifelike. In all cases, she manages to highlight every conceivable detail of the subject by painting every facial feature, strand of hair and patch of skin with expert strokes of the brush. Eyes are an important element when painting in a realistic style, and in every portrait, she makes sure that they have a lifelike glint and reflection, thereby making them appear convincingly alive. Even her paintings of landscapes, featuring everything from icy winters and open grasslands to tumultuous ocean waves and tranquil waters with moored boats, seem incredibly real, signifying journeys undertaken, or ones that are about to commence. 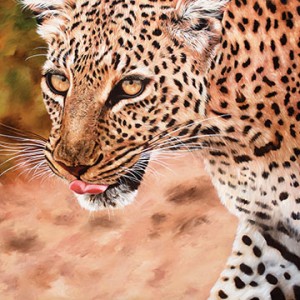 Jain says that despite taking breaks from art to devote time to her family, she has always returned to her passion with renewed commitment and spirit. And over the years, her hard work has paid off, with her artworks finding favour with people even beyond her extensive circle of family and friends. Jain states, “In 2007, my painting ‘Endless Journey’ sold at Khushi Charitable Art Auction. A year later, my painting ‘Gajanand’ sold at a charitable auction for a children’s cancer hospital in Singapore.”

But, for an artist, staging an exhibition to display artworks is often the best way to tell one’s story to the outside world, and for Jain, this momentous occasion coincided with her 60th birthday. However, convincing the reputed Jehangir Art Gallery in Mumbai’s tony art district of Kala Ghoda to exhibit a fresher’s paintings was no easy task, and Jain says, “To make matters worse, the gallery was more interested in landscape or abstract art and not the realistic wildlife art that I specialised in.” Nevertheless, determined to get the gallery to say yes, she created a new portfolio of landscape works showcasing different complexities. “The gallery agreed to let me exhibit, and therefore, at my first solo art exhibition, a combination of my wildlife and landscape artworks have been featured,” explains Jain.

The exhibition’s inauguration was a glitzy affair, with Jain’s collection of oils on canvas eliciting warm words of praise from guests of honour Nita and Mukesh Ambani (of Reliance Industries Limited), and the large gathering of entrepreneurs and art enthusiasts. So much so, that several paintings were sold just in the first few hours! 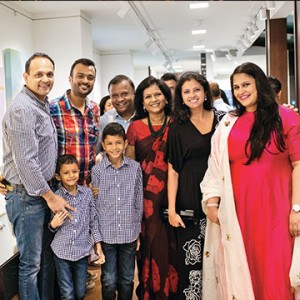 Organising one’s first art exhibition can be challenging, considering the nitty-gritty involved and unexpected situations that it can throw up. But, on this artistic journey, Jain’s family has been her biggest support, and she affirms this by saying, “My husband Anand [Chairman, Jai Corp Ltd] continues to be my rock and the force behind my new adventure. My son Harsh [CEO and Co-founder, Dream11] and daughter-in-law Rachana [dentist and Founder, ToothCraft] mobilised all resources to ensure a successful first solo show. And my daughter Neha [Founder and CEO, JobsForHer]— who is the one who pushed me to pursue my art professionally—is thrilled to see me so re-energised, recharged and deeply immersed in my passion.” She also appreciates the support extended by her son-inlaw Anurag Bagaria (Managing Director, Kemwell Biopharma) and grandsons Yuv and Dev Bagaria and Krish Jain.

How does she plan to take her artistic journey to the next level? Jain replies, “Though I am an animal lover, my paintings are an amalgamation of various natural elements. Therefore, in future, I want to continue my exploration of nature by painting animals, landscapes and the human form.” And those who know her, know that she will achieve this all, while expertly managing her household, family and social expectations, as always.