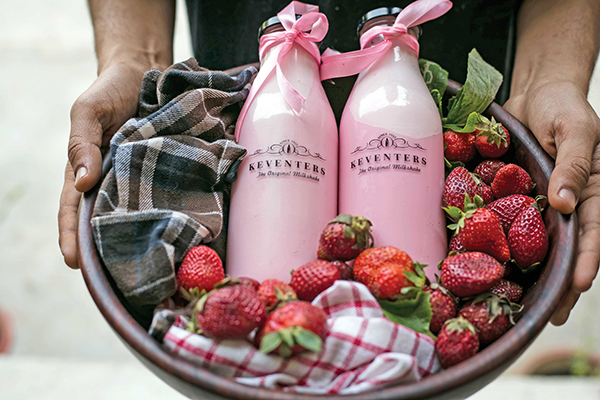 It was in 2015 that Agastya Dalmia, grandson of Ramkrishna Dalmia and scion of the illustrious Dalmia family, decided to revamp the iconic brand ‘Keventers’.

MARWAR takes a look at the 27-year-old’s journey so far.

AGASTYA DALMIA CLAIMS THAT HIS JOURNEY HAS BEEN FAIRLY interesting so far. He says, “I remember, sometime in 2015, my friend Aman Arora and I were generally having a conversation about things that we grew up with. Aman and I had a good working relationship since we had already collaborated to establish Delhi Street Football, a concept through which we organised matches in Delhi and Rajasthan for football enthusiasts.” A revamp and relaunch of the iconic ‘Keventers’ brand was a culmination of that casual conversation.

For those who may be unfamiliar with the name, Keventers is a nonagenarian brand known for its milkshakes that date back to 1925. The story behind its legacy began in 1880s when Edward Keventers, a Swedish dairy technologist, made his way to Indian shores. He took over the running of the Aligarh Dairy Farm in 1894 and turned it profitable. Business was expanded to other cities soon, including Calcutta (now Kolkata), Darjeeling and Shimla.

Eventually, a huge dairy plant was set up in Delhi’s Chanakyapuri area. People soon came to associate the brand with butter, cheese and milkshakes.

After Independence, Keventers was acquired by the Dalmia Group, under Ramkrishna Dalmia. It went on to become a supplier of milk powder for the Indian Army. The government later acquired the land from Keventers, leading to the closure of the dairy factory and the dissolution of the brand. However, Ramkrishna Dalmia’s grandson, Agastya Dalmia, had other plans.

The beginnings
A scion of the illustrious Dalmia family, Agastya Dalmia did his schooling from Sanskriti School in New Delhi. He then went on to pursue a BA (Hons) in English from Hindu College, under Delhi University. Being part of a business family, he had spent most of his life among generations of entrepreneurs. Hence, his decision to start something of his own was only natural.

The 27-year-old says, “The Marwari community as a whole is known for its business acumen, knack for numbers and an inherent enterprising and entrepreneurial nature. That said, in my case, I also come from a family that has a rich business legacy of its own and since childhood, I have been well acquainted with the tricks of the trade.” 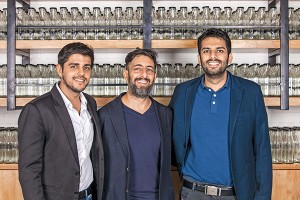 Look and feel
Dalmia and Arora decided to revamp and reintroduce the brand with a new look and feel. However, reinventing Keventers was a challenging task, as was converting the company from a manufacturing unit to a retail business. When the team started out, all they had was an iconic name, its legacy and a bunch of recipes. Going with what they had, the first outlet was opened at Pitampura. It didn’t do as well as was expected. However, this didn’t deter them. The team decided to reopen the outlet at Select Citywalk instead. A complete overhaul of the brand and products was also planned.

By 2016, Keventers had established four company-owned outlets and roped in well-known hospitality expert Sohrab Sitaram as CEO and director, to aid the company in its growth. Additionally, they revised their business model and started to open franchise outlets, which led to phenomenal growth. In just two years, the company grew to 140 outlets across India and Nepal.

Dalmia says, “Honestly, I never imagined that Keventers would receive such an overwhelming response. I am grateful for all the love the brand has received. When we were working towards reviving Keventers, we had perceived that with its history and legacy, it would be well-received amongst Gen X. However, the response from Gen Y too has been phenomenal.” 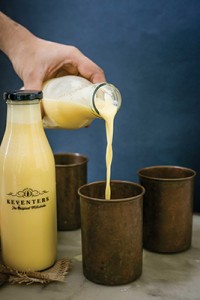 The road ahead
Dalmia and Arora wanted to create a business that had the inherent ability to be scaled on a global level. Furthermore, since their specialisation and historical business was in the dairy sphere, they were familiar with the sector. In addition, customers had always associated Keventers with dairy, so a conscious decision was made to not get into something that would take them away from the pre-existing connect.

Moreover, there were few or hardly any companies specialising in milkshakes. This highlighted a clear opportunity in the beverage segment, which was largely dominated by juices. Additionally, the team wanted to create a distinct identity for their milkshakes as a viable beverage for today’s customer, especially Gen Y/millennials, by creating a modern, cool and aspirational avatar.

There were a range of issues though. There was a strong pre-defined belief in the market that a QSR (quick service restaurant) specialising only in milkshakes could not be profitable by itself. Additionally, Keventers was popular with Gen X, but not Gen Y. In order to succeed, the focus had to be shifted to Gen Y and transform the Keventers milkshake into a preferred beverage option for this target audience. This was a challenge since, in the first place, they were not aware of the brand. Finding great quality milk was another major issue. Dalmia says, “We looked in every nook and corner of India as well as abroad and understood the current fat content of milk and ice-creams before finally choosing the kind we would use for our milkshakes.”

Then, unearthing traditional recipes for the milkshakes was a difficult task since most of the people associated with it were long gone. But what was most difficult was finding the right joint venture partners—someone with similar business spirit.

Growth story
It has been two years since Keventers entered the market, and the corporate team has grown from 20 to 100 employees. Along the way, they have also created and put in place a host of protocols and processes to standardise products and methods of milkshake preparation. Training sessions and workshops have been introduced to ensure that all outlets maintain uniformity and utmost quality in the shakes served. Lastly, warehouses have been established across four cites in India to ensure easy availability of ingredients across all cities.

Today, Keventers has over 140 outlets in India and Nepal. These include Tier-1 and 2 cities such as Delhi NCR, Mumbai, Bengaluru, Chennai, Hyderabad, Dehradun, Ludhiana and Jalandhar, among others. Since its inception, the brand has grown seven times and the hope is to double this figure by the next year. Dalmia says, “My journey with Keventers has been wonderful. From the time we decided to re-establish the brand, no single day has been the same. This has been a great learning experience.”

Now trending
The F&B industry in India is evolving at a rapid pace and an interesting thing to note is that one needn’t have a large product portfolio to grow. Brands that have a single product to offer or a specialsed category of products are doing equally well, or maybe even better than others in the market.

“Although the F&B segment has always been a customer’s market, it has now evolved to become a customer experience-centric market. Brands are now trying to grab attention and loyalty by appealing to a customer’s emotional quotient and enhancing his or her interface with the brand and its experience. Globally, too, there has been a shift in consumer preferences towards healthier food options as well as beverages. Additionally, milk-based beverages are fast gaining prominence amongst consumers,” says Dalmia. 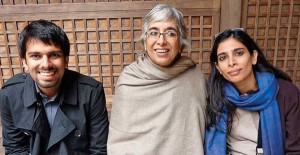 Personal time
In his free time, Dalmia loves playing tennis and organises tournaments and fundraisers to support young sports enthusiasts who might not have the means to pursue their dreams. Besides that, he also spends a large part of his time working with the Amba Dalmia Foundation Trust, where he oversees diverse projects that are focused on uplifting citizens from economically weaker backgrounds. Currently, he is also working to build a social enterprise geared towards providing driving skills to illiterate and semi-literate women, and creating job opportunities for these women drivers.

Coming back to the company that is currently his focus, Dalmia says, “When we started Keventers, our focus was not just to revive an iconic and historic brand but also create a distinct identity for the milkshakes. This has been possible because we refrain from setting long-term goals for the brand and instead set achievable short-term goals to accelerate our growth. The end goal is simple: to create a distinct presence across the world by expanding and entering key markets.” To this end, for 2017 in particular, the plan is to enter the Middle East region, including the UAE, Qatar, Saudi Arabia and Kuwait.
This will be followed by regions in North America and Africa.