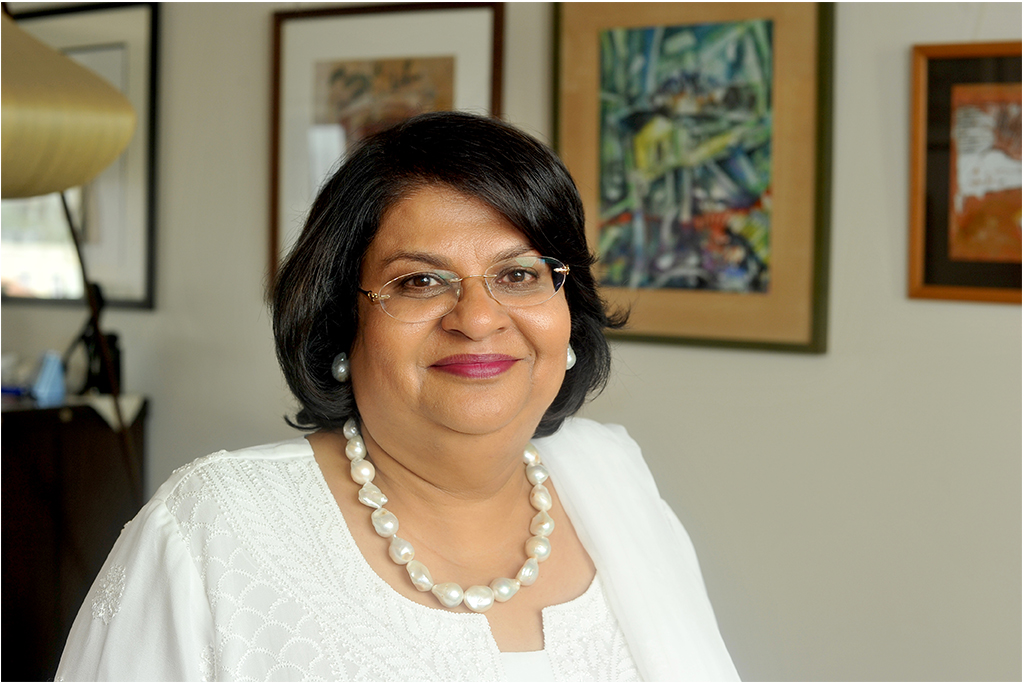 An entrepreneur, a quizzer, a writer and a lady who thinks for others—this defines Archana Garodia Gupta. Born in Kolkata in a traditional Marwari environment, Garodia Gupta’s family moved to Delhi when she was five years old. Right from those early years, she was amidst books, art and culture. While her father, Balkrishna Garodia, was a voracious reader, a classical music aficionado and a world cinema enthusiast, her mother, Chandra Garodia, was ahead of her time and didn’t believe in imposing stereotypes. All these factors came together to give Garodia Gupta, the eldest of five sisters—the others being Aparna, Manjari, Meenakshi and Shruti—a childhood that facilitated her development into a multi-faceted woman and an achiever.

A student of Modern School, Garodia Gupta not only topped in her Class 10 examinations but also represented her alma mater at several inter-school quiz competitions. Later, she pursued an Economics Honours degree from Lady Shri Ram College, Delhi, passing out with a university ranking. She also holds an MBA degree from IIM Ahmedabad, having been amongst the top 15 students of her batch. She has also trained in Indian classical music from well-known gurus, including Pandit Vinay Chandra Maudgalya, Pandit Vasant Thakar and the brilliant Shubha Mudgal. Further, she joined her family’s flourishing textiles spinning business and developed exports of specialised products to many countries.

A woman for the women 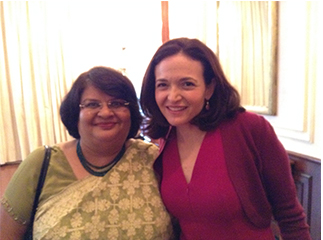 Archana Garodia Gupta with Sheryl Sandberg, the COO of Facebook, in 2014 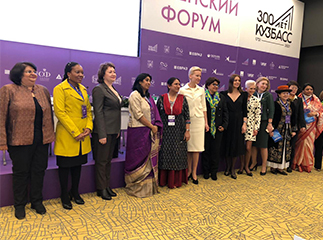 Archana Garodia Gupta representing India at the Women’s Forum in Siberia, with representatives from 18 countries, in 2019

Garodia Gupta plays an integral role at Federation of Indian Chambers of Commerce and Industry (FICCI) and is currently the National Chairperson of the FICCI Micro, Small and Medium Enterprises (MSME) committee. She also works closely with FICCI Ladies Organisation (FLO), the women’s wing of FICCI and has served as its president in 2015-16.

Garodia Gupta has been instrumental in the success of several women’s empowerment initiatives at FLO. She elaborates, “I have been involved with women’s development since the 1980s. As secretary of the Noida Women Entrepreneurs Association, in 1999, I had promoted a women’s industrial park called Mahila Udyami Park in Greater Noida. I introduced a number of initiatives when I was the president of FLO, including skilling programmes launched under WE (Women Empowerment), under which we have trained more than 10,000 women till date. Swayam, a handholding programme for women entrepreneurs, has created several success stories and helped 1,500 women set up businesses.” Today, the prestigious Amity University consults the Swayam mentees for free.

She continues, “I have always felt strongly about the need for women to get connected to e-commerce. We, at FICCI and FLO, tied-up with several portals, such as Amazon, and conducted e-commerce programmes for women. We also tied up with Maruti Suzuki and conducted a driving programme for women, which helped them get jobs with Uber, etc. We have also helped some of them to buy their own vehicles, with car loans from State Bank of India. Furthermore, we tied up with some security companies and conducted 40-day training programmes, which helped them to get jobs as security guards. A number of women, including those from the grassroots and slum areas, have been part of such programmes and are independent and self-reliant today.” Garodia Gupta is also a member of the BRICS Financial Committee from India, spearheading the Small-Medium Enterprises (SME) division.

Also on the board of IIM Sirmaur and Indraprastha College for Women, she shares, “I’m part of the Project Management Committee at IIM Sirmaur, and am having a lot of fun interacting with the architects who are working on the new building that is coming up in Himachal Pradesh. We hope to create the most beautiful IIM campus in the country!”

I have always felt strongly about the need for women to get connected to e-commerce. We, at FICCI and FLO, tied-up with several portals, such as Amazon, and conducted e-commerce programmes for women 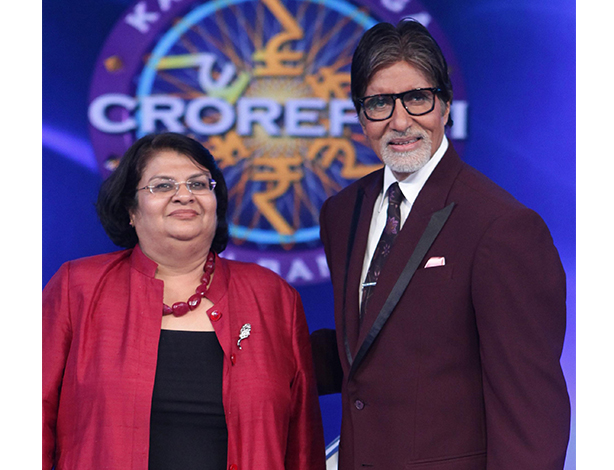 Archana Garodia Gupta with Amitabh Bachchan on the sets of KBC, in 2014

A book a day 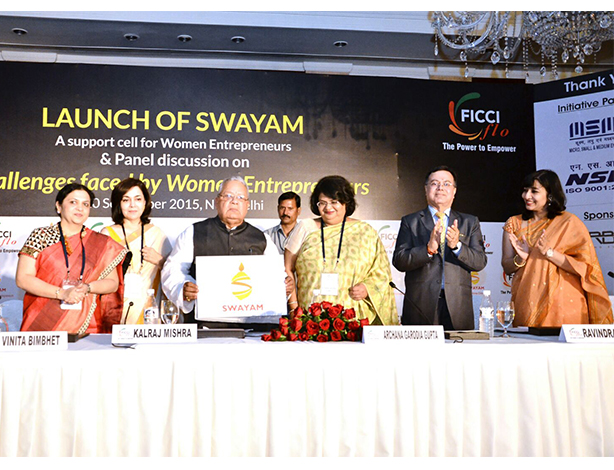 Archana Garodia Gupta with Kalraj Mishra, the then Minister of State for Micro, Small and Medium Enterprises, launching the Swayam initiative of FLO, in 2015

Ask Garodia Gupta about the one thing she loves doing the most, and pat comes the reply, “Writing!” Author of the two-volume The History of India for Children (co-authored with her sister, Shruti Garodia) and The Women Who Ruled India, history has always interested her, and this reflects in her writings too. “Books are an integral part of my life. I can safely say that I have read almost one book a day all my life!” She also loves to travel and has visited more than 50 countries, including several historical places.

Garodia Gupta is also one of India’s leading quizzers, having conducted many quizzes in India and abroad. In 2001, she won the highly-coveted BBC Mastermind India competition. In 2002, BBC Mastermind declared her the Champion of Champions.

Garodia Gupta has also been part of the expert panel in the popular television show, Kaun Banega Crorepati, behind which she says there is an interesting story. She shares, “In 2014, I received a call from Kaun Banega Crorepati, asking me to be part of ‘Three Wise Men,’ which is what the expert panel is called in the original, international format of the show. I told them it would be close to impossible to be part of the panel, as I am not a man! That is when they renamed it as ‘Triguni’ (meaning ‘the three knowledgable ones’) in the Indian version of the show, simply to include me and other women, as part of the expert panel.” 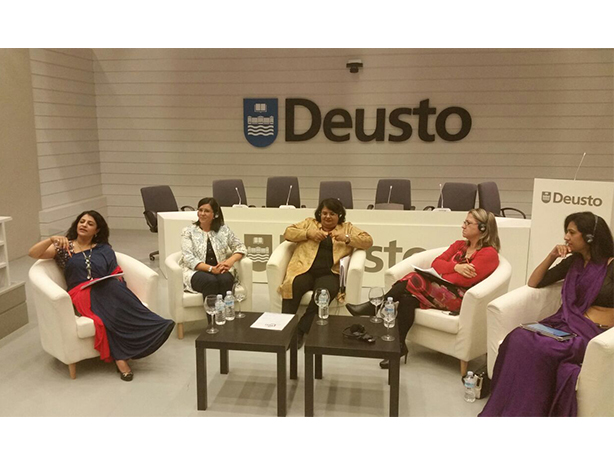 Archana Garodia Gupta in Bilbao, Spain, leading a FLO delegation at an India Spain summit, in 2015

On the home front, Garodia Gupta notes that she is blessed with the support of her family, particularly her husband, Manoj Gupta, who she aptly calls her ‘support system’.

Garodia Gupta truly believes that all things are possible for those who dare, her success formula being—it is important to follow your passions; to not hesitate; to not get intimidated; and do what is in your heart and mind, without the fear of failure or ridicule. Inspiring words no doubt, as following them, Garodia Gupta has soared to many new heights and aspires to many more.