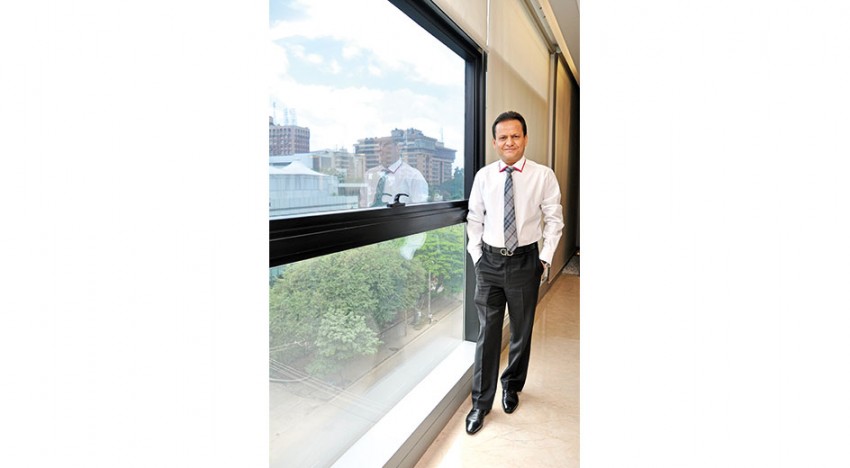 His family migrated from Bangladesh to Kishanganj in Bihar during the partition. He was born here in 1964, one of ten siblings. Having seen his father toil happily to provide for his loved ones instilled in him the values of perseverance and determination—the hallmarks of his enterprise today. His parents created a nurturing and loving environment for them, enabling all the children to be self-reliant and trustworthy individuals. This reflects in the work culture at Salarpuria Sattva today, trust being the secret ingredient of every transaction, as becomes evident from current vice president of the Salarpuria Sattva Group, P K Mishra’s words: “I am particularly proud of the group’s commitment to socio economic values, concern for the environment, commitment to customers satisfaction, with timely delivery of good quality end products. Trust is the single driving factor that has helped us connect with our customers.” Agarwal’s parents, who live in Bengaluru with him and his family, must be ever so proud of him.

A head start
Growing up, little did he know that the decisions he would take between 1979 and 1986 would transform his life. Each step in that journey was destined to bring Bijay Agarwal closer to his mentor, G D Salarpuria. In 1980, sixteen and sincere, a young Bijay moved to Raniganj in West Bengal to pursue his education. He lived with his sister and her family and started helping out his brother-in-law with their novelty store. It is not surprising that the strapping young lad understood exactly what his customers needed and travelled 180 kilometers to and from Kolkata to pick up merchandise for them. Nor is it surprising that his innovative sense and keen marketing abilities catapulted the store to the number one outlet in Raniganj. What is surprising is the humbleness he exuded after acquiring this wealth of experience and success. The same warmth is palpable even today.

In 1984 Agarwal moved from Raniganj to Kolkata, and in 1986 he forayed into the construction space, thanks to a job he picked up at Vaishali Finance Corporation. Even today, Agarwal’s eyes sparkle with pride and nostalgia as he speaks of joining the company headed by his mentor, G D Salarpuria. As a mentor, he was tough, yet kind hearted and generous. He was fond of young Bijay and treated him like a son. Salarpuria trod the path of progress and he was exemplary. His journey was marked with compassion and discipline towards value-based sustainable growth. “Live a high moral life and not a high material one,” he would say, “because it might become difficult to step down someday.”

Under Salarpuria’s tutelage, the opportunity of a lifetime came knocking for Agarwal when the company needed help to retrieve funds that had been invested with a promoter who was into the business of construction. The task was to complete a half-finished building. The company did fund construction projects, but did not have any practical experience in the field. Agarwal was chosen to lead the project. Unsure, nervous, yet determined to excel, he took on the task. The Kolkata-based project involved development of a sizeable three lakh square feet. But, Agarwal took the plunge head-on and emerged victorious. After this success, he became the company’s Man Friday for every real estate venture. From farmhouses and buildings in Delhi to developmental projects in Nagpur and Hyderabad, he oversaw all construction activities of the company. A friend from his olden days recounts, “I would never have known that this was the same Bijay I cycled around with in the streets of Raniganj.”

The road to success
In 1993, Bijay Agarwal laid the foundation of a strong, loving and enduring family life with the wonderful Niru, Salarpuria’s niece. Around this time, he also visited Bengaluru to assess a plot available for sale and developed it into a 20,000 sq ft commercial building that we know today as Money Chambers. The city grew on him and he decided to move there to set up one of India’s finest construction companies.

With great success come great associations. In 2002, the foundations Agarwal had been laying down attracted large international organisations such as Lucent, Intel, Ocwen, Hewlett Packard and India’s own Big Bazaar. They wanted him to recreate the magic that had become synonymous with the Salarpuria Sattva Group. A whole new world opened up for the group from 2004 onwards when the technology boom changed the city of Bengaluru. In the same year, under Agarwal’s leadership, the company launched GR Techpark that covered an impressive 1.5 million sq ft. From 2004–07, his company concentrated on developing information technology parks and commercial properties.

Started initially as The Salarpuria Group, natural evolution and diversification led to the formation of the Salarpuria Sattva Group in 2008, which blends traditional strengths with forward looking ventures such as aero accessories, e-technology, warehousing, facilities management and education. It is a matter of pride that accessories for the most sophisticated defense aircrafts are made here and exported globally. In the same year, the company also revised their portfolio and shifted their interests fully from commercial spaces to 60 per cent residential spaces and 40 per cent commercial spaces.

Along the way, the Salarpuria Sattva Group won prestigious awards such as The CNBC Awaaz Real Estate Award, The ET NOW Award for ‘Best Residential Project’, and The NDTV Award for ‘Best Residential Project’ in the ‘Premium’ category. Also CRISIL, a global independent analytical ratings agency, has given the Salarpuria Sattva Group an ‘A’ rating, the highest in the country today.

Philanthropic leanings
Agarwal, however, is not involved with building lasting structures only. Along with wife Niru, he is raising a family and inspiring their two children to be good, responsible and concerned citizens. In 2009, as a natural extension of their desire to impact the sculptors of tomorrow, Bijay and Niru founded the Greenwood High International School, the only school in the city to have won seven national awards and an OHSAS 18001:2007 accreditation with Safety and Health Management Systems. Three more schools are also coming up in Bengaluru, Kolkata and Nagpur. That apart, the Salarpuria Sattva Group’s CSR activities in Bengaluru include training poor youth from both urban and rural areas to integrate them into the construction workforce; extending support for the Agrasen and Agarwal communities; and providing free healthcare to the poor—in partnership with the Sri Satya Sai Baba Hospital—by setting up a 20,000 sq ft charitable block for outpatients and those attending to them. The group has also adopted orphanages and provides scholarships for children who are blind and less privileged. Agarwal’s core team, many of whom have been with him for over two decades, echoes this sentiment of contributing to lasting, inclusive societal growth. “I have been with the company right from inception and have learnt and grown so much as the company grew to be a leading and trusted brand. The warm and enabling environment provided by Mr Bijay Agarwal all these years helped me do better year after year. Today, I am proud of what the company stands for and for being an integral part of this wonderful growth story,” says Sanjay Agarwal, Group Head, Sales and Marketing.

Having read about Bijay Agarwal’s courageous journey, it would seem implausible that he fears uncertainty. He does. Hard facts, however, belie his fears. With 15 million sq ft of completed projects, 16 million sq ft of space under construction and another 22 million in various stages of design and development, the group is flourishing under him and growing at a compound annual rate of 30 per cent. To put a positive spin on his fears, all Salarpuria Sattva project constructions use the latest technologies and in strict conformity with international norms. Plans are also underway to ensure their structures are earthquake resistant and that no uncertainty has been overlooked or safety measure compromised. Consequently, all the occupiers
of the group’s 15 million sq ft of constructed space are happy people today.

Salarpuria Sattva’s 1,600 employees are just as happy, claims Mishra. “My perception is that employees who feel assured that the management is concerned about their overall well-being, are more productive, more satisfied and feel more fulfilled. Satisfied employees mean satisfied customers, and that leads to profitability. Trust and value for human beings is something that is not only preached but also practiced by our group. This is the secret of our happiness with the group and our leader, Mr Bijay Agarwal.”

Bijay Agarwal is creating value, creating shared success and living with a passion that becomes a true Marwari entrepreneur. He is educating himself too as he journeys ahead. In fact, he just completed a programme at Harvard Business School. It goes on to prove that he is unshakeable and he is not tired. For the sake of great constructions, we hope he never is.