Left: Hanwant Singh Rathore (second from right) posing with some of his team members at Camel Charisma.

Award-winning German veterinarian Dr Ilse Kohler-Rollefson’s visit to Rajasthan in the early nineties was a godsend to the nomadic camel herding communities of Rajasthan, or the Raika, though little did they realise it at the time. Having worked tirelessly for over 25 years to revive the dying Raika way of life, hers is an inspiring story.

Thoughts of the thar desert conjure up images of arid terrains, undulating dunes, camel trains and their turbaned keepers, who have been their custodians for centuries. Yet, this perfect desert idyll has seen change over the last few decades. A gradual dwindling of pastoral lands and a general apathy towards nomadic camel herder communities like the Raika, who have herded camels for centuries in the Thar, have forced many of them to abandon their culture and traditional way of life, and as a consequence not only camels but the Raika’s unique knowledge systems are disappearing too. Given this unfortunate state of affairs, Dr Ilse Kohler-Rollefson stepped in to bring about change, which she has, against the odds, through her dedicated and tireless efforts. 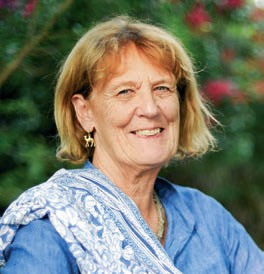 “I first came to Rajasthan in 1990-1991 on a fellowship from the American Institute of Indian Studies to study camel socioeconomics and management practices,” says Dr Kohler-Rollefson, whose multifaceted career began as a veterinarian in Germany, where she was born. However, soon disenchanted with the profession, she applied as a volunteer on an archaeological excavation in Jordan, taught herself archaeozoology and spent the next 10 years of her life identifying animal bones from archaeological sites, as a specialist. While in Jordan, fascinated by camels and the Bedouin, she went on to do her PhD on camel domestication and later a post-doctoral degree as well on the evolution of India’s camel culture, before arriving in India.

“India seemed a good place to pursue my interest in living camel nomads, as it still had the world’s third largest camel population of about 1.5 million at the time,” says Dr Kohler-Rollefson. In Rajasthan, the Raika way of life struck a chord with her at once, and in pursuit of what essentially was a research subject, she found her life’s calling. “I was fascinated by the Raikas’ love for their camels and the humane way they treated them. The human-animal relationship was so caringPHOTO BY DIPTI DESAI SARKAR and different from what I was used to in Germany,” she says. But the Raika pastoralists were not going through the best of times. Seeking to make a difference to the crisis being faced by them, she decided to intervene. But reaching out to the Raika proved to be far from easy. The Raika were clueless about what she wanted and thought engaging with her was a waste of time. It was at this juncture that help came by way of her acquaintanceship with Hanwant Singh Rathore, a Rajput who hailed from a family of traditional camel traders. 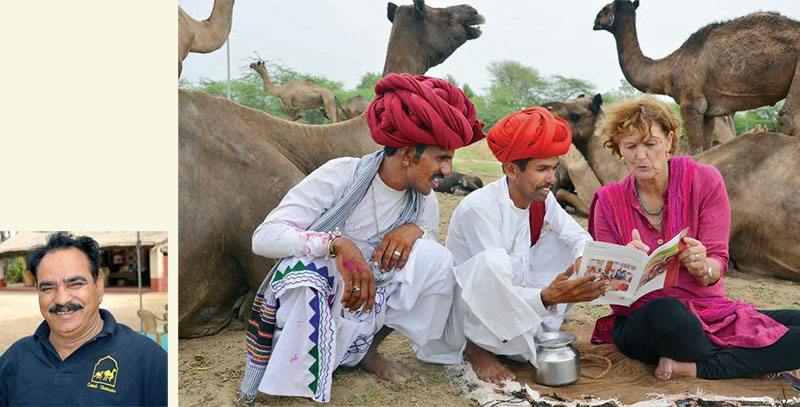 “My nana, Bhanwar Singh Shekhawat, would buy camels from Tilwara and sell them to farmers in Sikar,” says Hanwant Singh Rathore, who now works with Dr Kohler-Rollefson to conserve camels and the Raika way of life. Talking about Dr Kohler-Rollefson, whom he first met in Jodhpur, he reminisces how she needed help to meet camel herders and how his friend, the tourist officer, had introduced them to each other, knowing about the good relations that the Raika and the Rajputs traditionally shared. Taking heart, Hanwant Singh convinced the Raika that she was genuine and had come to share her fascination for camels, and with that Dr Kohler-Rollefson’s managed to make headway with the Raika, initially providing medicines for their camels. The breakthrough did not come without its share of problems though, but all that is a thing of the past. A lot of water has flowed under the bridge since then and today the Raika not just trust her, but also treat her and her team with utmost respect.

Hanwant Singh, on his part, after meeting Dr Kohler – Rollefson, too felt inspired to work towards preserving camels and the traditional practices of the Raika and continues to do so till today, in association with Dr Kohler-Rollefson. 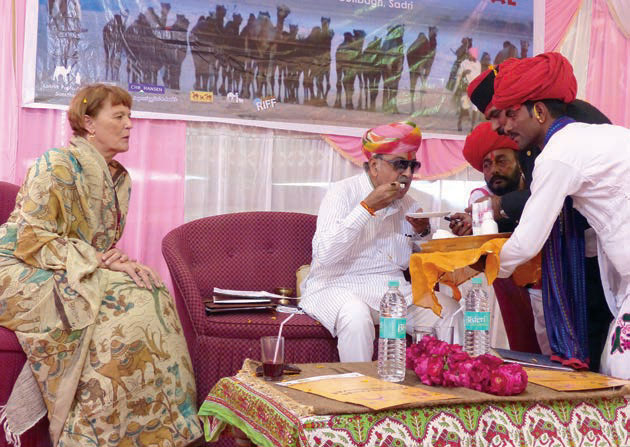 To revive the region’s unique camel culture, one of Dr Kohler-Rollefson’s very first projects was the League for Pastoral Peoples (LPP)—now renamed League for Pastoral Peoples and Endogenous Livestock Development. Founded way back in 1992, through LPP, she sought to collect donations to buy medicines for camels. However, she soon realised that not just the Raika but pastoralists all over the world too were facing crises, and this prompted her to launch her pioneering mission of supporting pastoralists across the world through LPP. “We were the first organisation with a global mandate to support pastoralists everywhere in the world,” she says. “As of now, there are several organisations with the same goals, but LPP has spearheaded much of the work, especially at the UN level.” 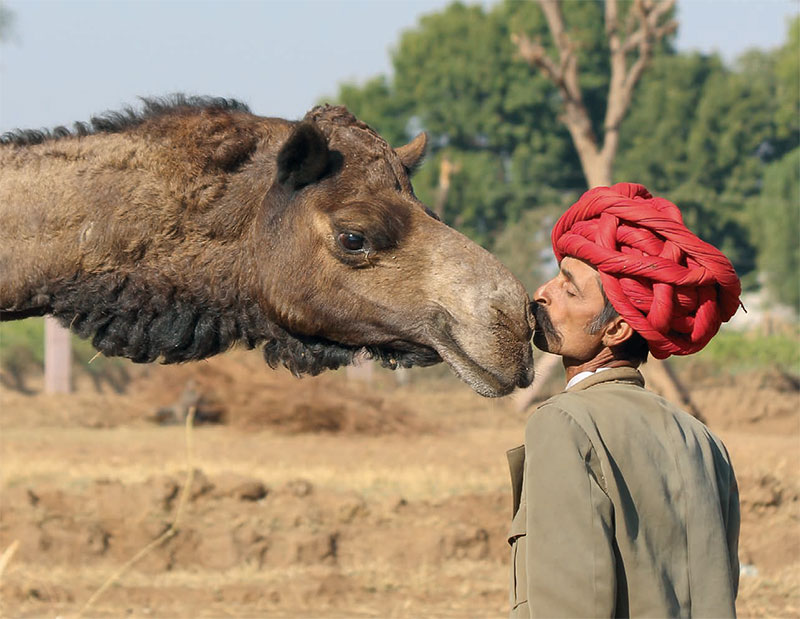 After working for almost two decades, it was observed that more needed to be done to ensure that camels provided a more viable livelihood option for the Raika, and this led to the foundation of Camel Charisma by Dr Ilse Kohler- Rollefson and Hanwant Singh Rathore in 2010. “Camel Charisma seeks to generate income from camels for the Raika so they can continue keeping them. To do this, we have developed various value chains for milk, wool, poo and also eco-tourism,” says Dr Ilse Kohler-Rollefson. Thus, Camel Charisma promotes camel milk, makes camel poo paper (it being the first and only organisation in the world to do so), makes products from camel wool and offers the Raika experience in the form of ‘Chaifari’ to tourists, we learn from Hanwant Singh.

To do all this, a small paper factory and a wool processing unit have been set up in Sadri. Earlier this year, a state-of-the-art micro-dairy was formally inaugurated too, with camel breeders from all over Rajasthan attending the joyful event. Named Kumbhalgarh Camel Dairy, it was intended at enhancing pasteurisation and cooling of camel milk, a process that had been started earlier by Dr Kohler-Rollefson and her team using very simple methods, to ship frozen camel milk to consumers all over India.

Reflecting on the success of the venture, Dr Kohler-Rollefson says, “Though we have encouraged the Raika to hang on to their camels, it is only now that we are making a positive impact by enabling them to earn income from camels.” 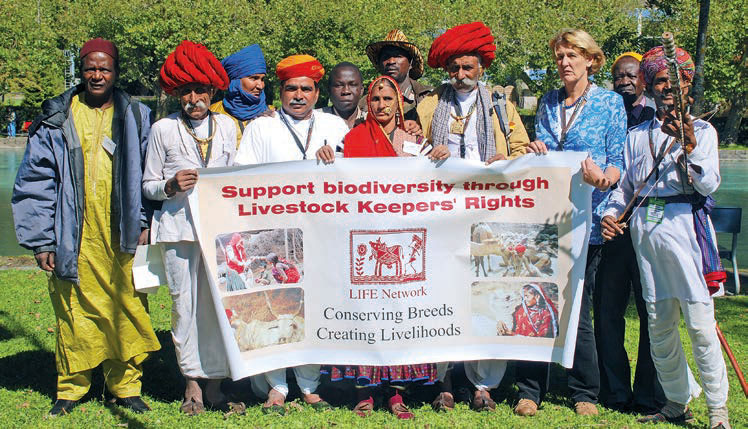 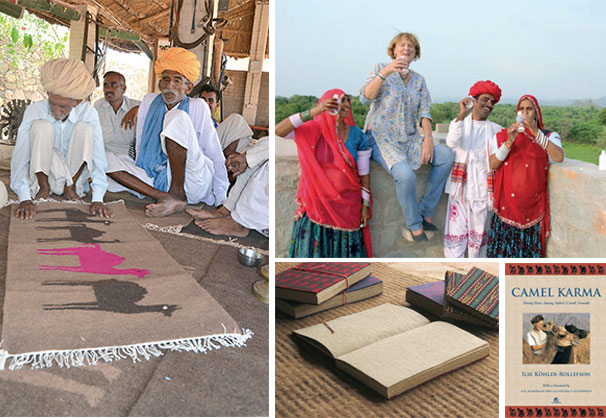 These apart, a four-day programme called ‘Raika Journey’ has also been developed that immerses people into Raika culture. Further, the Raika are encouraged and assisted to raise their voice and push for supportive policies and grazing rights, something which Hanwant Singh says he loves doing. Beyond these, Dr Kohler- Rollefson has other achievements to talk about too, such as making the Raika camel culture famous throughout the world (as an example of a man-animal relationship that is ethical, environment friendly and saves the biodiversity) and assisting Raika leaders to participate in UN level meetings and showcasing their traditional knowledge. She has also written a book titled Camel Karma: Twenty Years Among India’s Camel Nomads and many articles and booklets about the Raika besides. All these achievements, needless to say, are worthy of commendation and have brought prestigious awards for Dr Kohler-Rollefson, including the Nari Shakti Award from the President of India, Shri Pranab Mukherjee, in 2017. Last year, she was also honoured with the Order of Merit by the President of Germany. Further, in 2014, both she and Hanwant Singh Rathore were honoured with the Marwar Rattan Award from HH Maharaja Gaj Singh of Jodhpur.

Beyond the Raika, Dr Kohler- Rollefson says she has had the opportunity to visit and support nomadic camel herders in Iran, Kenya, Sudan and Pakistan also, and recently, her help has been sought to integrate camel culture into the development of the Al Ula World Heritage site in Saudi Arabia. She is also working on a follow-up book to Camel Karma about the different camel cultures of the world. Though it already has been a long haul for the indefatigable camel crusader, the journey, it seems, has not ended with reviving the Raika. On the contrary, on another level, it might have just begun. 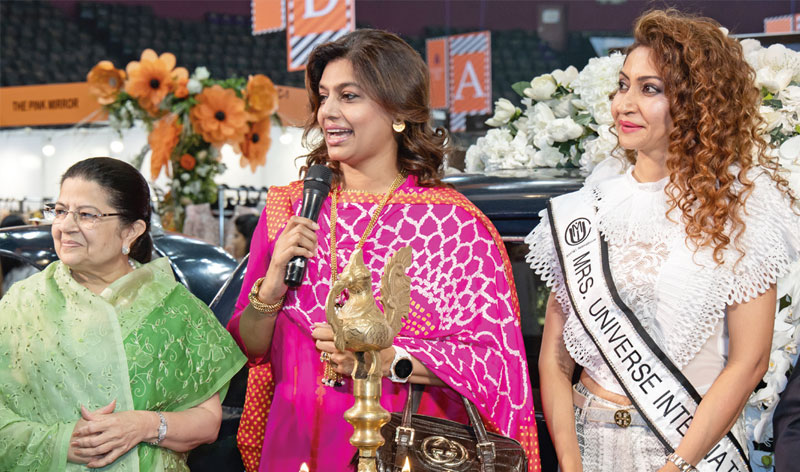 Shopping For a Good Cause