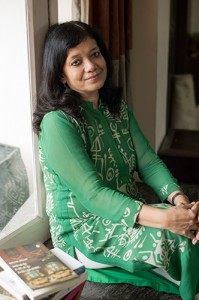 What does being a Marwari in Kolkata mean to you? When did your family move to Kolkata? Do you think life for you would have been different if they had never migrated from Rajasthan?
Being a Marwari in Kolkata is, historically speaking, a juxtaposition against a superior linguistic culture and ethos, which propels one to examine and overcome its shackles. We have come a long way, obviously not just because of this, yet this pressure has played its role.
I was born and brought up in Kolkata. I think my great great grandfather had come here before the First World War. Certainly my life would not have been the same, had he not migrated. All my writing resonates from a sense of displacement and search for a valid identity.

Where is your home in Rajasthan? Tell us a little about your family.
My family came via Bhiwani (now in Haryana), a business hub in those days, probably from Khetri in Jhunjhunu district, since I was a Kejriwal before marriage. The old patriarch made big money during the First World War and built a palatial haveli in Bhiwani. Later he fell to bad times and the family struggled to keep afloat. My great grandfather had contributed to magazines of his time. So I am not the first writer in the family! 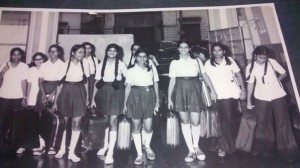 How often do you visit your home town?
There have been long gaps. Now I go either for the Jaipur literature festival or for jaat at the family deity temple after a grandson is born. I find myself talking in Bengali to the local people.

Are your protagonists always Marwaris from Kolkata? Do they share the same angst and yearning for their roots that many in your community do?
Well, most of them are, except the fourth novel Ek Break ke Baad, which has a Tamil Brahmin as the protagonist. I would not say that my characters have a deep yearning for their roots. It’s more an awareness of being different and angst for not having owned this piece of earth since ever, as say, a Bengali would feel. I also must say that all of them yearn equally to be absolved of the stigma of being a Marwari, as the word denoted at one time. A student from University of California, Berkeley, who was researching on Marwari writers, was told by a Bengali, what can a Marwari know of writing? He can only write a hundi.

Do your characters have any resemblance to people you know?
All fiction is based on facts, as much as facts are no less than fiction. Although my characters are not just one person, they resemble life; otherwise who will empathise with them? But, if you ask me to introduce you to Kishore babu of Kalikatha Via Bypass, I will tell you that I too am looking for him in Calcutta and that there are German, Italian, and French Kishore babus jaywalking the streets in their countries yearning to rediscover the forgotten idealism of their youth.

Tell our readers a little about your recent novel Jankidas Tejpal Mansion.
It’s the story of Jaigovind, alias Jaydeep, (the writer of the autobiographical novel in the novel), who comes back to a Naxalite-infested Calcutta after studying computer engineering in America in the Seventies. When the Metro tunnel is being dug up, Jankidas Tejpal Mansion, his home on Central Avenue starts tilting towards the road. The desire to save the mansion from being pulled down by the landlord leads Jaigovind to counter the nexus between capital, bureaucracy, politicians and the police. But eventually he is co-opted by the system as all forms of idealism in the great Indian democracy have invariably been.

How does the old crumbling Jankidas Tejpal Mansion form the crux of the story? Does it bring out the concepts of the new replacing the old and the old being neglected in a city of changes?
It’s an allegory of destruction, not only of Jankidas Tejpal Mansion, but of family, community, relationships, values, all our ideas of the sacred, the beautiful and so on. It’s the story of undermining roots and replacing the old heritage with new monstrosities without a sense of history. In a way, the tearing down is a validation of the moneyspeak culture that’s eroding all the four pillars of our democracy.

How real are the fears faced by Jaigovind, the protagonist?
A young lecturer spoke about it at a seminar on the novel: He said he was very very scared because it seemed that the profane had taken over all institutions. You cannot trust anyone around you. The idealism of the first post-Independence generation has waned in the face of reality, leaving a black hole sucking in even the last traces of idealism.

Jankidas Tejpal Mansion has references to a changing Kolkata, the Naxalite movement and the advent of the Metro. How did you weave these elements together?
They are woven together by the lives of people who became the scapegoats of failed dreams which India nurtured during Independence and afterwards. Why do you think Naxalism erupted? Why do you think the mansions on Central Avenue, with hundreds of families, were swaying with every passing bus?

Your first novel, KaliKatha via Bypass, won you the Sahitya Akademi Award. Did that put you under the pressure of living up to the success of your debut novel?
Not really. Once you have the highest award, you could write only to explore more facets of reality. It also gave you a certain amount of confidence.

You’ve written both novels and short stories. Which medium do you prefer?
Novels opened the cosmos for me. They gave me the freedom to write about anything and leave it anywhere I liked. This way a novel incorporates layers and layers of stories like buried cities on top of the last one. I just could not go back to short stories.

You are recognised as an original voice in Hindi literature. Why do you think so few Indians are choosing to write in vernacular languages?
Well, parents are talking to their babies in English. They want them to even cry in English without realising that they are depriving them of the most precious gift of a language, with roots that go down thousands of years. In the caste system of languages, regional languages are like Dalits. Writing in English means more name, fame and money.

Do you prefer to call yourself a woman writer? Do you believe in such labels?
Just call me a writer, the way you don’t call them ‘Men Writers’! We deserve a better place than being a domestic club on the lower margins in the history of literature. It’s really absurd that women who discourse in Hindi cannot understand why a woman like me chooses to ‘write about the nation’ instead of her suppression as a woman. It’s almost like ghettoising women writing. And all this in the guise of liberating women to find their voices!

Have you always wanted to be a writer?
I never knew I could become a writer till I met Ashok Seksaria, a writer/journalist in Calcutta. I started quite late, writing journalistic features in newspapers and magazines. I wanted to protest against so many things. But then I wrote a story on a funny marginalised man and it was much appreciated. The success of the story made me a writer. I was about 30 then. My first novel was published when I was 37.

Which writer has been your inspiration?
Only Ashok Seksaria, who never wrote the novel he aspired to write. He passed away last November at the age of 80.

In your stories, you manage to look for the extraordinary within the ordinary. Is this how you look at life in general?
I live the very ordinary life of a Marwari woman in a joint family. I am a bad housewife and dependent on my two devranis for all possible needs of mundane life. Isn’t it extraordinary that the whole family, not to miss my husband and mother-in-law, has indulged me all these years?

Would you like to see any of your short stories or novels being adapted into movies?
Kumar Shahani had approached me for making a film on Kalikatha, which he considered an epic. It never got started. I often dream of making a short film on one of my short stories…

What other novels and short stories have you written? Any favourites?
I have written about 35 stories. ‘Ek Ped Ki Maut’ is a favourite and so is my first story ‘Aapki Hansi’. I have written three more novels besides Kalikatha and Jankidas Tejpal Mansion: Shesh Kadambari, Koi Baat Nahin and Ek Break Ke Baad. To me all are equally precious and important because they depict a totally different aspect of reality.

Tell us something about your next book.
My next book could be a comic story, like the autobiography of a writer aka housewife. There are numerous hilarious situations in
a family of four generations living together in the same house. Perhaps it will be a dialogue with another writer in an altogether different world.