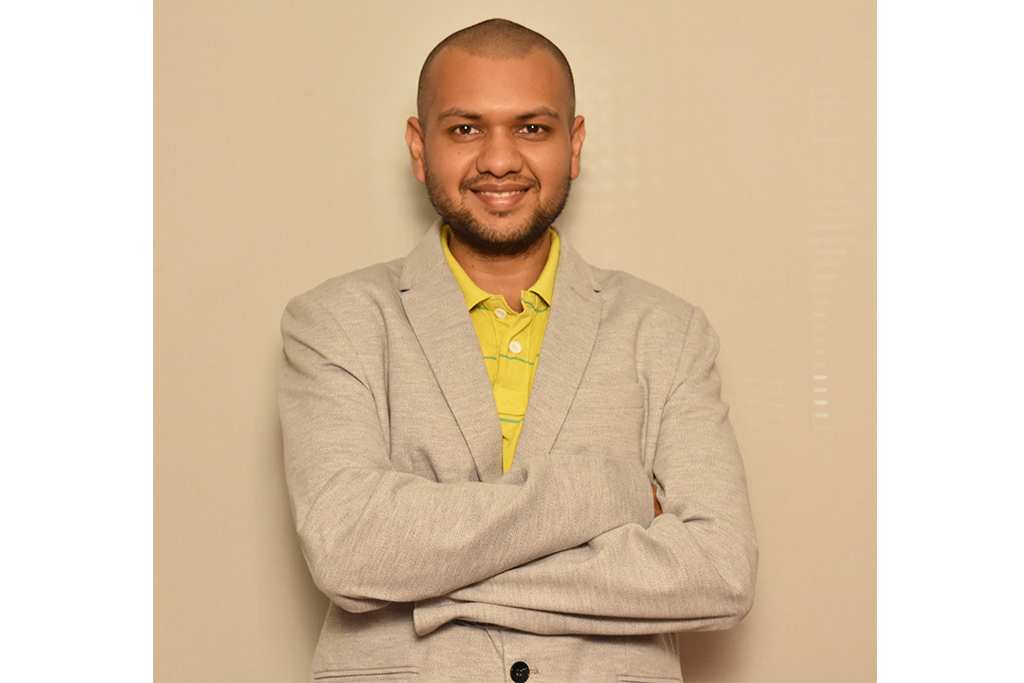 The last few years have seen an explosive rise in online transactions in India, aided by increasing Internet penetration, smartphone usage and supportive government policies. But in a country with 22 official languages, online payment and e-commerce platforms with English language interfaces are usually not able to connect with the growing number of Internet users, who prefer to interact in their native Indian language, or do not speak English, or are not Internet-savvy. Even platforms with complicated digital interfaces featuring many tabs and prompts, pose a challenge for first-time users since they need to read, learn and understand it all to carry out simple transactions.

Enter Niki.ai, a conversational commerce solution that is overcoming these language and interface barriers to provide users a faster and more convenient way to transact online. According to Shishir Modi, Co-founder, Niki.ai, “Our goal is to simplify the online ordering experience for the next billion Internet users emerging from India’s tier-2 and tier-3 cities, who are yet to transact online due to complicated interfaces or language barriers. We believe that if one is able to carry out all important payments and bookings through a simple interface, where every service can be availed through conversations—the medium that one is most familiar with—the experience can enable millions of people to do online payments.”

Our goal is to simplify the online ordering experience for the next billion Internet users emerging from India’s tier-2 and tier-3 cities, who are yet to transact online due to complicated interfaces or language barriers 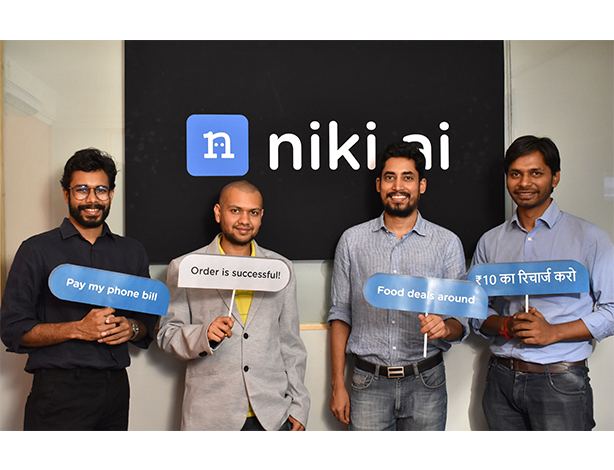 To help every Indian transact online independently, the company has developed Niki, Bharat’s online agent that provides users the ease of a unique conversational interface, as well as 24/7 support, to ensure that they are never stuck during a transaction. Backed with conversational data of over four years, Niki leverages cutting-edge artificial intelligence (AI), machine learning (ML) and natural language processing (NLP) algorithms to enable users to talk to it in their own language, assisting them through every step of the transaction. Modi says, “These algorithms built on deep research enable Niki to understand user instructions and respond accordingly in an extremely personalised manner. Simply put, Niki ‘learns’ about the user so that the recommendations are much more accurate. So, if a user frequently travels on Fridays and by night buses, just a ‘show me some buses to Mumbai’ will get them responses tailored to their needs.”

Further, with the aim of offering multilingual support, the company launched a voice-command feature in Hindi for Niki in 2018. Modi says, “Now, to book a bus ticket, for instance, one can just say or type ‘book a night bus to Mumbai this Friday’ in English or Hindi, and Niki will get back instantly to help choose the best option customised according to the user. This can also be done for other household payments like movie booking, monthly bills, recharges, etc.” The move has resulted in exponential growth of the company, especially in Hindi-speaking states like Bihar, Madhya Pradesh, Punjab and Uttar Pradesh.

Niki.ai currently has more than 4.5 million users, 80 per cent of whom come from tier-2 and tier-3 cities across India. These are people who shop for various products and services, ranging from movie bookings and bus bookings to utility bill payments, mobile recharges and local deals, among others—simply by talking to Niki. As Niki.ai sees rapid adoption in tier-2 and tier-3 cities, Modi expects the number of users to go up to 10 million by the end of FY19. The company operates on a channel-partnership model to generate revenue: it takes orders from customers and passes them on to partners for fulfilment. For every order generated, Niki.ai gets a commission from the partner company. 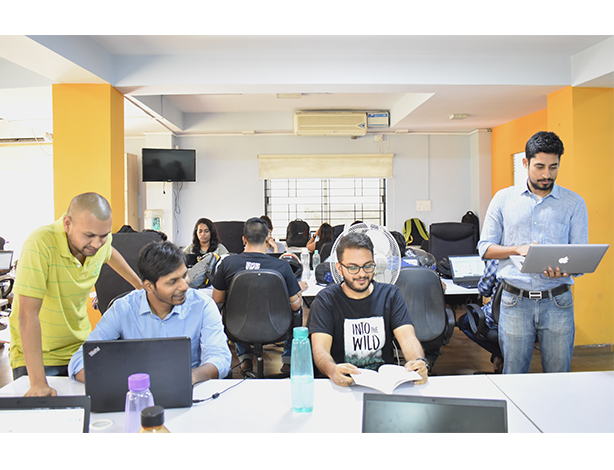 The Niki.ai office in Bengaluru

Modi states with pride that Niki has evolved into a virtual friend that handholds a user through online transactions by being a conversational agent in one’s preferred language. And this is exactly what he and the other co-founders—Sachin Jaiswal, Keshav Prawasi and Nitin Babel—set out to achieve when they started Niki.ai in March 2015. Talking about those initial years, Modi says, “In the early days, our focus was on building AI-powered NLP technology to empower the next billion Internet users with a simple conversational interface for transactions.”

As friends and graduates from IIT Kharagpur, the co-founders of Niki.ai had been working with other companies when they founded their start-up. Modi, on his part, had worked with Energo Engineering, where he had started its renewable energy division, leading to the company’s first solar plant. He moved on to IndiaReads.com, where he served as the head of strategic initiatives, leading new initiatives such as the launch of their e-book platform. Jaiswal had worked with Oracle as product manager and later co-founded Innovaccer, a data analytics company. Prawasi, with his academic background in computer science, had worked with Amazon for four years, building architectures at scale. Babel had worked with Ipsos, increasing the marketing ROI (return-on-investment) for Fortune 500 firms. Modi says, “We all had similar backgrounds and were strong believers in technology’s potential to create transformative solutions.

The belief that India has a huge consumer base that is looking for large-scale solutions and the resolve to build an exemplary product for the next billion Internet users in India were things that we all had in common.”

They all quit their jobs to co-found Niki.ai and moved to Udaipur in Rajasthan, which was Babel’s hometown. Here, they rented a place owned by Babel’s father for three months and hired a few interns to build their minimum viable product (MVP). The company stayed bootstrapped during those months. On launching the private beta version of Niki in June 2015, they moved to Bengaluru and raised seed funding from Ronnie Screwvala’s Unilazer Ventures in August 2015. The public beta version of Niki was launched in November the same year. In May 2016, Ratan Tata, the chairman emeritus of Tata Sons, made an investment in the company. Unilazer Ventures also participated in this round of funding. By this time, Niki.ai had already got its first one lakh users, and then in July, the company launched Niki 2.0 with a better interface, improved user experience (UX) design and stronger messaging features. In early 2017, they rolled out travel services as a new segment, starting off with bus and hotel bookings.

Niki.ai raised Series A round of funding in June 2017. The lead investor was SAP.iO, an AI-focused fund from Silicon Valley. Modi says, “SAP is a global leader in business management software and this was its very first investment in India. SAP’s participation in this round was a strong validation for Niki.ai’s technology and its global potential.” The round also saw participation from Unilazer Ventures and investors like Haresh Chawla (co-founder and former CEO of Network18 and currently a partner of True North) and Arihant Patni (Managing Director, Ideaspring Capital). The boost given by these investments to Niki.ai has been tremendous, and Modi says, “Our seed funding helped us build a fully automated, AI-powered platform. In fact, we are the only conversational commerce platform in Asia to have achieved this kind of scale. Now that our product ‘Niki’ is in place, our Series A funding is being used to propel our hypergrowth phase, where we are extending voice and vernacular support in multiple Indian languages.” 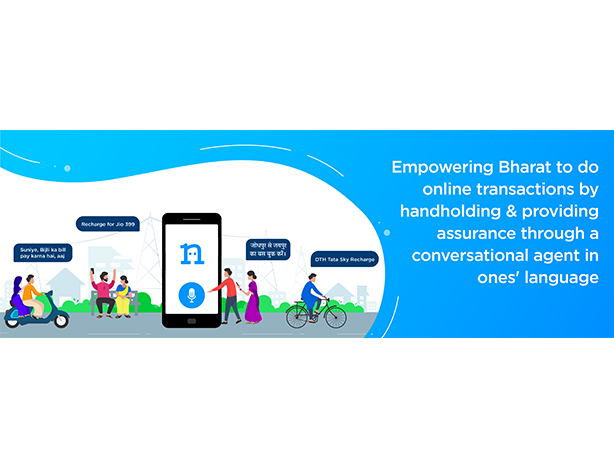 Today, Niki.ai has a team of over 80 employees at its office in Bengaluru. On average, the number of daily transactions varies from 8,000 to 25,000, keeping in mind the variety of transactions users can carry out on Niki. The company reported an 800 per cent year-on-year increase in gross merchandise value (GMV), resulting in revenue growth of 430 per cent in 2017-18. This translated into a 56 per cent month-on-month growth in transactions. Niki.ai turned profitable for all transactions starting October 2018 and registered a `250 crore GMV (annualised) at current run rate, as it launched its much-awaited voice command feature in Hindi.

Asked about future plans, Modi replies that the company is looking to achieve an annualised GMV run rate of `1,800 crore by the end of FY20. For Niki.ai, the scope is massive since the country has the world’s second largest number of Internet users. Modi concludes, “We are already focusing on handholding 450 million Indians who have come online in the last few years to make online payments. As we turn our attention to the next wave of Internet users in India, we will be launching Niki in 9-10 major Indian languages to cover the entire gamut of users.”