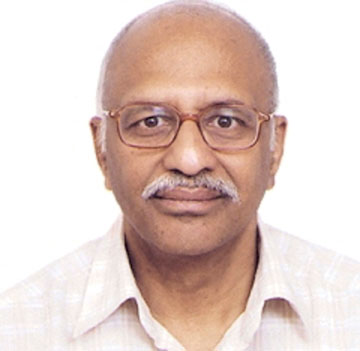 Giving a New Face to Chirawa 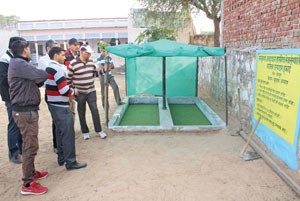 Rainwater harvesting and groundwater management is just the tip of the iceberg when it comes to welfare projects undertaken by Ramkrishna Jaidayal Dalmia Seva Sansthan (RJDSS) in Chirawa, Rajasthan. In conversation with MARWAR, Raghu Hari Dalmia, a trustee of the RJDSS, talks about the institution’s journey to make Chirawa a role model for others. 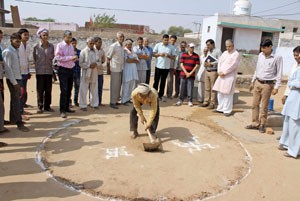 Indian villages rely mostly on monsoon showers that send water percolating through the soil into the water table, which is then tapped throughout the year by villagers. But what happens if scanty or unpredictable rains become a recurring phenomenon?  The chronic droughts that follow often compel villagers to migrate to cities. As for those who stay behind, they feel forced to tap the groundwater faster than nature can replenish it, or walk long distances in search of water.

Some years ago, such was the scenario in Chirawa, a block comprising 88 villages, in the Jhunjhunu district of Rajasthan. Fortunately, the situation has changed for the better in the past 14 years and Chirawa’s dry semi-arid terrain has steadily come back to life, courtesy a path-breaking philanthropic project spearheaded by Ramkrishna Jaidayal Dalmia Seva Sansthan (RJDSS). 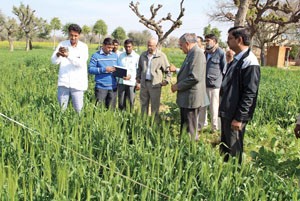 It all began when the famous Ramkrishna-Jaidayal Dalmia family became aware of how water shortage was posing a serious threat to life in Chirawa, their native place. Raghu Hari Dalmia, a member of the family, says, “The villagers told us that the water level in the block was reducing day by day, and the amount of water that remained would only suffice for a maximum of two decades.” Further interactions with the village folk revealed that sustaining on groundwater in Chirawa was not an option, because the area had been declared a ‘dark zone’ (an area with fast depleting groundwater), but also since high levels of fluoride and elevated total dissolved solids (TDS) in the water could pose severe health risks. 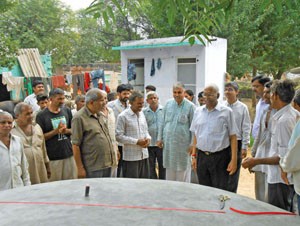 Keen to address the water scarcity issue of what once used to be the home of their forefathers, the Dalmia family decided to set up a non-government, non-political and non-profit organisation. And so the RJDSS was born in 2004, with a small team of three, its principal objective being to facilitate availability of clean water in Chirawa. The organisation started off with rainwater harvesting because it believed that this was the best way to make water available to the villagers for household needs. As a result, special tanks were built that would fill up with water during the monsoon through pipes, bringing succour to villagers with the stock going until the next monsoon. To date, 2,869 rainwater harvesting tanks have been erected in 66 villages of Chirawa, that supply water to 40,000 locals. Raghu Hari Dalmia, a trustee of the RJDSS, states, “These tanks have the capacity to harvest more than six crore litres of rainwater every year.” 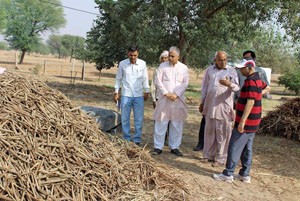 Chirawa is one of the six blocks in Jhunjhunu where borewells are not allowed, because the groundwater level is extremely low. To resolve the groundwater depletion issue, RJDSS next turned its attention to increase the rate of groundwater recharge. It was not an easy task, since the RJDSS had to change the misconceptions that villagers had about groundwater. Raghu Hari Dalmia explains: “They had always thought that groundwater came from a perpetual source.” Nevertheless, the RJDSS has continued with its mission, and so far, five ponds have been built to collect water for use in horticulture and agriculture. Additionally, 46 recharge wells have been constructed for run-off water, which had earlier been creating puddles on village pathways. Raghu Hari Dalmia adds, “Families have also taken to recharging groundwater through soak pits in their houses.” Until now, 2,940 soak pits set up by RJDSS have ensured that grey water from the kitchens and bathrooms of houses flows into the ground. Summing up the impact of their groundwater management initiatives, Raghu Hari Dalmia says, “Every year, approximately 18.50 crore litres of water is recharged by these ponds, recharge wells and soak pits, which takes the total count to 120 crore litres till date.” 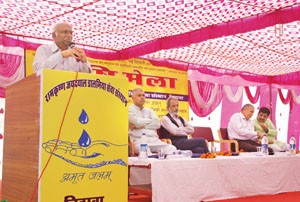 Over the years, RJDSS has expanded its team to 15 workers, while simultaneously widening the scope of its philanthropic work in Chirawa. According to Raghu Hari Dalmia, “Our aim is to promote the overall development of this area and bring khush-haali or ‘prosperity with equity and harmony’ here.” Today, the organisation is actively involved in introducing farmers to scientific and sustainable agriculture practices. Dalmia states, “We teach farmers how to reduce water consumption in agriculture and advise them to sow crops which require less water.” This initiative of RJDSS not only saves 139 crore litres of groundwater every year, but has also boosted agricultural productivity and reduced the cost of inputs for farming, such as fertilisers and electricity for pump irrigation, thereby helping farmers to earn more money. The 1,700 farmers currently associated with the project are also increasing their incomes, which grew 25-35 per cent for the financial year 2017-18, thanks to demonstration of agricultural techniques conducted by the RJDSS. Dalmia says, “We provide them with technical know-how and inputs about recommended varieties of improved seeds and fertilisers for better yield and returns.” 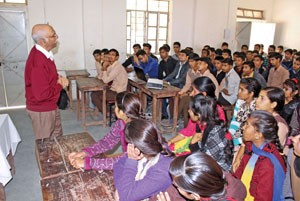 RJDSS has also given a boost to Prime Minister Narendra Modi’s dream of stopping open-defecation by building toilets in Chirawa for those who are unable to afford one. Under its total sanitation campaign, RJDSS has constructed 1,360 toilets in 36 villages of Chirawa—a move which has benefited 9,000 residents. Speaking about the challenges they faced in implementing this project, Raghu Hari Dalmia says, “We first had to convince the villagers, especially the older generation, to use toilets for defecation instead of going in the open.” Nevertheless, RJDSS has managed to wipe out open defecation in 22 villages up to now. As part of its effort to radically improve sanitation in Chirawa, the organisation intends to make all villages open-defecation free in due course of time.

Some of the other initiatives that the RJDSS has undertaken span across categories like tree plantation, forest creation, rearing of livestock, sustainable use of natural resources, women’s empowerment, youth development, and nashamukti (de-addiction). As part of the organisation’s tree plantation and forest creation drives in Chirawa, more than two lakh plants have been planted on community-owned lands and individual farms. Additionally, 202 orchards that grow fruits like kinnow and lemon have been promoted. With help from the RJDSS, 33 women’s self-help groups have also been set up till date to empower women on economic and social fronts. According to Raghu Hari Dalmia, “The 426 members have taken up different avocations by obtaining loans from their respective groups. So far, these groups have managed to save `19.37 lakh and give loans of `44 lakh.” In keeping with Prime Minister Narendra Modi’s Swachh Bharat Abhiyan, RJDSS has also made cleanliness a way of life in four villages of Chirawa by making them free of strewn plastic. 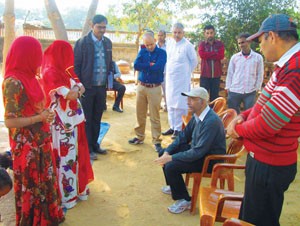 Ramkrishna Jaidayal Dalmia Seva Sansthan’s initiatives make up a remarkable story of the Dalmia family’s efforts to transform Chirawa’s parched landscape into the green haven that it is today. Did they manage it all on their own? Raghu Hari Dalmia replies, “In the last three years, RJDSS has contributed more than R4.5 crore on average towards this noble cause. We have also received aid from the Department of Science & Technology, Government of India, for different projects.” He adds, “Every initiative that the organisation has flagged off so far has been community-based, with the beneficiaries being required to contribute either in terms of money or man-days. The contribution varies between 20 and 50 per cent, depending on the nature of a project.” Asked how RJDSS is looking to improve life in Chirawa in the future, Dalmia reveals, “Till date, our philanthropic initiatives have reached out to 66 villages in Chirawa; we hope to widen our scope to all 88 villages in this block. Keeping this in mind, RJDSS will be spending approximately R30 crore in a span of five years, from the financial year 2019-20.”