Home People Profile From The Grave To The Pinnacle Of Success 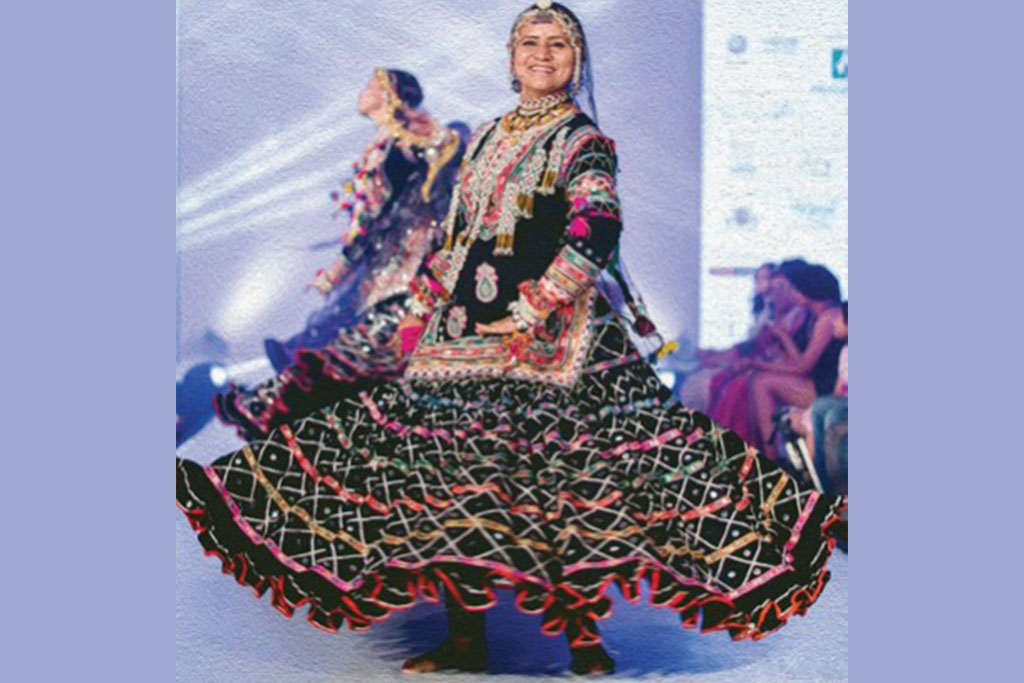 The Kalbelias are a nomadic people of Rajasthan, who traditionally have earned a living as snake charmers. It is to this community that Gulabo Sapera was born in a small village near Ajmer, in 1972. The seventh of eight children and the fourth girl child of the family, Gulabo was to share the sad fate of a centuries’ old Kalbelia tradition of doing away with any girl child who was thought of as an added burden to the family. Buried alive by the women who had helped with the birthing, Gulabo lay in what was meant to be her grave for five hours, until her grieving mother and aunt decided to dig her out in the dead of the night, while the village slept. Miraculously, she was still alive.

Thereafter, Gulabo’s father, fearing that the village folk would try to kill her again, began to take her along to his daily snake charming rounds. “I would spend the whole day from morning to evening with my father. When hungry, the accompanying women would feed me the leftover milk after feeding the snakes,” says Gulabo. “As I grew older and was about two years old, I started playing with the snakes, wrapping them around my neck and dancing with them.” Gulabo continued to go out with her father until she was about 5-6 years old, when community elders started raising objections about her dancing in public, she being a woman, which was against Kalbelia traditions. This, however, didn’t go down well with Gulabo. Dancing with the snakes to the tune of the been (two-reed pipe used by snake charmers) and the dafli (handheld bass producing instrument similar to a drum) had become like an addiction for her, and when taken away from it, she fell so ill that her father had to take her to the Ajmer Dargah, hoping for a miraculous cure. Narrating the incident, Gulabo says that as she lay motionless at the Dargah, a rose petal fell on her chest, and she started moving. This prompted her father to change her name from Dhanwantri (the name she was given at birth) to Gulabo (rose). 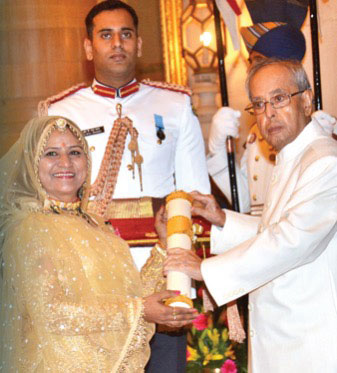 Gulabo Sapera being honoured with the Padma Shri by former President of India, late Pranab Mukherjee

The roadway to success

When she was about 13 years old, during a street performance at the Pushkar Mela, Gulabo was spotted by tourism department officials Tripti Pandey and Himmat Singh. Enthralled by her lithe, supple frame and her sinuous movements, they invited her to perform on the stage that evening. While the performance gave Gulabo her first taste of success with the crowd applauding and cheering her, it also brought censure from community elders for whom performing on a stage was taboo. This forced her father to tender a public apology and vouch to never let his daughter dance again. Tripti Pandey, however, sent for her again, but Gulabo’s father refused. As for Gulabo, she was eager to meet “Pari Behen” (as she called Pandey) and so she sneaked out in the dead of the night with her brother and went to Jaipur, where she performed and “has been performing ever since”.

Before long, the Kalbelia community of Jaipur too began to object to her dancing in public, but luckily for Gulabo, Maharani Gayatri Devi intervened on her behalf, after Gulabo failed to show up for a programme organised by her. Summoning her parents, the maharani said to them that Gulabo was not just their daughter, but also a daughter of Rajasthan and the whole of India and that she should be allowed to dance and make the nation proud, in view of her exceptional talent. Also, as advised by Gayatri Devi, Gulabo made Jaipur her new home, where she continued to perform until she met art curator Rajiv Sethi, with which an opportunity opened up for her to perform in the Festival of India, in Washington DC.

Gulabo remained in the USA for two months, putting up enthralling performances, which led to an offer being made to her to live in the USA and teach dance. Gulabo’s patriotic sentiments, however, wouldn’t allow this, which she conveyed to the then prime minister, Rajiv Gandhi, whom she had the opportunity to meet in the USA. This pleased the prime minister, on whose wrist she then tied a symbolic rakhi and made him her rakhi brother. 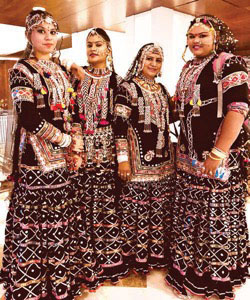 Upon Gulabo’s return from the USA, the Kalbelia community welcomed her with open arms. “The very people who had castigated me and my family once, now proposed that I teach dance to their daughters,” says Gulabo. Narrating the incident, she says that when she then asked them how she could teach their daughters to dance if they kept killing them, they made a promise to never again kill their daughters, and, true enough, Gulabo says they haven’t. Also, pleased with her success and her efforts to promote the Kalbelia dance form (which Gulabo prefers to call ‘Sapera’ dance, given that her movements resemble that of a snake), they even made her the president of the Kalbelia community.

Gulabo has reached the pinnacle of success since then, visiting and performing in 165 countries and winning numerous awards, most of which she is not able to recall. Among the more prominent ones are a gold medal by Queen Elizabeth in 1985; the ‘National Unity Award ‘90’ (for her outstanding services, contributions and achievements) by former President of India, Giani Zail Singh; the ‘Rajasthan Association of North America, NY’ award (for her outstanding performance, dedication and commitment to the community); the ‘Cultural Ambassador Award’ by UNESCO last year; and, of course, the Padma Shri in 2016 by former President of India, Pranab Mukherjee. A book has been written on her too by Thierry Robin and Véronique Guillien in French titled Gulabi Sapera – Danseuse Gitane du Rajasthan. 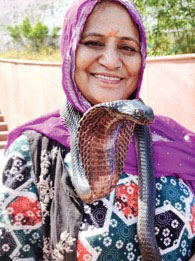 Gulabo Sapera posing with a cobra

Though she has been practising her art for nearly five decades, far from hanging up her dancing shoes, Gulabo continues to promote her Sapera dance and in turn Rajasthan’s folk heritage untiringly. Besides giving online dance lessons to girls worldwide, she has set up the Gulabi Sapera Sangeet Sansthan in Jaipur to facilitate the cultural development of the Kalbelia community. Gulabo’s family is as enthusiastic as she is about her dance, which shows in their active involvement with it. While husband Sohon Nath—a multifaceted artist who can dance, sing and play the harmonium and the dholak—has been supporting her and her work in every possible way, daughters Rakhi, Hema and Roopa have learnt the dance too and are now helping her promote it further. Son Dinesh, popular as Dino Banjara, has his own group, while son Bhawani is an accomplished motorcycle stuntman.

Asked about her future plans, Gulabo says, “I want to promote my art further so that it gains widespread popularity and a Gulabo blossoms in every home to make both the Kalbelia community and the nation proud.” True enough, she has started work on her dream project of establishing a dance school in Pushkar where she intends to train children and help them acquire expertise, in a bid to keep her legacy and the Kalbelia heritage alive.