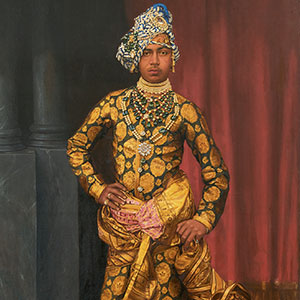 In Rajasthan, in north-west India, it is the forts that attract the visitors most, who come from all around the world. Rising spectacularly above the rocky terrain, these imposing structures were safe havens for its inhabitants, their spiked doors and battle-scarred ramparts bearing witness to having defied many enemy attacks. It was in these forts that for centuries power and a sense of secluded elevation commingled with natural splendour to take them to rare heights of luxury. The Mehrangarh Fort in Jodhpur is a spectacular example, whose corridors and palatial rooms exude resplendence and grandeur with marble and stone carvings, fountains, medieval paintings, murals and stained glass mosaic adorning them. 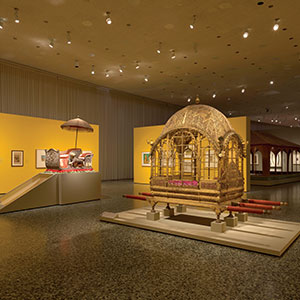 The Mehrangarh Museum Trust of Jodhpur may not ever succeed in transporting the majestic fort to the doorsteps of admirers, but it has done the next best thing: collaborating with the Museum of Fine Arts, Houston, it has jointly organised an exhibition that displays more than 300 rare exhibits in what is one of the largest exhibitions on Indian art in North America. Titled ‘Peacock in the Desert: The Royal Arts of Jodhpur, India’, these exhibits include finely crafted arms and armour, ceremonial tents and canopies, intricately carved furnishings, sumptuous jewels, precious paintings and luxurious textiles from the Marwar-Jodhpur kingdom of Rajasthan, drawn primarily from the huge ancestral collections of the Rathores—the royal family of Jodhpur—that are housed within the city’s Mehrangarh Fort and Umaid Bhawan Palace. 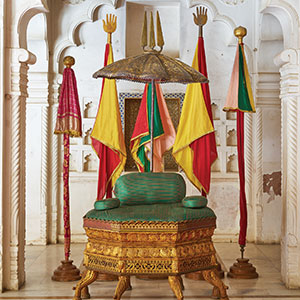 Curated by Karni Jasol, director of the Mehrangarh Museum, they trace the kingdom’s rich artistic tradition from the foundation of Mehrangarh Fort in 1459 to India’s independence in 1947.

It is the first time most of these treasures of almost unbelievable refinement have left Jodhpur. The rest of the exhibits are carefully selected objects borrowed from other notable collections.

A story about a single ruling clan 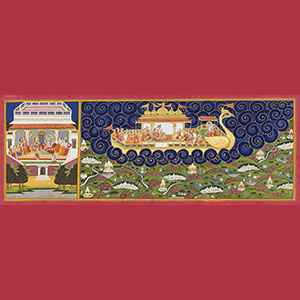 The exhibition illuminates the riches of the maharajas and maharanis belonging to the Rathore dynasty, exploring in depth the patronage of a single royal Indian clan from a desert landscape for the first time. According to Karni Jasol, the exhibits on display give a rare peek into how the Rathores acquired and commissioned objects in the midst of cross-cultural exchanges to leverage conquest, diplomacy, matrimonial alliances, patronage and trade. 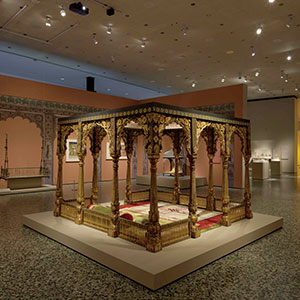 Jodhpur was established as the walled capital city of the desert kingdom of Marwar by the 15th century, with the imposing Mehrangarh Fort at its heart. Its founders were the Rathores, a Hindu clan that had migrated from their homeland further north to the desert tracts of western India two centuries ago, in the wake of invading armies. The city owed its growing prosperity to the Rathores’ control over profitable trade routes. However, this did not go unnoticed by two expansionist empires who eventually ruled India: First the Mughals, who exerted variable degrees of control from the early 16th to the mid-19th centuries, and then the British, who ruled from 1858 to 1947.

An era of cultural exchange begins 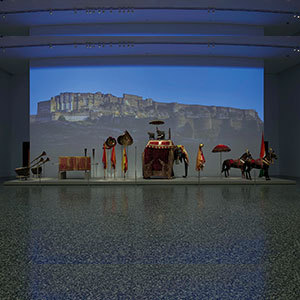 But how did these encounters impact the cultural landscape of Jodhpur, moulding everything from architecture and artistic pursuits to language, religion and warfare? Both periods not only increased the interaction of the Rathores with the outside world but also introduced architectural styles, artisanal traditions, languages, objects, and systems of administration from faraway lands to this desert kingdom. Cultural exchanges also occurred through military victories and defeats, strategic marriages and exchange of gifts. 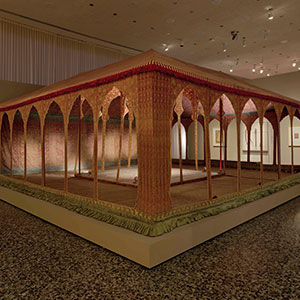 ‘Peacock in the Desert: The Royal Arts of Jodhpur, India’ is on view at the Museum of Fine Arts, Houston, from March 4 through August 19, 2018. After Houston, it will travel to the Seattle Art Museum and later to the Royal Ontario Museum, Toronto.