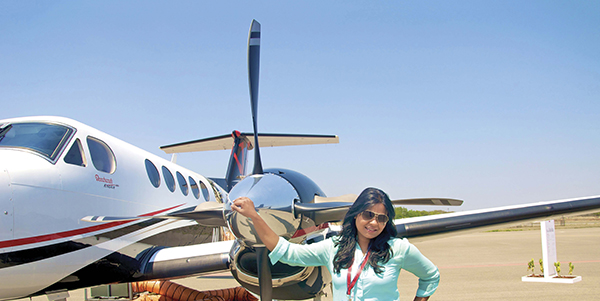 LL KANIKA TEKRIWAL HAD, TILL ABOUT FOUR-AND-A-HALF years ago, was an idea, a few thousand rupees in her bank and a bunch of sceptics discouraging her. But she’d tell anyone who doubted her that she would be on the cover of Forbes magazine in five years. With JetSetGo, India’s first online marketplace for private jets, she accomplished just that, and much more. In the past year or so, the young entrepreneur has been featured twice in the Forbes 30 under 30 Asia list, has found a place on BBC’s list of 100 most inspirational women in the world and has even made it to CNN’s 20 under 40 list, besides winning the National Entrepreneurship Award for 2016. 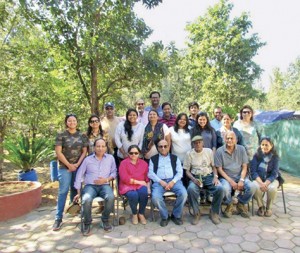 Looking back on her journey so far, Tekriwal says, “It’s been nothing short of overwhelming. We’ve gone from one flight a day to a JetSetGo plane in the sky every minute of the day. If I had to relive every moment of the past four years, there is absolutely nothing I would change. These years have taught me that if you believe in yourself and your ideas, absolutely no force in the world can stop you from achieving what you want.”

At the start
A Bhopal native, Tekriwal belongs to a typical Marwari family. Till a few years ago, theirs was a big joint family with industrial interests. Today, her father, Anil Tekriwal, runs various businesses with interests in chemicals and real estate, among others. Her mother, Sunita Tekriwal, is a housewife. Her younger brother, Kanishk Tekriwal, who Kanika Tekriwal proudly calls “the smartest out of the lot”, has established a construction business with friends. It is based out of New York.

Tekriwal got a boarding school education. She then pursued an MBA in finance from Coventry University, London. She says, “I never really attended college, much to my parents’ horror. I skipped 99 per cent of my lectures and spent that time at work understanding aviation. I remember taking tuitions in econometrics in my office to ensure I maintained straight As.” However, life decided to throw a curveball. Kanika was 22 when she was diagnosed with Hodgkin lymphoma. She fought her way back to health, pursuing her dreams with single-minded determination. 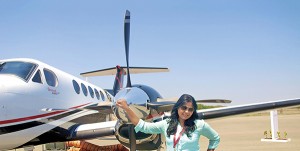 An idea is born
Tekriwal had recognised the potential in the aviation sector early on. She had been associated with the private aviation industry since she was 17. She had worked abroad, seen the sector evolve and learnt a thing or two about the industry. She had even witnessed the darker and the more difficult side of the general aviation business in India along the way.

In India, issues included customer frustration while dealing with charter brokers who provided limited choice and exploited price arbitrage opportunities; inefficient pricing models forcibly used by operators due to inadequate demand aggregation options; inadequate or sub-standard level of ground infrastructure and quality of service; weak supply chain for services and parts, especially for legacy aircraft owners; cumbersome trip planning and approval processes of various government departments and other bodies; and increasing aircraft ownership costs. “While some of these issues are prevalent in most markets, they exist in combination here. So, it doesn’t take long to understand why the general aviation industry in India is still underdeveloped and why general aviation movements account for just about 15 per cent of total movements in the country,” she says.

JetSetGo was conceptualised to change this. The plane and helicopter chartering operation was launched with the aim to make private flying in India more transparent, economical and efficient. Today, the company reportedly operates India’s largest private jet fleet, which includes Falcons, Hawkers and even Challengers. In a span of three years, the company has witnessed 7x growth in revenue and is adding 1.5 planes and four new people on average to the team every month. Cricketer Yuvraj Singh and businessman Puneet Dalmia are investors, and clients range from business executives and politicians to families heading on vacation.

Tekriwal says, “Flying in a private jet is typically perceived to be uber-luxurious or a service that is available only to the rich or the ultra-rich. Think harder, and one will be able to grasp how this form of travel enhances agility and efficiency for corporates in an ever-complex world. Also, not many appreciate the important role it plays in connecting locations that are still not served by commercial airlines for economic reasons or otherwise.” 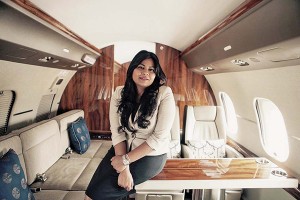 The long road
The journey was not one without challenges. When JetSetGo commenced operations, just executing one flight a month seemed complicated and the team would fret over making it perfect. Now, there are days when they don’t know how many flights have been executed. Things that used to be huge problems are now processes. However, minor issues remain. There are times when airports don’t give the company the slots they want, non-availability of fuel can ruin a perfectly planned trip or a plane could return to base due to bad weather after having been dispatched 20 minutes earlier with a happy family excited about their vacation.

Tekriwal says, “When I look back, I think we’ve had minor hiccups but nothing I would call worthy of a challenge. There have been days when I have not wanted to wake up in the morning simply because of the number of issues that await my attention and have gone back to sleep that night with double the problems. There have also been those odd days when I have just wanted to give up everything and go live on an island. But when I look back, I can only laugh at those instances and see how we sailed through, overcoming every hurdle.”

Starting young
JetSetGo has exhibited an unprecedented year-on-year growth. Today, the company has teams across the country and connects every possible airstrip across the nation. They also service the international sector. As of now, JetSetGo controls a little over 12 per cent market share of the private aviation industry. The plan is to take that number up to 40 per cent by the end of this financial year.

What makes these achievements more commendable is Tekriwal’s age. She is not even 30 yet. However, the entrepreneur says she has learnt early on that age is really just a number. She states, “There is no right or wrong age for anything in life. When I started JetSetGo, most people thought it would be a passing phase since they believed I was too young to be serious about it. At the same time, a lot of people supported me, perhaps because I was young and they wanted to help me turn my dreams into reality.”

Starting JetSetGo at that age, however, had its advantages. It allowed the entrepreneur to make mistakes, learn from them, seek support from elders, have the bandwidth to do absolutely anything she wanted to and most importantly, to take risks. But the goalposts are still some distance away. She says, “I am not sure if we’ve reached where we would like to be. We are still closer to the bottom of the hill with a lot to achieve. We are blessed to have come the little way we have and I feel absolutely nothing short of privileged.”

Among Tekriwal’s treasured memories, so far, are the signing of her first contract with a customer, receiving a message at 2am that a patient she had flown in on an air ambulance was now fighting fit and the owner of one of the country’s largest corporate houses telling her that she is his clone and will revolutionise the industry. The most remarkable one, however, was when the team upgraded a customer from a small six-seater aircraft to a large plane with a bedroom, shower and the works as a surprise. The customer called Tekriwal upon landing and said, “Kanika, you’ve changed my life!” That moment on, the team endeavoured to give more than what is promised and go out of the way and do small things that make someone’s day, be it a customer or a team member.

Now trending
In the past few years, what’s largely changed in the private aviation industry in India is that private jets and helicopters are no longer looked at as a luxury, but as an enabling tool. Industrialists are today open to their senior management using this form of travel to cover four cities in one day or visit three plants in remote areas of the country and come back in time to attend a board meeting. People in Tier-2 and Tier-3 cities are also open to using the services more than ever before. Also, the country as a whole has moved from being materialistic hoarders to “experiencers”. A considerable portion of the population now spends a significant amount of their disposable income on experiencing new things, travelling to alternative destinations and going down the path less taken—this has had an obvious impact on the private aviation industry. The coming years will only see exponential growth. India is a nation connected by 300 or more airstrips (both remote and controlled). “Only about 85 are being serviced by commercial airlines. As businesses grow, travel to odd destinations will only increase. I see helicopters replacing cars, private jets becoming the new norm, people ditching safe, small planes for grander and better aircrafts. I see more private jets than ever before on Indian tarmacs,” says Tekriwal.

Personal touch
The entrepreneur attributes her business acumen to
being a Marwari. She says, “To a non-Marwari, operational autonomy and financial discipline might seem like an oxymoron, but few know this art as well as a Marwari. Another quality I believe in is frugality. We have historically demonstrated an enormous appetite for adaptability as well as spotting opportunities. I don’t know if we inherit these traits or learn them from our families while we are growing up, but they play a large part in shaping the face of our businesses.” The self-confessed workaholic likes to paint and read in her rare free time. However, the lack of free time does not bother her. She says, “If I could turn a 24-hour day into a 26-hour day, I would spend all that time only on JetSetGo.”

Tekriwal’s vision for the company is to be the air travel partner of choice that enables the most personalised travel with fastest mobility from any point A to point B on the planet. So what can one expect from her in the next 5-10 years? “World domination,” she says.

POINTERS ON BUILDING A BUSINESS