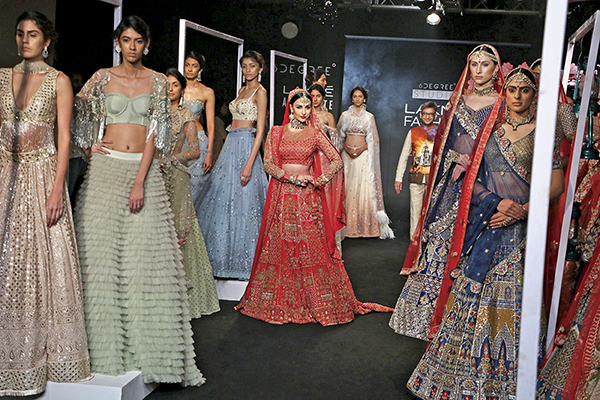 Lakmé Fashion Week A/W 2017 saw some great collections from Marwari designers, who beautifully combined tradition with impeccable style. MARWAR spoke to three of them about the growing popularity of fashion wear among Marwaris and also about wedding wear trends this season. 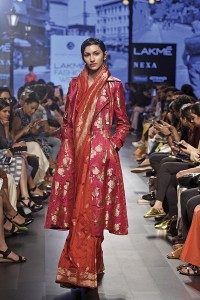 There was a time when Marwaris seldom, if ever, ventured into the business of designing clothes. The last couple of decades, however, have seen a sea change, and today not only is the community witnessing an explosion of designers and designer wear, but the fairer sex has joined in too—and in fair numbers. The glamour quotient of designer wear has given the business of designing a further leg up, explaining the huge popularity of haute couture and fashion shows.

Among the plethora of fashion shows, the Lakmé Fashion Week stands out as a more popular and better known one, which over the years has evolved into a grand celebration of glamour and fashion. As one of the biggest platforms for the fashion industry, it witnesses a steady stream of established and promising designers showcasing their creations every year, including an increasing number of Marwari designers. Lakmé Fashion Week A/W ’17, for example, saw Marwari designers Sailesh Singhania, Neha Agarwal and Manoj Agarrwal flaunt their creations, among others. The three designers spoke to us about the popularity of fashion wear among Marwaris and wedding wear trends, during a recent interaction. 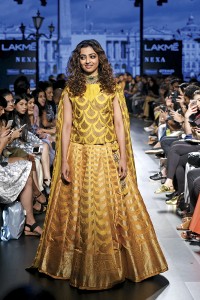 Hyderabad-based designer Neha Agarwal, who has showcased her creations a couple of times earlier at the Lakmé Fashion Week, was there to showcase her evening wear collection themed ‘Mithila in Soho’, which stood out for its hand-embroidered Madhubani Art motifs. The collection, according to the designer, was aimed at popularising the splendour of traditional Madhubani Art among fashion forward women of 2018. Each garment of the collection was hand embroidered, depicting the kitschiest motifs of Madhubani Art, marrying Indian art to modern sporty silhouettes. Colours ranged from indigo, ochre and terra-cotta to warmer tones like chestnut, burgundy and vermillion, with details such as ribs in collars, panels and plackets.

Asked about fashion trends, the versatile designer, who has studied designing at NIFT, Hyderabad, said, “I see lot of knitwear coming in 2017, and I am currently working on knitwear which has a lot of Indian aesthetic and modern wear and a lot of fusion. Bell bottoms, corset tops and sarees are also coming back.”

And what about wedding wear, this being the wedding season? “Weddings have always been grand in India and will be,” she said. “Even now fashion is inspired by Muslim culture and lots of fusion of cultures. Classic silhouette shararas and gowns should definitely be included in your shopping list. Also, I believe in pastel colours.”

The timeless appeal of handloom 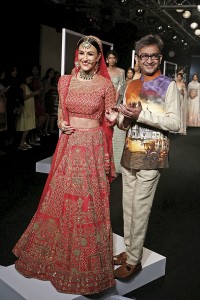 Designer Sailesh Singhania, who is passionate about handlooms, showcased ‘The Winter Rose’ collection at the Lakmé Fashion Week, which had a distinct Western interpretation of the saree, reflecting the glamour and opulence of Indian princesses travelling to the West. Worn to acclimatise to the colder, windy climes of London and Paris, the collection comprised Western silhouettes with long overcoats, trench coats and pea coats with high collars. The collection pushed the boundaries of perception of hand-woven textiles by infusing playfulness, while retaining the highest quality of craftsmanship.

For Singhania, who also is from Hyderabad, the fashion trends for 2017 included sarees with contemporary blouses such as cold shoulder and organza blouses, while in colder cities like Delhi, brocade jackets were being paired with sarees and lehengas for winter weddings. The designer’s passion for handloom sarees shows when he says, “Handloom sarees have taken over this wedding season and they should definitely be included in your shopping list. Gone are those days when blingy sarees were preferred to make a statement. Nowadays handloom sarees are considered very classy and can be worn at grand wedding celebrations. They are timeless in their appeal and can be worn by women of different generations.” 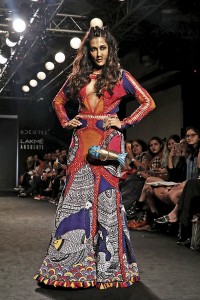 Kolkata designer Manoj Agarrwal’s ‘Jodhaa’ collection was likewise rooted in tradition. Inspired by two mighty dynasties, the Mughals and the Rajputs, every ensemble in the collection was a fluent amalgamation and integration of influences from each other—the Mughals’ appreciation for the finer things of life and the Rajputs’ love for beauty, elegance and fine detailing. The result was beautiful Rajasthani weaves in warm tones of saffron, emerald, copper, brown and henna red, with a red veil epitomising each ensemble.

A self-made designer who has designed for Bollywood stars, Agarrwal feels this century is inspired by the vintage era, and this year is for everything raw. “Not just the fashion industry, but presentations in most industries have gone back to raw, for example—even the food industry,” he says. “It’s a time where people are looking for new concepts, keeping the traditions alive at the same time.”

As for his take on the wedding season, he prefers to dress his brides and grooms in new modern earthy colours like Persian blues and evening husks, adorning them with traditional coloured embroideries. 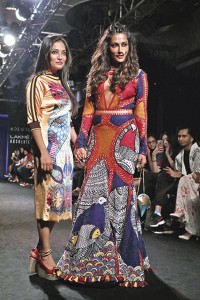 Asked about Marwaris’ growing love for fashion, all the three designers felt that designer clothes, especially traditional wear, have always been popular among Marwaris. Neha Agarwal, for instance, says, “I think fashion and Marwaris go hand in hand. They have an amazing eye for detail, colour, silhouette and great embroidery, and they have always invested in high-end and quality garments.” 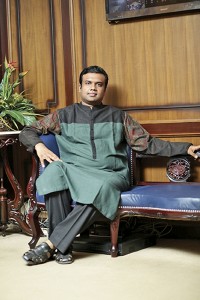 Reflecting similar views, Sailesh Singhania says, “Marwaris are the bon vivants of Indian society and their flamboyant flair for style is visible not only in the garments they wear but also in their jewellery, their parties, homes and accessories. We have a growing fan following among Marwaris who treasure our collection of heirloom sarees in vibrant hues of mulberry silk.” 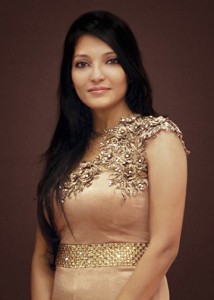 Designers Neha Agarwal, Sailesh Singhania and Manoj Agarrwal are just a representative slice of the world of Marwari couturiers. As more and more Marwaris’ opt for designer wear for weddings and other special occasions, the number of Marwari designers is likely to rise in the years to come; and the Lakmé Fashion Week and other popular shows point towards this trend.