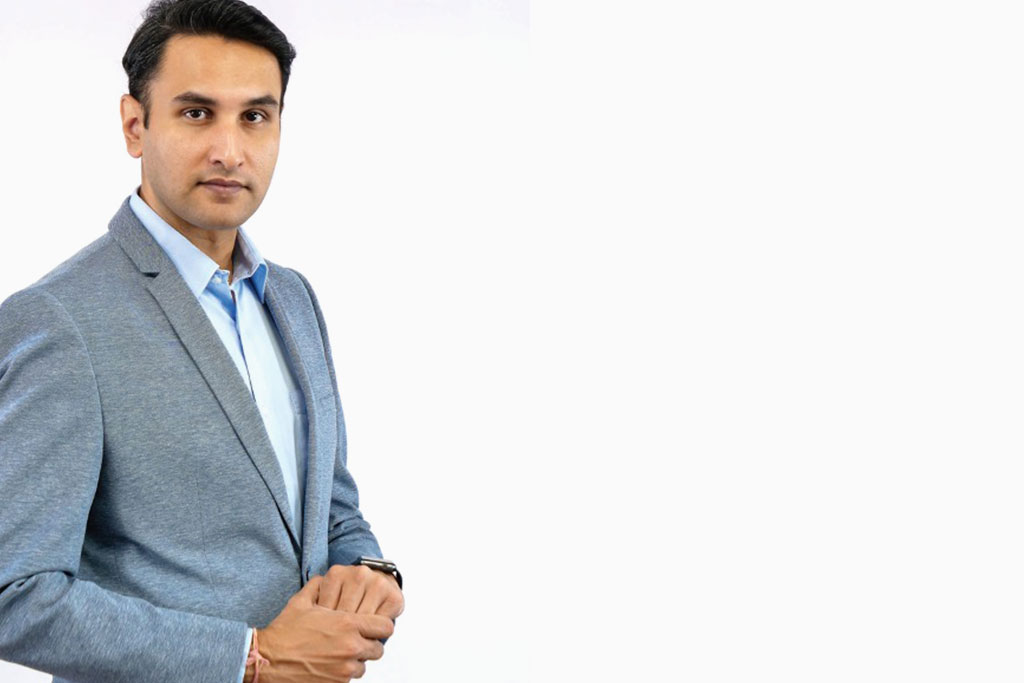 We live in a time when online learning has become the new normal for students. The online education market in India was already growing before the Covid-19 pandemic, but after the lockdown, there has been a dramatic surge in the demand for online learning. Today, online classes have taken centre stage in academia with students studying from home. And even though academic institutions and offline tuitions are gradually opening with a gradual easing of the pandemic, online learning will likely continue to form a critical component of learning. And with that, the future of edtech start-ups like Vedantu looks brighter than ever.

Vedantu was founded in Bengaluru in 2014 by friends Pulkit Jain, Vamsi Krishna, Anand Prakash and Saurabh Saxena. It offers one-to-one and one-to-many online tutoring to students from kindergarten to Class 12 — across the CBSE, ICSE and various state boards — and also to students preparing for competitive exams such as IIT JEE Main and Advanced, NEET and NDA. Apart from live, interactive classes, Vedantu provides previous year’s papers, mock tests, sample question papers and revision notes to prepare these students. It has even launched Super Coders (coding classes) and phonics-based reading classes. 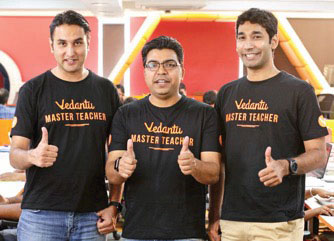 A love for teaching

Pulkit Jain, Vamsi Krishna, Anand Prakash and Saurabh Saxena have tutored over 10,000 students to date. Surprisingly, they had not set out to be teachers when they graduated from IIT in 2005—Pulkit Jain, Anand Prakash and Saurabh Saxena from IIT Roorkee and Vamsi Krishna from IIT Bombay. Instead, they had taken up well-paying jobs and had gone their separate ways. However, within a few months, they found themselves disillusioned. Little did they know that their life was to take a different turn the same year!

The wheels of change were set in motion when they were vacationing in Barnala, Punjab. Saurabh Saxena and Anand Prakash were working in a chemical factory there, and Pulkit Jain and Vamsi Krishna had gone to meet them for a leisurely get-together. During their visit, they visited a local Kendriya Vidyalaya, where the children of the factory workers studied. Reminiscing, Jain says, “The principal allowed us to talk to the students. As 22-yearolds, all we could talk about to the students was that it did not matter that they were studying in a small city—they just needed to dream big and work hard towards making their dreams come true.” They went on to explain to them that in college they had seen students from smaller places who had gone on to do very well in life; and so, could they! The next day, Anand Prakash said he did not want to continue with his job and instead wanted to teach children. The other three also realised that they felt similarly, and over the next few days, all of them quit their jobs and moved to Patiala in Punjab and took up teaching. Wanting to make quality education more accessible in smaller cities, in 2006, they started their first venture in Patiala—a test-prep company called Lakshya to help students prepare for medical and engineering entrance examinations.

Enrolling students was not easy though. Initially, when they would visit schools to address students about competitive examinations and counsel them, the school staff would regard them as just youngsters who were claiming to change the lives of the students. Moreover, as none of them hailed from Patiala, even the parents of students found it difficult to trust them. Nevertheless, they managed to overcome these impediments and Lakshya started its journey with a batch of 35 students. Success greeted them when 11 of these students cleared the IIT entrance exams. Jain adds with pride, “By 2009, because of Lakshya, a small, sleepy city like Patiala, which had no trend of students clearing exams like IIT-JEE and AIIMS, was coming up with 90-100 selections per year.” 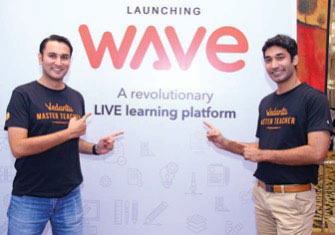 Pulkit Jain (left) and Vamsi Krishna at the launch of WAVE, a revolutionary live learning platform from Vedantu

Thereon, Lakshya expanded its operations by setting up learning centres in Bathinda, Chandigarh and Panchkula too. It became one of the leading tutorials for IIT and medical entrance examinations’ in North India, with its team of about 200 catering to more than 3,000 students every year.

Motivated by the success, Jain says that he and the others now desired to reach out to students across the country, even though they realised that with an offline coaching model, they would not be able to reach out to every town and village. Switching to online seemed like the only plausible solution, and thus in 2012, Jain moved to Bengaluru to understand and build the technology required for such a product. “Some of my juniors from IIT Roorkee came to work with me on the technology. I got to connect with other entrepreneurs around me too, and even got help from some of my seniors who had built big companies,” he says. The same year, they sold a 51 per cent stake in Lakshya to MT Educare, a tutoring and test preparation firm in Mumbai. MT Educare later acquired Lakshya.

Jain explains that initially, they built a B2B platform in Bengaluru, where the technology was used by institutions, schools, universities, educational publishers and teachers to launch their apps, thus creating a marketplace for their courses for students. But though the platform was doing well, it was not fulfilling their aim of bridging the education gap. Therefore, in 2014, they began working on the technology to create an all-inclusive platform that could reach out to a larger audience. And thus, Vedantu was born.
Today, Vedantu caters to students in even the remotest locations. Its tech-enabled platform has helped it to offer its subscription facility at a price more affordable than typical offline coaching. Vedantu has more than 1,000 tutors on board, who teach students in a real-time, virtual learning environment. The live, interactive classes employ two-way audio, video and whiteboarding tools to help students and teachers communicate with each other.

To measure the effectiveness of a class and the attentiveness of students, Vedantu has built a patented evaluation system called WAVE that uses more than 70 parameters. It has also introduced a child safety policy recently, and its internal team now constantly monitors and controls texts, pictures and recordings so that students can experience safe, live online learning. 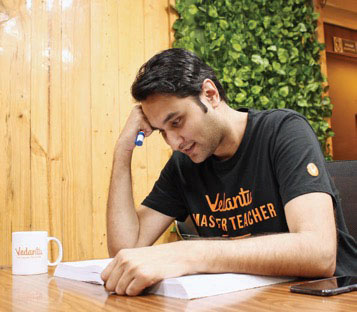 Pulkit Jain preparing before taking a class at Vedantu

Vedantu has recorded massive growth during the lockdown, as students flocked to online classes like never before. To help students learn from the safety of their homes, Vedantu even provided them with free access to its platform. In the process, it saw an increase of 330 per cent in its user base, compared to the pre-Covid growth rate of 25-30 per cent. Consequently, there was a 36x growth in the number of users signing up for its free classes and courses and even the number of paid users grew exponentially to about 2.7
million.

As of today, Vedantu is steadfastly working towards achieving its goal of becoming the topmost player in its sector. It also plans to go global in the next five years. With its dedicated focus on technology and keeping student interaction and engagement at its core, it is not unlikely for Vedantu to drive growth for years to come.