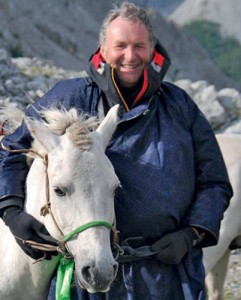 The arms and armour of ancient India were more than just objects of offence or defence: they were symbols of power, of heritage and of a royal upbringing. Dr Robert Elgood brings alive the Jaipur Royal Palace in his coffee-table book Arms & Armour at the Jaipur Court, which showcases a diverse range of weaponry and armour from bygone eras. It features 186 selected arms ranging from swords, rifles, and bow and arrows to helmets, handguns and daggers.

The collection begins with exquisitely crafted daggers in a variety of designs from the 16th to the 19th century. While metal hilts are common for daggers, crystal rock, nephrite, ivory and jade have also been used. Some have unique hilts such as a woman carved in ivory, a horse-head pommel, a flower in bloom, or a ram-head pommel with rubies for eyes. The horse-head pummel dagger is one of the earliest representations of Mughal art—even Aurangzeb owned one. 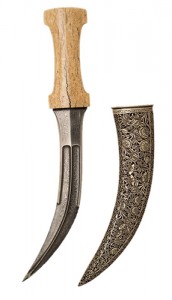 The katar or katara—a type of push dagger—was quite famous with the upper-class Mughals and Rajputs, for whom it was also a status symbol. Gold was commonly used and the kataras often had designs and inscriptions carved on them. The book also features exquisitely designed swords from the Jaipur Royal Court. The collection contains blades from Italy, Germany, Persia and even a tribal blade from Assam. One particular sword from the 19th century contains the following Persian inscription on the face of the blade: “This drop in one hundred unique pearls [.] This blade in one hundred excellent wisdom.” 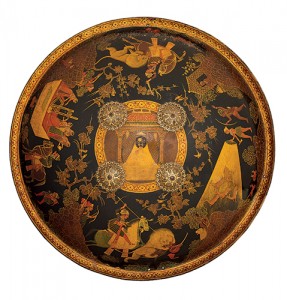 A shield was like an extension of a Rajput warrior’s body, protecting him from the enemy’s deadly strikes. The shields of the royal court were made of leather or steel and carried floral or animal designs, paintings depicting different scenarios or even Japanese and Chinese artwork. The armour featured in this book include a few helmets, arm guards and cuirasses, all with inscriptions and carvings on them—a symbol of high-rank and royalty. The then Dutch East India Company would order lacquered shields from Japan and send shields from India to be lacquered there.

When it comes to axes, India has had several variations of it—domestic, tribal and war. There is the knife axe, with a blade that is a continuation of the haft, and the ankus, which was used to control war elephants and repel evil spirits. 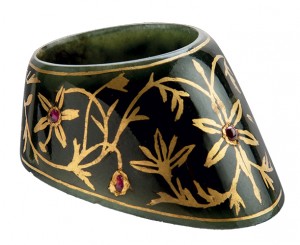 Walrus ivory was used for centuries to make archers’ rings, as it was valued for its beauty and also believed to have had magical powers to detect poison. Elgood’s book is not only valuable to scholars and collectors but also to those who are interested in learning more about India’s heritage. Every arm or armament in this book has a tale to tell of a bygone era.

The Legend that was Gujarmal Modi