Home People Back to the Roots 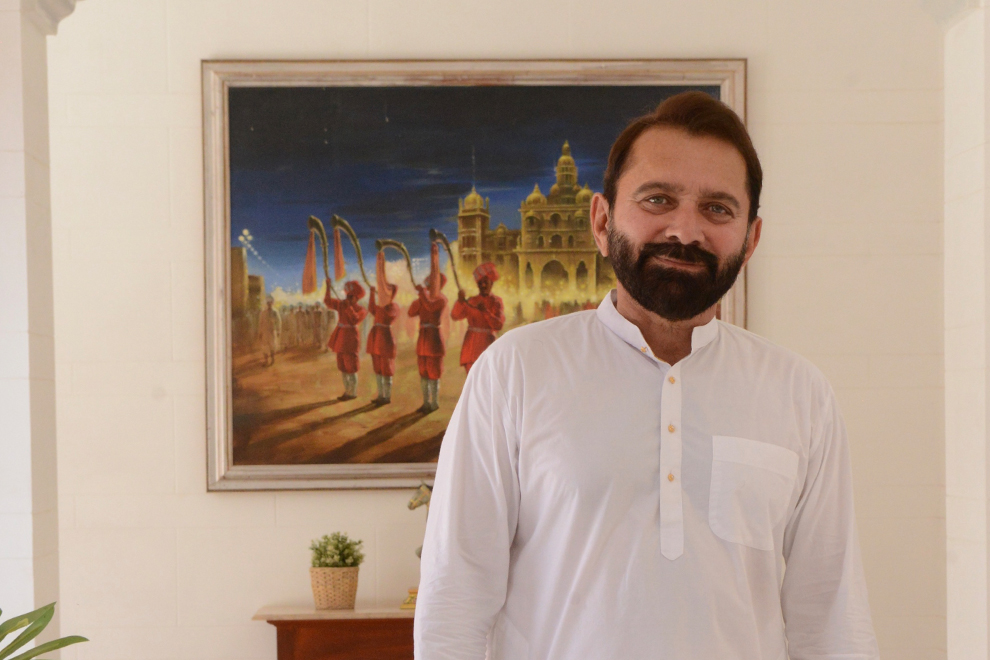 The havelis of Rajasthan stand out for their grandeur, artistry and opulence, which lend to them an aura of timelessness that attracts tourists, historians and sightseers in droves year after year. A true measure of their irresistible charm is perhaps afforded by entrepreneur Sunil Rampuria, who chose to forsake the many attractions of a big, bustling city like Calcutta (now Kolkata) and return to his ancestral haveli in Bikaner, the Bhanwar Niwas, which despite the ravages of time stands defiant, stately and beautiful. 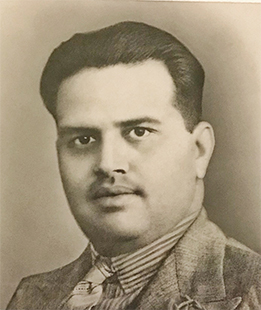 A homecoming
One of a cluster of nine havelis known as Rampuria havelis, Bhanwar Niwas, now a heritage hotel, dates back to the days of Sunil Rampuria’s great great grandfather Bahadurmullji Rampuria, a textile baron who made his fortune in Calcutta. The courtyard and the rooms around Bhanwar Niwas, however, were built by Sunil Rampuria’s grandfather Bhanwarlalji Rampuria in 1927. Built of rose coloured Dulmera sandstone with intricate carvings, its architecture is a fascinating mix of Rajasthani and European styles. The marble used for the grand staircase and the verandahs came from Italy, while the furniture was made by local carpenters to designs by C Lazarus & Co from Calcutta. “Bhanwar Niwas is definitely the grandest and the most magnificent of the Rampuria havelis, and together with the other Rampuria havelis is one of the main tourist attractions of Bikaner,” says Sunil Rampuria, its current owner. 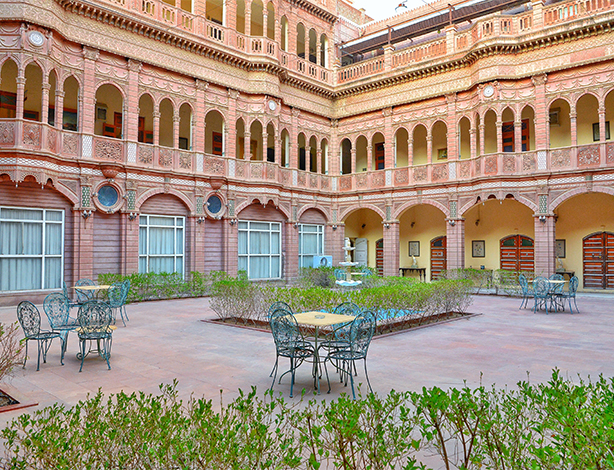 But why did he choose to leave behind the businesses that the Rampurias still own in Kolkata and develop an antiquated haveli. “I was always very interested in art and architecture so I chose the construction business and started work in Visakhapatnam in 1983. But then, at the end of 1991, I suddenly got this idea of converting my ancestral home in Bikaner into a hotel—because of its fun too for Rampuria, passionate that he was about the project. And so, in just about a year-and-a-half, in October 1993, Bhanwar Niwas was ready to open its doors to the public. It is 25 years now that the heritage hotel has been attracting customers from around the world and from all walks of life, including ambassadors, governors, ministers, film stars and, of course, tourists. It consists of three floors that have a total area of about 30,000 sq ft, not counting the courtyard and an adjoining building belonging to Sunil Rampuria’s uncle’s family, which now also is a part of the hotel. There are about 25 guest rooms spread across the ground and first floors, the second floor being the residence of Rampuria’s son Prashant and his family. But apart from being a hotel, Bhanwar Niwas also is a protected monument now and continues to remain a tourist attraction, with almost every traveller to Bikaner visiting it. There, however, are no entry charges and everyone is welcome. 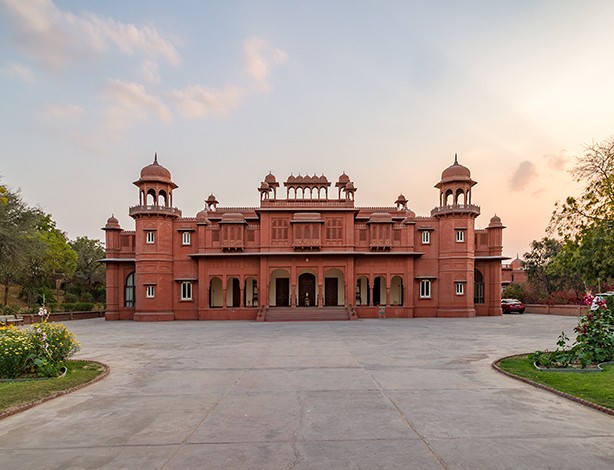 A few years on after Bhanwar Niwas became operational, Sunil Rampuria felt the need to expand, and with that Gaj Kesri, his second hotel was conceptualised. “Bhanwar Niwas was too small and really offered no scope for expansion. With tourism on the increase, having another hotel made sense,” says Rampuria. Land was accordingly bought in the outskirts of Bikaner and soon the amateur architect in Rampuria was at the drawing board, armed with pencil, eraser, ruler and graph sheet. 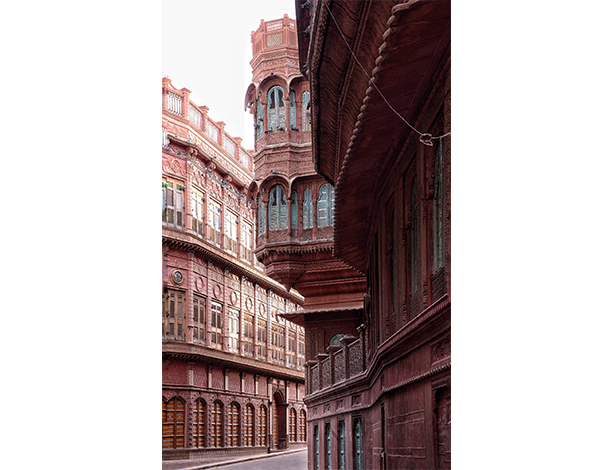 The Rampuria havelis in Bikaner 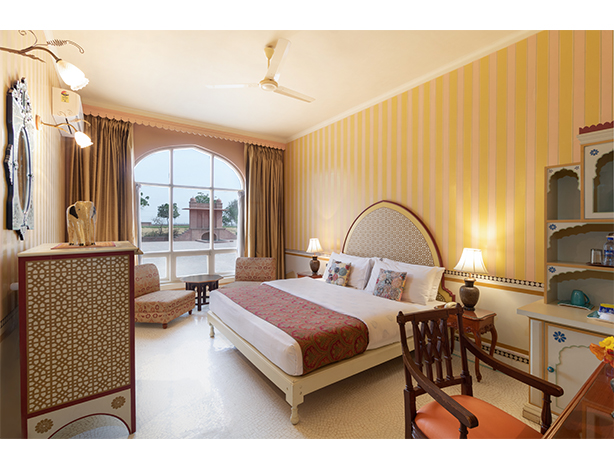 Gradually, what was once a forbidding, sandy stretch of land, with the sun beating down mercilessly on it, slowly began to see transformation into an oasis of greenery with thousands of neem, khejri, taali (sheesham) and other trees being planted and nurtured. Considering Rampuria’s hands-on involvement with the project, his excitement and fervour knew no bounds. “As pillar after pillar and arch after arch was put in place, I would watch in amazement my dreams turning into reality,” he says. Rampuria, however, attributes it all to Maa Karni’s blessings and the love and support of his family.

Art patron and philanthropist
On January 25, 2006 Gaj Kesri was declared open by Rampuria’s parents, in the presence of Rajmata Sa Sushila Kumariji of Bikaner and Samvit Somgiriji Maharaj of Shivbari and other family members and friends. Built in the style of a typical Bikaneri palace, the hotel, like Bhanwar Niwas, has a rich collection of Usta art, the glorious art of Bikaner.Usta art is a kind of lacquer work, where embossing is done by the application of a preparation comprising clay and other ingredients, by means of a brush, which gives rise to lovely patterns and motifs, in bright colours. Enchanted by the art form some 35 years ago, during a chance encounter with an extremely gifted Usta artist, Rampuria’s love affair with the art form began and he started to patronise it. It started finding its way into Rampuria’s hotels and slowly and steadily the collection grew, and today it occupies the pride of place in Bhanwar Niwas and Gaj Kesri, giving the hotels their museum like look. “Usta art still has the power to amaze me and hold me in its thrall, and we have in our own small way been responsible for keeping this wonderful art form alive,” says Rampuria. 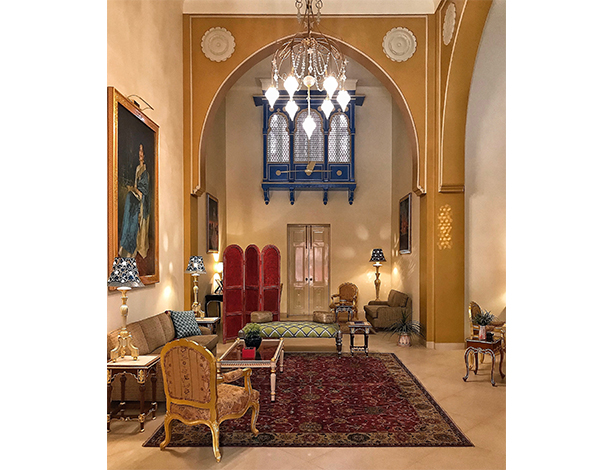 Sunil Rampuria’s sphere of interests also extends to philanthropy. An educationist, he runs the B J S Rampuria Jain College in Bikaner, which we are told has three campuses, the largest of which is inside the walled city and houses the BCom, MCom, BA, MA, BCA and Fine Arts departments. The other two are the Institute of Management Studies and the B J S Rampuria Jain Law College. “B J S Rampuria Jain College is the largest private college in Bikaner,” says Rampuria. “It was named after Bahadurmull, Jaskaran and Sidhkaran and founded by Dadosa (Bhanwarlal Rampuria) in memory of his grandfather, father and uncle.”

Away from the world of business, Sunil Rampuria likes to take to the mountains to reconnect with nature. He is also fond of travelling, photography, reading and writing Urdu.

Back in Kolkata, Sunil Rampuria’s 83-year-old father Kamal Rampuria now looks after the family businesses, while the hotels in Bikaner are managed by him and his son Prashant. Rampuria’s other children are daughters Darshana, Sunanda and Sneha. While Darshana and Sunanda are married, Sneha is studying fine arts at the Karnataka Chitrakala Parishath, in Bengaluru. As for wife Anju, Sunil Rampuria considers her his comrade in arms and his stoutest pillar of strength and support, whose contributions in setting up the two hotels in Bikaner, he says, are unforgettable.