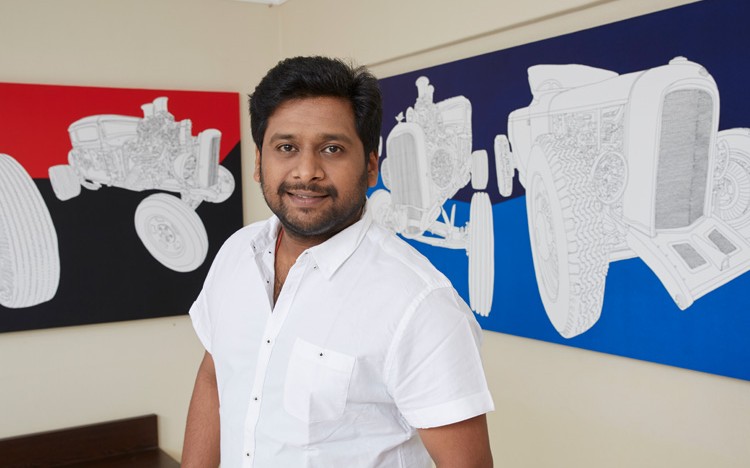 “I love the freedom of expression and interpretation that I portray on my canvas. I believe in simplicity, hard work and being true to my creativity. I feel spiritually connected to each of my subjects. I have been painting since I was a child. Back then I had not formed a distinct style of my own, but cars were something that I always wanted to work with. I have been painting cars for the past five years and have recently started painting bikes. I am inspired by pop art and by Andy Warhol [the American artist who was a leading figure of the pop art movement]. Living with two artists as parents, art has always been a part of my life.
Pursuing art as a career was a spontaneous choice.”

PRATIK SHARMA was born in 1987 to Charan Sharma, a contemporary artist, and Nimisha Sharma, who is known for her bold and energetic abstract paintings. Pratik’s great grandfather, Khubhiram Sharma, from Nathdwara, Rajasthan, had pioneered the work of gold embossing in Shrinathji paintings, while his grandfather, Motilal Sharma, was a fine Pichwai artist. Pratik’s maternal grandfather, Indra Sharma, was a master when it came to creating paintings of gods and goddesses.

Pratik’s craze for cars led him to Raffles Design Institute in Singapore, where he pursued a degree in product design. After his degree, he began creating ‘carscapes’ with pen and ink. Pratik concentrates on the frontal features of cars and the relational dynamics between them to give his paintings a certain realistic “face”. His first solo show was held at JW Marriott, Mumbai, in 2014. His second solo show will be held this February at Jehangir Art Gallery, Mumbai, after which, his works will be showcased at the New
York Art Fair.