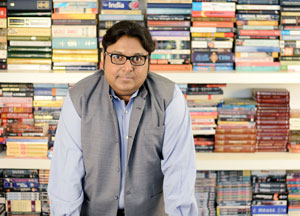 WRITER ASHWIN SANGHI CHURNS OUT YET ANOTHER BESTSELLER
Ashwin Sanghi, often referred to as the Dan Brown of Indian fiction, has launched his latest novel, The Sialkot Saga, which according to the HT Nielsen and Bahrison’s surveys, have climbed the bestseller chart to occupy the top slot soon after its release. Having enthralled readers with theological, political and mythological thrillers through previous bestselling titles—The Rozabal Line, Chanakya’s Chant and The Krishna Key—this time around, the maestro is back to take readers through a fast-paced business thriller that revolves around the lives of two businessmen-cum-rivals—Arvind and Arbaaz—whose lives are bound by a powerful ancient secret that could change the world. Published by Westland Ltd, the book is a heady mix of past and present, fact and fiction, history and mythology and business and politics. It follows the lives of the protagonists from the eve of Indian Independence to the present, weaving together threads that traverse across time, generations, geographies and emotions.

NEPAL BILLIONAIRE BINOD CHAUDHARY RELEASES HIS AUTOBIOGRAPHY
Nepal billionaire, Binod Chaudhary, who is the president of the Chaudhary Group that owns the Wai Wai brand of noodles apart from having interests in banking, insurance, finance, housing, hotels and real estate, has come out with his autobiography, Making it Big. Originally published in Nepali by Nepalese book publisher Nepalaya in 2013, the current English version has been revised and published by Penguin Group. Making it Big makes for an inspiring read where the feisty entrepreneur writes, in his own words, about his tumultuous journey from taking over the family business as a youngster to being listed as a dollar billionaire (Nepal’s first) by Forbes in 2013—all this amidst a volatile, unstable and unfriendly environment. The book was recently launched at a glittering ceremony in New Delhi by an august gathering that included actor Shatrughan Sinha, who is also a Member of Parliament; T Subbarami Reddy, Rajya Sabha MP of Andhra Pradesh; and other well-known personalities.

FUTURE GROUP TO BUY ONLINE FURNITURE PORTAL, FABFURNISH.COM
According to newspaper reports, the Future Group, led by Kishore Biyani, is all set to buy FabFurnish.com, a Gugaon-based online furniture store founded in 2012. This is the retail giant’s first acquisition of an online player. The Future Group will retain the FabFurnish brand name and the staff and management of the online company are likely to be retained also. With this acquisition, the Future Group looks to leverage FabFurnish’s online platform and delivery model to extend its reach in markets where the group’s brick and mortar home and furnishing brand, HomeTown, does not have a presence.

VEDANTA RESOURCES TO SET UP INDIA’S FIRST LCD PANEL PLANT
Anil Agarwal, the founder and chairman of Vedanta Resources Plc, a globally diversified natural resources conglomerate headquartered in London, has signed an agreement with the Maharashtra government to set up a $ 10 billion plant for making LCD panels (used in mobile phones, TV screens and computers) in Maharashtra. The said LCD unit, Panel FAB, will be will be operated by an independent company, Twinstar Display Technologies, that is promoted by the holding company, Volcan Investments, whose other investments include Vedanta Resources and Sterlite Technologies. The plant, which is the first of its kind in India, is slated to begin production in 2018 and achieve full production capacity over the next 10 years, subject to external environment. It is not only expected to lower the huge import bill for India’s fully import-dependent LCD panels market, but also earn foreign exchange through exports.