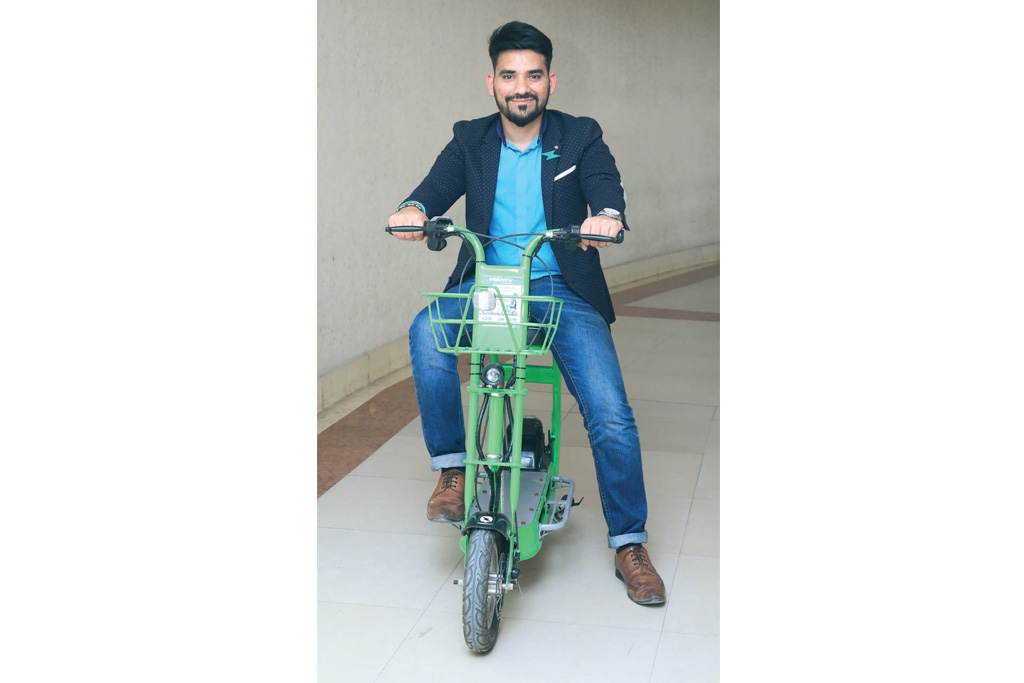 If there’s one immediate problem faced by commuters across India, it’s last-mile connectivity. Mobycy, a green-tech startup, has been tackling this problem, and in turn, a host of other urban conundrums including pollution and gridlock traffic. At the helm of this revolutionary micromobility start-up is co-founder and CEO Akash Gupta, who quit a high-paying job to pursue his dream of solving a problem faced by millions of people in the country.

We live in a time when terms like ‘e-cars’ and ‘e-bikes’ are slowly but surely creeping into our conversations. Such modes of transport would disrupt the traditional mobility ecosystem, reducing congestion, fuel consumption and vehicle emissions; and given increasing awareness about these issues, the future of start-ups like Mobycy look brighter than ever. The Gurugrambased company launched in August 2017 with a fleet of 1,500 smart dockless bicycles, before it turned its focus to electric scooters, in April 2018. Today, Mobycy, which takes pride as India’s first dockless electric scooter sharing app, has close to 500 electric scooters, branded ‘Zypp’, in cities like Gurugram, Delhi, Noida and Hyderabad. Since its launch, the Mobycy app has not only helped over 2,50,000 users save time and money, but also is steadily fostering the growth of sustainable and livable cities by reducing the number of cars and pollution.

I always wanted to solve a problem that would affect millions and billions of people. I thought if I could work so hard for any other company, why couldn’t I build something of my own

Mobycy offers convenience to commuters who would otherwise waste valuable time waiting for autorickshaws or taxis to reach their final destination after exiting, say, a metro or a railway station. Besides, at Rs.1 per minute, a ride of 3 km would amount to an affordable Rs.15-20.

The app, compatible with both Android and Apple devices, offers a user-friendly and seamless experience. Once the user downloads the app, registers and links a payment method, all they need to do is locate and unlock the nearest Zypp scooter by scanning the QR code and begin a ride. The app also notifies users about the areas closest to their destination where they can eventually park the scooter. New Mobycy users get their first ride free, and can earn MobiCoins on a referral basis. The company has also recently introduced MobiCoin Value Packs which give more bang for the buck.

Moving up the ladder 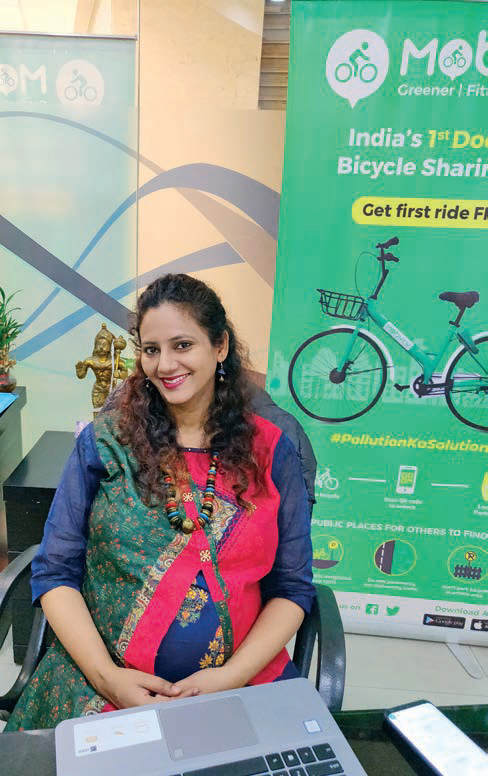 Before co-founding this revolutionary start-up, Akash Gupta worked in reputed firms for 11 years, holding senior positions. Born and brought up in Jaipur, he studied at St Xavier’s School and then completed his engineering as a college topper from Rajasthan University, before being hired at Infosys as a computer engineer. He went on to pursue an MBA in marketing and IT from IMT Ghaziabad between 2006 and 2008, and soon landed a campus placement in Dell Services, Noida, where he primarily worked on business development. Gupta also worked with Airtel for five years, starting with sales and gradually moving on to marketing, as National Acquisition Head, for the 4G launch in India. He was then hired by the e-commerce company Snapdeal and eventually headed marketing at MobiKwik.

Given his impressive career graph with names of several MNCs and start-ups big and small featuring in it, one wonders what prompted him to forsake the comfort of a high-paying job. “I’ve worked hard throughout my career and had been growing in my job every year, getting great appraisals. I became the VP and the head of marketing during my last two years at MobiKwik. So my career progression happened in a direction that was led by hard work and learning,” says the young entrepreneur, who comes from a family of businessmen. “But, at the same time, I always wanted to solve a problem that would affect millions and billions of people. I thought if I could work so hard for any other company, why couldn’t I build something of my own!”

We’re giving users a more organised and clean mode of commute, versus other forms of transportation. Besides, we create data related to traffic and pain points in cities, which we share with the government

Gupta was joined by his wife Rashi Agarwal and friend Anuj Patel who shared his vision of solving the issue of last-mile connectivity, by creating a start-up and turning it into a unicorn. While Agarwal was already running a fashion start-up and had worked with S&P Capital IQ as a senior research consultant for seven years, Patel had worked in the field of technology for companies like Ecom Express and Amazon.

“Rashi had the experience of working with start-ups and is good at finance and managing people, so it was logical to get her on board… especially when you’re building something big and you need to have a level of comfort and trust,” says Gupta. And as for Patel, he was a “good friend with a start-up mindset” who also wanted to do something of his own. As CEO, Gupta primarily leads marketing, product and communications with external parties like investors, while CFO Agarwal leads the finance department, human resources and operations. Patel works on the all-important technology side of things. 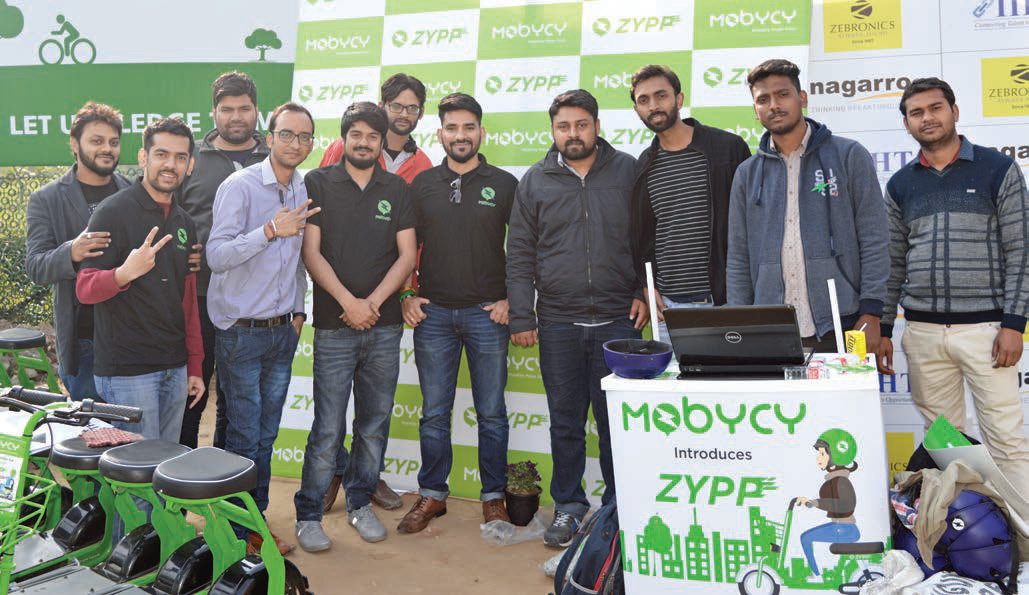 As is the case with any start-up, the early days weren’t easy for Mobycy’s co-founders. Agarwal and Gupta pooled in the initial Rs.30,00,000 which was just about sufficient to ready a prototype for launch in the market, while Patel brought his five-plus years of tech experience to the table. Fortunately, it wasn’t long before they were able to raise $5,00,000 in a seed round from an angel investor in the US. These apart, looking back, Gupta admits that initially it was also challenging to find good, talented people, who also believed in the future of the company.

Today, the company has over 35 employees. And, while 70 per cent of Mobycy’s revenue comes from rides, a second revenue stream that it relies on is from advertisements. “Brands in need of promotion can benefit from the hundreds of Mobycy vehicles running on the streets,” explains Gupta. A third source of revenue is B2B tie-ups with partners like hotels, universities and food delivery companies that hire Mobycy-branded bicycles and e-scooters on a monthly basis.

Mobycy has been recognised for its pioneering efforts and has won several awards since its launch. In September last year, it was awarded the NITI Aayog award for the best start-up in mobility in India. The ceremony was graced by Prime Minister Narendra Modi. “Government bodies have been supportive of what we’re doing, because we’re solving problems like traffic and pollution,” says Gupta. “We’re giving users a more organised and clean mode of commute, versus other forms of transportation. Besides, we create data related to traffic and pain points in cities, which we share with the government.”

With unprecedented support from governments, Gupta believes that the growth potential for Mobycy is immense. Further, Mobycy is currently finalising a $10-million Series-A funding to accelerate its expansion plans. Plans are underway to identify hot pockets with acute commute problems. “We’re looking at Bengaluru and Mumbai— cities which have problems that need solving. We’ve already tied up with MCG Gurgaon and have a contract with Rapid Metro Gurgaon and Hyderabad Metro and we will soon sign a contract with Delhi Metro. Many smart cities are talking to us because the solution we offer is easily implementable,” concludes Gupta. Needless to say Gupta is bullish about the success of micro-mobility in India, and why not. Given the rising congestion and mobility issues in our cities, the alarming rise in pollution levels and the push for sustainable growth, his optimism is well-founded.