Home People Aiming For The Top 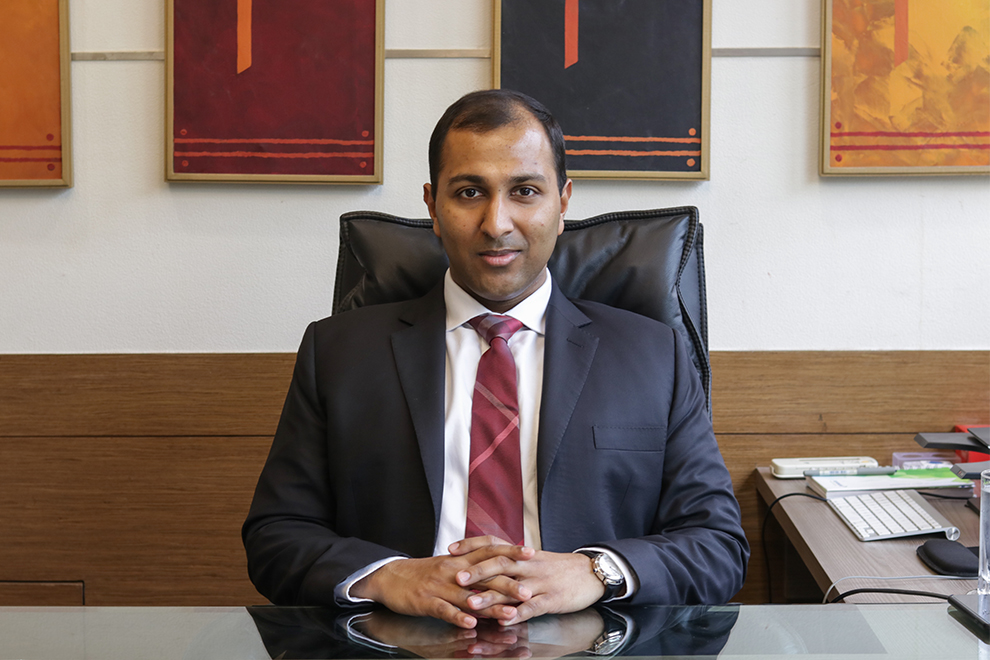 As a business family, the Agarwals of Responsive Industries have come a long way from the ‘70s, when the group’s non-executive chairman Rishabh Agarwal’s grandfather, Satyanarayan Agarwal, now 89, became one of the first entrepreneurs to bring power looms to India for his textile business. With changing times, the Agarwals switched to other lines of business such as chemicals, speciality threads and fabrics and then synthetic ropes in the late ‘80s. And then, in the early ‘90s, the Agarwals forayed into PVC flooring business as well.
Rishabh Agarwal, however, stepped into the family business in 2008, after graduating from Carnegie Mellon University, Pittsburgh, USA, where he studied mechanical engineering and business administration. He then worked for a year as a strategy consultant at Boston Consulting Group, in Boston, USA, before returning home to join the family business.

Leading players
Coming back to Responsive Industries’ businesses, specifically the rope and PVC businesses, over the last 30-40 years, the Agarwals have entrenched themselves firmly to be counted among leading players in these sectors in the country. While the PVC flooring business, which also has synthetic leather as one of its products, is handled by Responsive Industries Ltd, the rope business operates under the subsidiary Axiom Cordages Ltd. Besides being the non-executive chairman of Responsive Industries, Rishabh Agarwal is also involved in Axiom Cordages, and thus he plays key roles in both the companies. 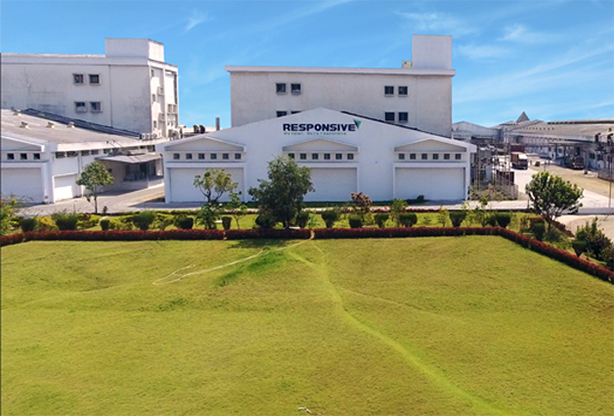 Axiom Cordages, a purely B2B business, specialises in synthetic ropes which are used for shipping, mooring and fishing. The company boasts excellent credentials, having grown organically since its inceptive years, when it had a collaboration with Daewoo Corp of South Korea. It now is the largest shipping rope manufacturing company in the country and exports to 65 countries. Talking about the impeccable quality of its products, Rishabh Agarwal says, “We have been at the forefront of this industry for a long time, and we don’t have a single coil of rope which has failed in our entire company history—which is a claim that very few others can make.”

Responsive Industries, on the other hand, manufactures vinyl flooring and synthetic leather. While the former finds application in commercial establishments, hospitals, schools, hotels, and the like, synthetic leather is mainly used for upholstery, home furnishing, shoes, bags, luggage and so on, with railways, OEMs, automotive companies and other institutions accounting for a large component of its sales. Responsive’ products, in general, are marketed through distributors, besides being exported and have institutional sales as well. 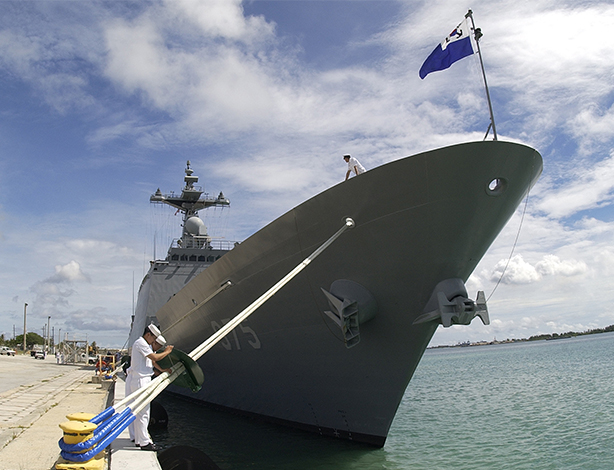 Recalling his initial years in the company, Agarwal says, “When I joined, I got involved in primarily two aspects of the business: The first was that in 2008 we had decided to do a capacity expansion—which we eventually did—and the other was to set up sales channels, in order to make sure that those capacities got sold.” Sure enough, by 2010, the Agarwals had built a huge asset base. Thereafter, with every passing year, Agarwal got increasingly involved with the business. Over the next few years, until about 2016, there was an explosion of sales to take the company’s turnover soaring. “That was an exciting period. Sales were increasing, distributors were increasing, and we increased our footprints globally,” says Agarwal. As the company grew, it picked up a string of awards as well. However, when it came to the bottom line, there was not much to feel excited about. And this led the Agarwals to take a strategic call and do something different.

“Today, my role is more strategic—to create a consumer brand,” says Agarwal. “The identity that we are creating is around the B2C brand, as that identity is what will drive the business in the future.” For this though, he needs to realign the entire company, get it to buy into the vision and then actually execute it and move forwards, as he has been doing. In the midst of this transformative journey, the turnover, however, has taken a hit. But there has been bottom line growth in the last 3-4 years, according to Agarwal. 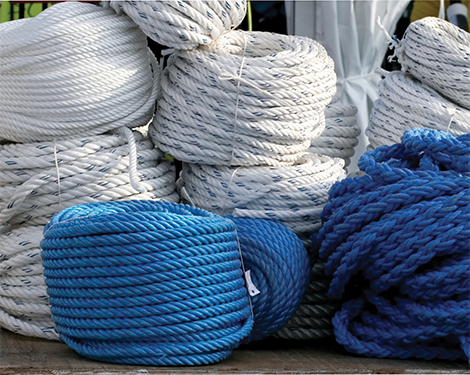 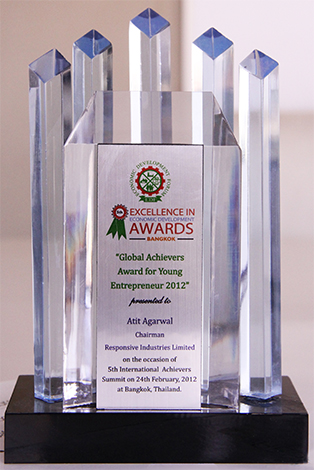 Global Achievers Award for Young Entrepreneur 2012, presented to Responsive Industries Ltd, on the occasion of 5th International Achievers Summit, held in Bangkok in 2012

Also, the business has been professionalised now with a CEO, CFO and professional sales heads in place. Rishabh Agarwal, however, is still involved in all key fronts of the business and has a very keen understanding of the entire value chain, right from raw materials to manufacturing to sales to even installation and technical services. His other major role is to make sure that good people stay in the company. These apart, he handles media relations and PR activity as well.

In February this year, Responsive has launched a new line of luxury vinyl tiles, Impact, which Agarwal says is meant to change the fundamental concept of flooring. A breakthrough product, it comes with a system of interlocking joints, and can be installed atop any flat floor, be it of tile, marble, or board—without the use of any adhesive. The range is waterproof, comes in different looks—wood, stone, marble—can be installed very fast (5,000 sq ft in 3-4 hours) and can be dismantled and reused, when changing homes. These characteristics make the range a game-changer and Agarwal, therefore, is bullish on it, expecting sales of `25-30 crore by the end of the very first year.

Coming to manufacturing capabilities, Responsive Industries’ products are made from fully recyclable materials—in mechanised and automatic plants at its factory in Boisar, near Mumbai. It has 15 manufacturing lines and operates with an installed capacity of 66,100 sq ft of vinyl flooring and 26,400 sq ft of synthetic leather.

On the domestic front
At home, Rishabh Agarwal is a happy father with two little children, Maira and Nirvaan. Maira is six now and Nirvaan just 20 months old. Rishabh’s wife, Rohini, is a graphic designer from the Rhode Island School of Design. The two got married in 2011. 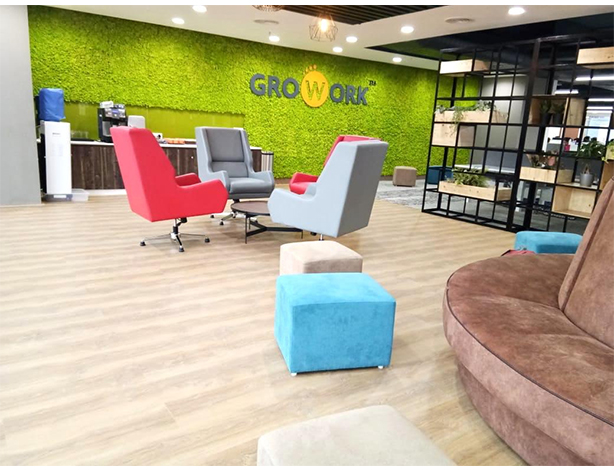 Looking back at the years gone by, Agarwal says, “We started with a paid up capital of hardly `10 crore, and today, if you look at the market cap, it’s about `2,500 crore, and our asset base is north of `1,200 crore. So we have gone from a very small capital to a very huge capital.”

That may well be so, but with family elders having crossed the 55-60-year age bracket, it’s for the next generation to drive the next leg of growth. What the future will bring, only time will tell, but Rishabh Agarwal, as the man at the helm of Responsive, is optimistic.