They say it is never too late to follow your dreams. As a child, Manoj V Jain had been a voracious reader and dreamt of becoming an author. In his teenage years, he even took to writing and getting his works published in college magazines. However, as time flew by, he had to keep up with life’s other commitments, and his dream of writing fell by the wayside. But all that changed a few decades ago when Jain, then in his late forties, launched his first novel, The BNO, in 2016. Six more novels followed: The THC, Balraj, Ramona, Dystopia, A Man from Mandu and Meeting Yama, which hit the bookshelves recently.

One might wonder what made him turn his childhood dream into reality after so many years. Jain explains: “I always wanted to write a book, but felt the time for doing so was gone. Besides, I was not confident, as I used to read modern books to my children and was amazed to see how fiction writing had evolved. It was my nephew who encouraged me to start a blog, and that is when I started writing again.”

Asked about his formative years, Jain says, “We grew up in a very social environment, where meeting people and interacting with them was given more importance than studies. We were encouraged to pursue the arts—my sisters and I learnt to play musical instruments and sing. We also dabbled in oil painting and theatre. Dinner time meant sitting together with the elders and discussing business decisions with them, right from an early age.” Understandably then, he has followed the same practice with his children, making many an important business decision after discussing it with them over dinner, or during a walk.

Jain completed his post-graduation from IIM Ahmedabad in 1988. Reminiscing, he says, “It was a two-year course and my stay at the institute was a major influence on my life as it shaped the way I thought and did business—if it had not been for it, I would have still been working at my father’s gaddi in Kalbadevi [in Mumbai].” He then started a business that dealt with the export of garments. However, still hungry for academics, in his mid-forties, he pursued a master’s degree in psychology and also learnt Spanish.

Coming up with the right idea for a book can be a challenge regardless of how experienced one is as an author. Jain’s inspiration comes from his keen observation of people, vivid dreams and his wild imagination. Having studied psychology, these help, as they enable him to make use of his learnings to portray human behaviour through his writing. Moreover, he has always been fascinated by other people’s stories, and his frequent travels abroad provide him with many an opportunity to meet new people and listen to their interesting stories! These give him unique insights into the way others think. “I try to keep my novels visual so as to help readers visualise the story; credible, because at IIM Ahmedabad, we were always told to keep our analysis logical; and short, because in today’s world, people are bombarded with more information than ever before and thus prefer quicker and shorter content to save time,” says Jain. 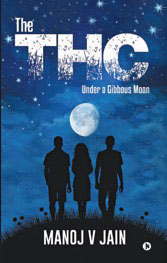 Sometimes, authors can pinpoint the exact moment when they were struck by a particular idea or character for a new novel. One such moment came for Jain during a trip to Varanasi with his wife and friends in February 2020. It was all the fuel he needed to write his latest book, Meeting Yama. Reminiscing, Jain says that he had an epiphany when they were visiting Manikarnika Ghat, one of the holiest cremation grounds in Varanasi. He recalls breaking down in tears and feeling as if he were transported into another time and space. The experience, though short, left an indelible impression somewhere deep into his psyche and sparked a thought process within him, leading him to write Meeting Yama.

Meeting Yama dwells on death and is interspersed with stories from Indian mythology. Jain, however, says that the novel is more about telepathy, dreams and the duality of human nature—that everyone is capable of good and evil deeds. “I have realised that every reader learns something unique from a book, depending on which stage of life they are in. This is why every book gives us many other messages when we reread it at a later stage of life.”

Jain, who tends to put himself in the shoes of his protagonist when writing a novel, found the experience of writing Meeting Yama more intense than his previous novels. He had to do a lot more research and also practise meditation and tratak (a technique that involves gazing steadily at a particular point without blinking the eyes) for a few months before he could write it. 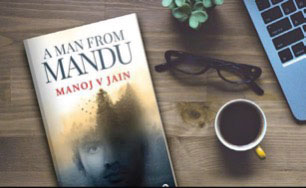 The cover of ‘A Man from Mandu’ by Manoj V Jain

Coming to his family, Jain is grateful for the immense support he has received from them in all his endeavours so far. He also considers himself very close to his sisters and the extended family. He currently lives in Mumbai with his wife and mother, his father having passed away a few years ago. His children are studying abroad.

Thoughts for the future

Asked about what novel he plans to work on next, Jain says that he has two stories in mind, but is unsure of when they will come to fruition, as he is yet to hear the characters “speak” to him. Currently, he juggles his business with his writing and, interestingly, online lessons in Sanskrit and Ayurveda—something new that he has taken up.