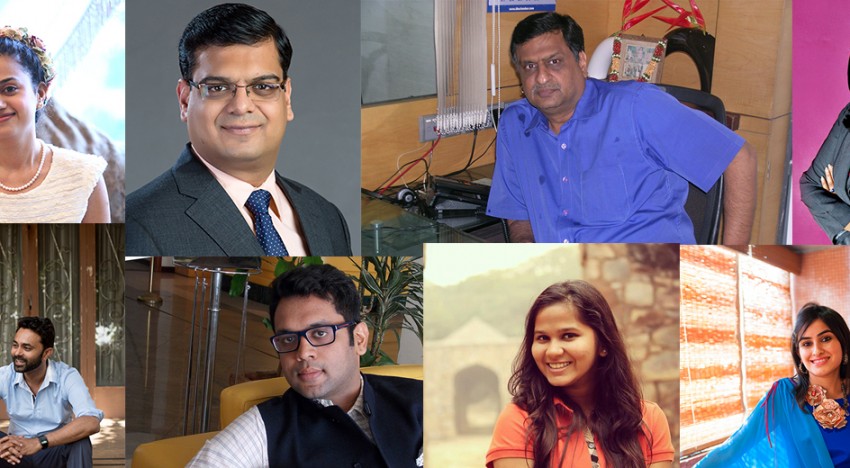 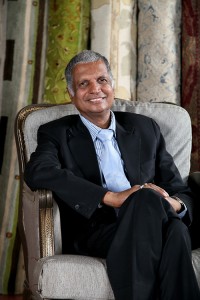 Set in a beautifully groomed neighbourhood in America, the house is
splendidly opulent. In the drawing room, an enormous pastoral landscape mural fills the
largest wall, but what attracts attention most is the striking, colourful rug lying in the middle of the room. Created by hand-weaving nearly one lakh asymmetric knots of hand spun wool and bamboo silk in every square metre, the 10×14-feet rug has been eticulously produced by rural artisans employed by Jaipur Rugs, an export-oriented, high-end carpet and rug maker from Jaipur. “Some of the most beautiful hand-knotted, tufted and flat-woven rugs in more than 40 countries across the world have been woven by our network of 40,000 home-based artisans spread across India,” says Nand Kishore Chaudhary, the 61-year-old founder of Jaipur Rugs. 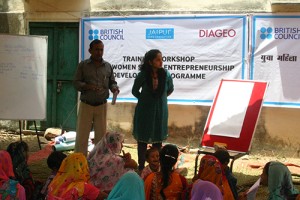 Empowering artisans
“The only thing that drives prosperity and job creation and helps people earn a sustainable
livelihood is entrepreneurship or business,” states Chaudhary. Established in 1999, Jaipur
Rugs is helping impoverished and illiterate weavers—approximately 85 per cent of whom are women—from the most economically disadvantaged regions of Rajasthan, Gujarat, Bihar, Jharkhand, Uttar Pradesh and Madhya Pradesh gain access to local employment. According to Chaudhary, “Our weavers come from families below the poverty line; for some, the work at the loom represents their sole source of earning, while for others—weavers who work part-time—taking up weaving is a means to supplement earnings from other pursuits.” Though the artisans are not on the company’s payroll, they are provided professional help and training in advanced carpet weaving techniques and quality control. “The looms are provided directly to them, so that they can work from home. This allows women weavers to take time off to look after their families and do household chores,” says Chaudhary. 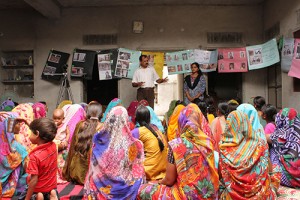 Removing middlemen
The company has worked hard to develop direct relationships with weavers, who have historically worked for exploitative middlemen, who still exist at the grass roots of the rug industry. The handmade carpet supply chain is multi-layered, often with many contractors and subcontractors between the exporting company and the people who actually weave the carpets. These intermediaries absorb a significant sum of money as commission for expediting work, distributing the raw material to weavers and making payments to the highly-skilled artisans. As a result, weavers lose out on what they actually deserve and instead are paid a paltry sum. “Carpet artisans had little access to markets, and remained unaware of the latest designs and current market trends, and continued to manufacture carpets with old designs that failed to generate appeal among the consumers. It is because of this lack of information that middlemen triumphed.” 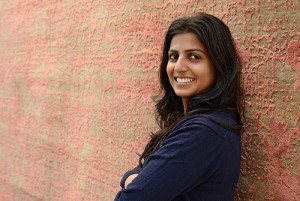 Chaudhary believes fair and timely wages are the key to preserving the future of carpet weaving. “Currently, small-town contractors pay a weaver R70-80 per day, a far cry from the R250-300 we pay them for an eight-hour workday. Payment depends entirely on the contractor’s whims, and weavers working with us have shared pitiful tales of being paid less than what was promised to them, or sometimes not being paid at all,” he says. The situation at Jaipur Rugs is entirely different: not only is the raw material delivered to the artisan’s doorstep, but the company also picks up the finished products from their homes and even pays them there.
Today, more than five lakh Jaipur rugs with diverse knotting styles, surface textures and fringed edges are painstakingly made every year on 7,000 horizontal and vertical looms by weavers in 600 villages across India. The company’s quality supervisors from its 22 branches across India go from loom to loom to routinely send out reports on the progress made, as well as to monitor the quality. “About five to six days before a carpet is to be completed by a weaver, we deliver the raw material for the next one. That way, the weaver is assured of year-round work, while we make sure the loom isn’t idle even for a day,” says Chaudhary. 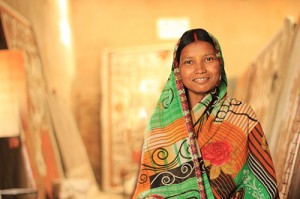 The artisans bring creations conceptualised by Jaipur Rugs’ in-house design team to life, with Chaudhary’s third daughter, Kavita, at the helm. The diverse team—comprising 50 researchers, patternists and colourists—hones its skills by studying the newest techniques in carpet-weaving and blending casual design styles with local flavours. The result is a sophisticated collection infused with a rich, modern palette—featuring perhaps a bohemian take on a traditional oriental design, a myriad patchwork of impressive shades or a novel interpretation of vintage designs.
In 2014, Jaipur Rugs embarked on a new experiment of encouraging its most experienced weavers and artisans to weave rugs using their distinctive designs and colour schemes, and not according to the designs given by the company. The very first artisans’ collection was a tremendous success with customers. “In some cases, we even received eager requests from customers for meetings with the weaver responsible for the creation!” exclaims Chaudhary. His eyes sparkle with pride when he speaks of instances where customers and weavers have sat together and brainstormed the design elements
for carpets. 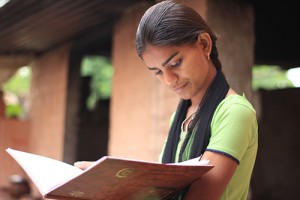 The Jaipur Rugs Foundation
Jaipur Rugs works on a unique business model that incorporates CSR in a major way within its framework. In 2004, Chaudhary took a crucial decision that would employ his sense of philanthropy and civic education and instil commitment in current and future generations of carpet weavers in the best way possible. The Jaipur Rugs Foundation (JRF) was established as a voluntary, non-profit, secular organisation and was registered under the Rajasthan Public Trust Act, 1959.
The foundation has taken upon itself the task of providing specialised medical assistance to rural folk living below the poverty line. “We organise at least six health camps every year, and we send our staff members to conduct a survey of patients in each household of the village and create awareness a month before the camp,” Chaudhary says. On March 29 and May 14 this year, a medical team from the Jaipur Calgary Eye Hospital was invited to conduct free eye camps at Kharkhada village in Jaipur and at Ghad village in Tonk district, both in Rajasthan.
Chaudhary believes in promoting women weavers’ literacy, numeracy and life skills. Hence, the foundation, with an aim to empower illiterate rural women with decision-making capabilities, initiated the ‘Alternative Education Program’ in 2010. Village teachers were roped in to teach 1,500 women, in modules of 25 weavers each, to read and write. Currently in its sixth phase, the programme is tutoring around 150 women across six villages of Rajasthan.
In 2013, British firm Diageo, in association with the British Council, launched the ‘Young Women Social Entrepreneurship Development Programme’ in India. The programme sought to identify women working in social enterprises and organisations that support women and coach them to become ‘master trainers’, who could in turn train aspiring women social entrepreneurs. Two employees from JRF were invited to attend a seven-day training programme at the prestigious Indian Institute of Management Kozhikode (IIM-K). “Richard Everitt, Director Education, British Council India, met me at the Jaipur Rugs head office. As 85 per cent of our weavers were women, I felt it was a good idea to collaborate with the British Council,” says Chaudhary. The first chapter of the three-day programme made its debut in 2014 at Narhet, a village in Alwar district, Rajasthan. Women from the grass roots, aged between 18 and 35, were taught to change the way they approached their work and develop an entrepreneurial mindset. The second phase was initiated in January 2015 at Bariana village, Khawrani, while the latest one took place at Med village, Jaipur, from June 16-18.

Spools of memory
Chaudhary’s tryst with carpet weaving began in 1978 in the sleepy Churu
district in Rajasthan. His father, Bhani Ram Chaudhary, owned a shoe shop there, and after graduating with a bachelor’s degree in commerce from Lohia College, Chaudhary joined the business. “Back then, Churu was a small town without much purchasing power, and I soon realised that there wasn’t
much potential in selling branded shoes,” shares Chaudhary. In the late 1970’s
and the early 1980’s, India witnessed a huge jump in the demand for hand-knotted carpets.
The phenomenon spiked Chaudhary’s interest in the carpet industry. “Back home in Churu, the government had set up a training centre to help weavers master carpet-weaving skills. I thought that if I were to start my carpet business, then sourcing skilled weavers would not be difficult,” he says. He saw that weaving was mostly done by untouchables, and despite resistance from his family, he decided to hire a master weaver and eight weavers from the socially backward Chamar caste. It is this passion for philanthropy that has earned the foundation noteworthy awards including the Social Enterprise Award by Sankalp Forum in 2010; Villgro Social Enterprise Award 2011 by Villgro Innovations Foundation India; Times of India Social Impact Award 2012; and Social Innovation Honours 2014 by NASSCOM Foundation. In 2010, management guru C K Prahalad released a case study on Jaipur Rugs in his globally acclaimed book, The Fortune at the Bottom of the Pyramid, which features Chaudhary’s business philosophy.
The foundation is currently focusing its efforts on changing the prevailing gender ideology in the carpet weaving industry—to demystify the image generally held by the masses about women being housewives and mothers only. And as for the future, Chaudhary hopes to include weavers’ contribution in the national economic statistics.