Home Cover Story Up the Ladder of Success 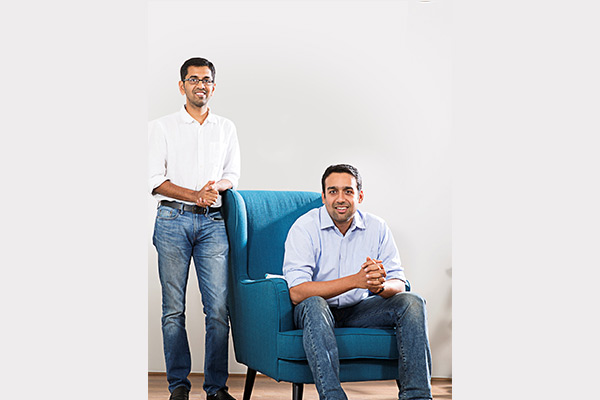 Ashish Goel’s brilliant academic background, successful stints in multinationals and the ability to build businesses point to an inner drive to excel. But what’s most amazing about the electrical engineer is his feat of outshining in a line in which he had no prior knowledge or experience! Meet the cofounder and CEO of Urban Ladder, the country’s fastest growing furniture retailing brand.

LIFE’S TWISTS AND TURNS CAN LEAD TO unfamiliar roads, and such has been the case with Ashish Goel, the CEO and co-founder of Urban Ladder, a top furniture retailing brand that stands out for its reliability, aesthetics and customer service. Having acquired an integrated master’s degree in electrical engineering from IIT Bombay and then an MBA from IIM Bangalore, the career of choice for him should have been a business related to electrical engineering—considering his Marwari background—but not something as diametrically opposed as furniture. Yet furniture it has been for Goel and Rajiv Srivatsa—his batchmate from IIM Bangalore and the co-founder of Urban Ladder—whose ardour, diligence and complementary skill sets have helped them build India’s most loved furniture brand.

The transition from campus to boardroom, however, was a gradual one for Goel, with successful stints in several organisations in between such as McKinsey & Company, where he worked as engagement manager; India Book House, where he was managing director; and Amar Chitra Katha Media, where, as chief operating officer, he played a key role in strengthening distribution, launching online services and partnering with TV, film and other mass media. However, deep down somewhere, there was an entrepreneur in him all along, as becomes evident from the various unconventional assignments he had picked up while still in college, such as running a mess in the campus during summer breaks—and profitably at that; reviving the campus newspaper; establishing a successful consulting club at IIM Bangalore; among others.

One of the takeaways from Goel’s corporate days was realising the importance of value creation, which according to him stems from understanding your audience, knowing what they are looking for and driving for the right answer. It is this fundamental learning that prodded him to start his own business. But why furniture? “I fundamentally believe we are all more than the sum of our education or qualifications, and the overarching drive to learn and create is degree agnostic,” says Goel in response. “For Rajiv and me, it wasn’t about doing what we’ve always known, but about taking what we know and using that expertise to create something new.”

According to Goel, it all began with the former batchmates moving to Bengaluru with their families in 2011. In Bengaluru, finding and furnishing their new homes with furniture of choice, however, proved to be a never-ending and tedious search. This, serendipitously, helped them though to zero in on the line to pursue for the start-up they had in mind, for which they had been exploring possibilities for quite some time. “We saw the opportunity to build a company that would provide furniture and home decor solutions with just a click. The underlying concept was to be an online-first company, building value in a growing market,” explains Goel.

With that, the duo started operations from a small bungalow in 2012. Initially, they were a small group of five passionate people, but with time, better and brighter minds joined forces with them, and today Urban Ladder has not only completed almost seven glorious years of existence, but also is India’s fastest growing furniture retailer. It has gone omnichannel in the meanwhile and has both online presence (through an app and company website) and offline stores now, of which there are 11 in the Bengaluru and Delhi NCR regions. Striving to organise the furniture market, it has also captured a significant share of the unorganised and under-penetrated furniture sector in the process. Understandably then, its revenue has grown by 40 per cent in FY17, and Goel expects a CAGR of 40-50 per cent over the next 3-4 years. 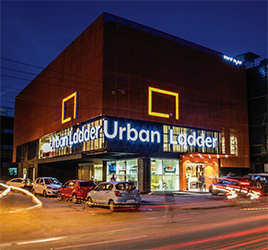 Above: The 7,200 sq ft Urban Ladder Experience Centre in Bengaluru

A consumer-focussed brand Part of Urban Ladders’s growth, of course, owes to investments of $112 mn from various investors, which Goel says has helped the company establish itself as an omnichannel brand across a hundred cities in India and also bring together some of the brightest minds in the industry to create a world-class furniture brand. That apart, behind Urban Ladder’s soaring popularity also lies the efforts of a dedicated in-house design team that creates beautiful and highly functional furniture collections, while the brand’s manufacturing partners give them form and finish by using the best methods and raw materials.

For Rajiv and me, it wasn’t about doing what we’ve always known, but about taking what we know and using that expertise to create something new

In this quest to stand apart from other retailers, Urban Ladder has had to adhere to a slew of guidelines aimed at customer satisfaction that include the promise of quality, beautiful designs and exceptional customer experience. “Our retail, delivery and customer service teams work round the clock to support our hundreds of thousands of customers and help make their homes beautiful,” says Goel. “Further, we have a clear set of values defined for the organisation, or C.H.A.S.E., which stands for Customer Obsession, Honesty, Action Orientation, Stepping-up and Efficiency. All of us at Urban Ladder live by these guiding principles.” 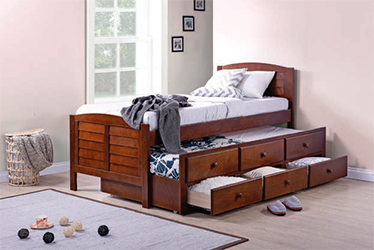 Clockwise from top: Furniture on display at the Urban Ladder Flagship Experience Centre; Fitzroy Single Bed with Trundle and Storage

Vision and mission Emboldened by their successes, Goel and Srivatsa are now chasing the ambitious goal of an IPO in the next 18 months. They are also planning to open flagship stores in other cities like Chennai, Hyderabad, Pune, Ahmedabad and Kolkata. Future plans also include extension of the brand opportunity to other entrepreneurs and franchise partners in Tier 2 cities.

Beyond Urban Ladder, Goel mentors start-ups, which he says is a great learning opportunity for him, considering India’s amazing talent pool and flourishing start-up ecosystem. The energy and the kind of mindset that today’s young entrepreneurs display, not only inspires him to keep growing and moving, but also to encourage forward-thinking minds and innovation.

At home, Goel tries to squeeze time out for an hour of cooking and exercise every day. Leisurely hours are usually spent reading science fiction, or going on long drives, and work permitting, he loves to set off on adventures across unknown planes.