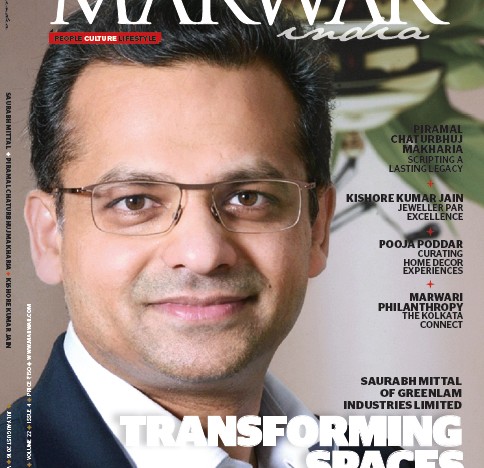 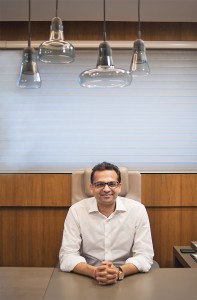 Greenlam Industries Limited, which boasts a consolidated net revenue of R1,030 crore from operations in FY16, was formed when Greenply Industries demerged in 2014. MARWAR talks to Saurabh Mittal, Managing Director and CEO, Greenlam, and son of Shiv Prakash Mittal, founder and executive chairman of Greenply, to understand the growth trajectory of the company, which is now Asia’s largest laminate producer.

Success should be measured by time, someone once said. This adage stands true when it comes to the journey of Greenlam Industries Limited. Although Greenlam laminates as a brand was launched in 1993-94 under the Greenply Industries umbrella, Greenlam Industries as a company was created in November 2014 after it demerged
from Greenply.

Already the market leader in Asia and amongst the top three laminate manufacturers in the world, the credit of this rapid yet steady growth goes to Saurabh Mittal, MD and CEO, Greenlam. Saurabh’s training under his father right from his college days prepared him for handling and expanding Greenlam all by himself. 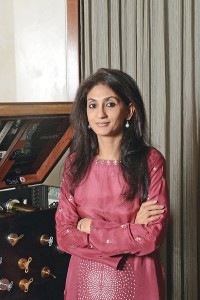 Greenlam was started in 1993, before which Saurabh’s father, Shiv Prakash Mittal, worked for Kitply. “When I joined the business, I used to work out of a very small office in Paharganj, Delhi. Obviously the initial years were very challenging in terms of capital availability, team building, building the brand and setting up the manufacturing and distribution systems,” Saurabh says,

The Greenlam-Greenply combined was set up by Shiv Prakash Mittal, Saurabh and his uncle. Saurabh reminisces, “It was around 2004-05 when things really started turning around for us. We had made expansion plans, we had attracted private equity, we raised some capital and we had built a new plant. At that point it was a single company and we expanded the laminate division, started the veneer business and set up a large laminate manufacturing facility in Himachal Pradesh.”

The company grew by 20-22 per cent from 2003-04 to 2014, and became a clear leader in the laminate, veneer, flooring and plywood segments. Greenlam had started with just a one-production line plant in Alwar, Rajasthan, in 1993-94.

Saurabh’s father had very humble beginnings and when he started his career he used to bring trucks and supply veneers to several private factories. After working for Kitply for over two decades, he decided to start his own business in 1993. The family used to live in Tinsukia, Assam.

“My father has been an inspiration in terms of his discipline, consistency towards hard work and focus and risk-taking capabilities, in spite of not having a huge capital in the beginning. He is a self-made man,” Saurabh says.

In 1993 Saurabh finished his Class 12, after which his father moved to Calcutta (now Kolkata) from Assam, and he shifted to Chennai. The family bought a small granite business (which was later sold off) and Saurabh attended college and then went straight to work. “Technically, my dad and I started business together. I
used to run a branch of the company till 1999. In 2000, I joined Greenply. I have been in business for the last 15-16 years in the Greenlam-Greenply combine,”
he says.

Since Class 5, Saurabh has studied in boarding schools, moving from a school in Assam to St. Paul’s School in Darjeeling (West Bengal) and Mayo in Ajmer (Rajasthan). He later did his graduation from Chennai. “I joined my father in business very young, and so did not pursue higher education beyond my graduation,” he says. 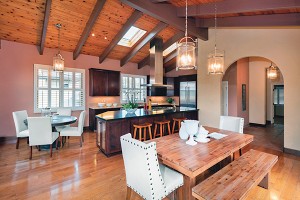 While Saurabh runs Greenlam Industries independently, his father, uncle and brother are still with Greenply. “My father is the non-executive chairman of the board in Greenlam. My wife is also on the board and has been working in the business for the last 10-12 years,” Saurabh says.

Greenlam has separate manufacturing, sales, marketing and finance departments and also has international subsidiaries headed by CEOs in America and Asia.

What started as just a laminate business, now manufactures veneer, owns a flooring plant, a door plant and works very much like an Indian MNC. The company exports to over 100 countries worldwide. In the next couple of years, Saurabh wants to build a valuable, growing business that creates benefits for all its stakeholders. “We want to have a combination of growth and high quality balance sheet. So, we are running the business in a manner to reach that goal,” he explains. 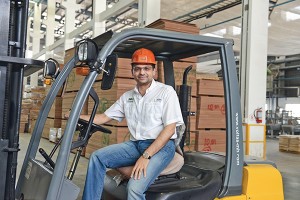 Greenlam has branch offices in practically every state in India and distributes to nearly 12,000-15,000 distributors in the country. The company also has 17 offices globally—America, the UK and various parts of Southeast Asia such as Singapore, Thailand and Malaysia. “These offices are under our subsidiary companies. We also have about 11-12 regional distribution centres in India. We have two manufacturing plants, one in Rajasthan (between Delhi and Jaipur) and the other in Himachal Pradesh (on the border of Punjab and Himachal). All the manufacturing work (both for the domestic and export markets) is done in India,” Saurabh says.

Greenlam has already invested more than R250 crore of capital expenditure over the last two-three years. “We expanded the laminate business last year by 20 per cent, added a new flooring plant, added new products in the veneer and laminate categories and set up a new door plant. New category creation has been going on for nearly two years. However, for this year, we do not have any significant expansion plan,” Saurabh says. But, Greenlam is really focused on executing their expansion plans that were started last year. This year, they are putting more emphasis on streamlining capacity and the capability additions that have already been undertaken. 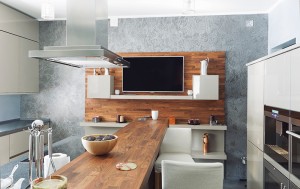 In India, laminates is a very aggressive and growing market and it takes a lot to stay ahead of competition. So, how does Greenlam manage to do this? Saurabh replies, “You stay ahead because you’ve got talented people working for you, a good sales and marketing team and a robust distribution network. We have very deep distribution networks, both in the domestic and international markets.”

“In terms of manufacturing products and distribution costs, we are way ahead of many local competitors. But the unfair level playing field puts pressure on us in terms of margins and ability to scale up the volumes,” he adds. Saurabh says that the company managed to overcome challenges due to the robust strategies of product innovation, design, marketing, distribution and efficient manufacturing. He attributes the combination of all these and the global push Greenlam undertook to boost exports as reasons behind their being market leaders.

In the beginning, Greenlam was the OEM (Original Equipment Manufacturer) for the world’s no. 1 laminate company and never exported their own brand. From 2006-07, they changed the strategy and all the exports are now done with their own brands. 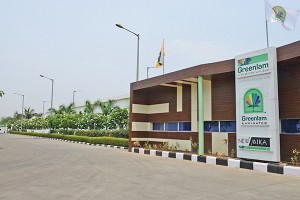 Over the years, Greenlam has launched various products and added many brands. “We have launched facade laminates and several new decor and textures under the Greenlam brand. These are all high-class products. In veneers, we are doing stain products and a lot of distressed wood products, while flooring is a completely new segment where we are the only producers in the country. We are also venturing into pre-hung and pre-produced doors which are installed with frames. I don’t think anybody else in the country is doing this. We are actually introducing a lot of new and efficient products for the domestic market, which is an after-effect of global exposure and understanding of international designs,” Saurabh says.

Greenlam’s product launches are driven by furniture producers and design paper printers in Europe. Most trends in India are driven by what is being done in Europe, in terms of furniture designs or veneer designs or laminate designs. “But trends keep changing. These days oak veneers and oak laminates are very popular. A different theme in design appears every two-three years, and as a market leader you have to stay on top of these changes,” Saurabh says.

“Greenlam itself has the word ‘green’ in it, does it not?” smiles Saurabh. “It implies that we’ve been at the forefront of driving a lot of green practices in the country in our category. We were the first to receive the prestigious ‘Green Guard’ certification in India,” he says.

A boiler in one of Greenlam’s plants runs on husk instead of coal or petroleum coke. A laminate or interior business has two aspects—one is the finished product and the other is the source of raw material. “Most interior products have to have a chemical coating or a surface on top that is paint or laminate or veneer. Most of our products are eco-friendly from that perspective, and hence we are ‘Green Guard’ certified. We are also PEFC certified—the wood we buy for our veneer business is sourced from responsible forestry. So we are a responsible company in terms of where we source our raw material from and what the levels of emission from our finished products are,” Saurabh says. 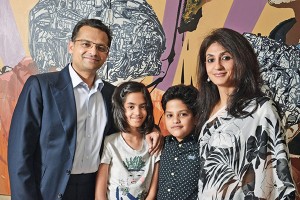 Saurabh’s family originally belongs from a town called Laxmangarh in Sikar district of Rajasthan. But that was until his grandfather moved to Assam in the early seventies. “We still have our haveli there and visit our hometown once a year,” Saurabh says.

“I am a proud Marwari,” he smiles. “Most Marwaris are extremely focused in what they do. I think the attention to hard work, a value system and leading a good quality life but living within one’s means helps our migrant mentality to adjust and adapt in any situation or place. All these qualities make us powerful and help us succeed.”

Saurabh lives in Delhi with his wife and twin children, a 10-year-old boy and girl. His wife has been a great support, and even the children are getting subconsciously trained to work hard and build a meaningful life. “As for their joining Greenlam, it depends on how things go. Deep inside you want them to be a part of it. If the business is of any value when they grow up, then I would like them to take it to greater heights. But, if the business is not of much value, and they can do something better, then I’d be fine. It would be their decision to make,” he says.

A person who has to travel extensively for work, he makes sure he spends enough time with his wife and children and takes them for vacations once every year. So, how does it feel to be so successful at such a young age? “I am yet to be successful. Discipline and focus has brought me where I am. My urge to learn and grow continues to live within,” he smiles. ✲