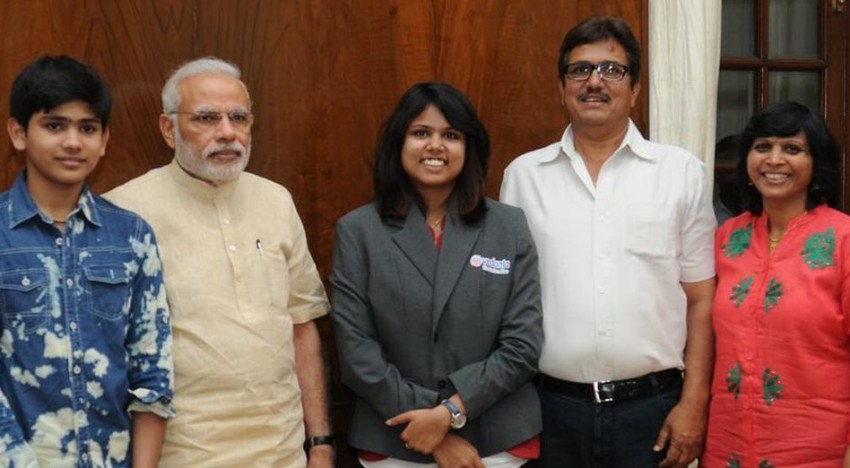 Bhakti Sharma is barely 26 and she has already conquered all the five oceans of the world, not to forget other prominent swimming championships and an MBA to boot. MARWAR talks to the Rashtrapati award winner, who is currently undergoing rigorous training for the open water events of the 2020 Summer Olympics. 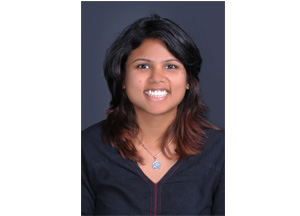 IT’S PARADOXICAL TO THINK of a mermaid in the desert, yet for ace swimmer Bhakti Sharma, the ‘mermaid’ nickname fits like a glove. What better sobriquet to explain the swimming sensation from Udaipur whose playground is the open seas and whose true element is the water.

An early plunge
Having been introduced to the bathtub as a toddler of two-and-a-half, the secret to Bhakti Sharma’s success perhaps lies in her early start. The very first lessons of her life were aimed at inculcating a natural fondness for water. Thankfully, these lessons stood her in good stead and brought her success way beyond the expectations of her equally water-obsessed mother-cum-coach, Leena Sharma. “When I first put her into the water, my only aim was to teach her how to swim well; but very soon she showed her calibre, and I started thinking of national medals,” says Leena, an ace swimmer herself.
From the very first year of her training, Bhakti started competing in prestigious events and winning too. Recalling those days, she says, “I won district level tournaments and even participated at the state level.” To put into perspective how young she was then, she narrates an incident: “I remember being this tiny girl standing on the starting block for a 200 metre race and was probably the youngest participant. The timekeeper asked my mom if I would be able to complete the race. My mom smiled and assured him that I definitely would.” 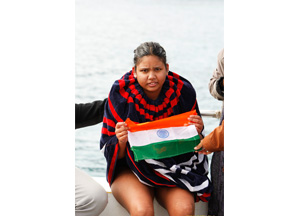 Across the English Channel
The journey of competitive swimming continued and soon there were three CBSE National Swimming Championships to her credit and several state championships as well.
In the winter months, when most Udaipur lakes would close down, on special request, some would allow her to continue to practice, giving her valuable experience of swimming in cold water and unhindered over long distances. “It used to be just me in the pool with my mother on the deck,” Bhakti reminisces. “We saw that I was good at doing long distances, and since I was adjusting to cold water well, my mother asked me if I wanted to give the English Channel a try. I said ‘Why not!’, and that’s how we started training for long distance in Mumbai in November 2003. I did my first swim in December that year of 16 km [from Uran Port to the Gateway of India].” Swimming sans the restrictions of a pool was something new to her, but it was a refreshing and exhilarating experience. And though the sea was choppy, she loved riding the waves and enjoyed every bit of it.
The following year saw her increase the distance to 36 km. This time it was from Dharampal to the Gateway of India. Interestingly, it is the same distance from Shakespeare Beach in Dover, England, to Calais in France. As one would suspect, soon after she was buffeting the currents across the English Channel in what was to be her most daring and greatest accomplishment yet. The year was 2006 and Bhakti was just 16 then.
The immense sense of achievement that this feat brought can be gauged when she says, “The English Channel is considered the Mount Everest for swimmers, because it comes with no guarantee of success. The currents are really tricky and change drastically, which make the swim so difficult that people have had to give up when they were only one to two kilometres from the finishing point.”
The next year she again attempted to cross the English Channel, but this time in a relay swim with her mother and her friend Priyanka Gehlot. The trio took to the sea and after swimming for nine hours got seasick and had to give up. But they persevered and tried again, and this time they triumphed. Though this was more of a “fun” event for Bhakti, it came with the important lesson that winning was not about how often you failed but about the spirit of not giving up. 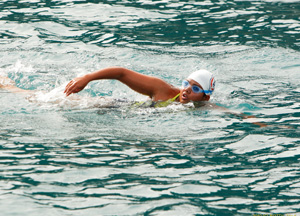 Conquering the Seven Seas
It was around this time that she got to hear of Bula Choudhury [of Bengal], who holds the distinction of being the first woman to swim the ‘Seven Seas’ (an idiomatic expression meaning all the world’s oceans). Inspired, Bhakti chose parts of different oceans, so as to cover all the five oceans of the world. These conquests came one by one, each bringing its wealth of experiences which Bhakti cherishes.
“Arabian Sea was murky and warm”, she says, but closest to her heart, as it was her first ocean experience. The English Channel was tricky, unpredictable and challenging and “more of a mental test”, she continues; the Strait of Gibraltar was “rough, with currents coming from all directions” and shark infested as well, where sometimes she swam with pilot whales and dolphins; the Arctic Ocean was “cold, but a beautiful experience”; and the Antarctica, “truly majestic and the best experience of all”, where she swam with a penguin—the happiest moment of her life.
These apart, she also swam in the Gulf of Mexico (25 km) as a part of the 2007 USA Swimming Open Water Championships; completed a 6.5 km swim around the Rock (Alcatraz Island) in the Pacific Ocean; and won a gold medal in a marathon swim around the Key West Island in Atlantic Ocean. These feats made her the first Asian swimmer to participate in three major American swimming events.
However, Antarctica, the last of her exploits, particularly remains etched in her mind [where she swam 2.3 km in 41.14 minutes, in icy cold waters (1°C), bettering previous record holders Lynne Cox of USA and Lewis Pugh of Britain.] “The training was gruelling, the logistics were hard to manage and sponsorship a far cry,” Bhakti says. “But where there is a will, God creates a way: Hindustan Zinc Limited agreed to sponsor me, and I made my will stronger.”
“It was the most difficult journey of my life,” Bhakti continues. As for her mother, she remembers having been more anxious and concerned about her daughter not succumbing to hypothermia than feeling elated about the records she had just created. 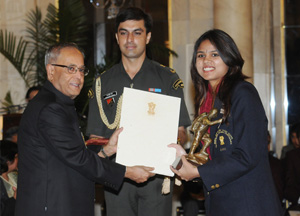 The right strokes
Given her long list of achievements, the number of honours and accolades that have been heaped upon Bhakti are more than one can remember. The most noteworthy of these is the Tenzing Norgay National Adventure Award that was bestowed upon her in 2012 for Water Sports by Pranab Mukherjee, President of India.
Looking back at it all, Bhakti ascribes her successes to rigorous training and hard work, but also acknowledges her mother’s indispensable role as her “coach, manager, researcher and everything else”. She also appreciates the support extended by her school and friends. But there are more accolades to be won, and it is with these in mind that Bhakti continues to buffet the open waters, as she prepares for the 2020 Summer Olympics, hoping to do both herself and her nation proud again.