Her mane may be white, her visage may be frail and she may be holding a stick while walking; but if you take what is apparent for the whole truth, you would land up misjudging Bimla Poddar gravely; for this to-be-octogenarian radiates a spirit that defies age and rages strong at 79. As we sit under the shade of a bougainvillea at her South Kolkata bungalow, she takes me through the remarkable contours of her life in a most matter-of-fact way, ascribing it all to nothing more than a celestial conspiracy.
Born in Chirawa, a small town in Jhunjhunu district of Rajasthan, in a traditional Marwari family, Bimla grew up in a colonised India, amidst cries of Inquilab Zindabad and recalls participating in prabhat pheries (early morning rounds) without understanding their significance back then. She would also watch her mother, Ginni Bai, fastidiously perform homely rituals such as watering the tulsi plant and offering water to the sun in the early hours of the day (surya arakh). Thanks to an early calling for music, Bimla was taught to sing traditional wedding and devotional songs using a harmonium. Armed with these initial impressions, she wound her way to Calcutta [now Kolkata] where she tied the nuptial knot with Bimal Poddar when she was 13.
In her new home, Bimla got busy discharging her duties as a young bride in a joint family of three brothers, under the watchful eye of her father-in-law, the Late Janki Prasad Poddar, who she remembers reverentially. It was here that her interest in music found greater exposure. 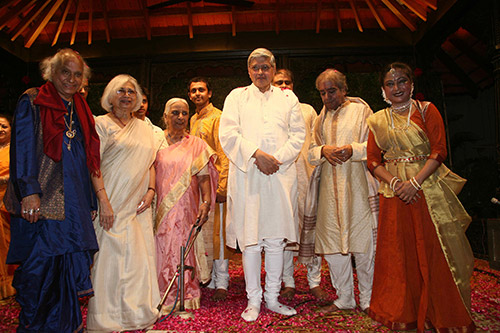 “We would often attend live Indian classical music concerts. I learned the sitar for several years, under the celebrated sitarist Kalyani Roy. I had to give it up due to shoulder pain but continued my exploration in music by learning Rabindra Sangeet. A great stroke of luck brought me close to classical exponent Girija Devi, who accepted me as her disciple; and our bond has blossomed and strengthened over the years. My curiosity in art developed, thanks to my brother-in-law, Suresh, who was a collector of antique items and would bring home all kinds of artefcts, which I gradually learnt to take care of, appreciate and understand,” she says.
Perhaps, it was this atmosphere that helped her overcome the grief and pain of losing her husband when she was 32. “At that time, my father-in-law offered to get me remarried as he would his own daughter, but I declined, knowing it would be very hard for me to accept another family. This family had showered love upon me and had never discriminated between daughters and daughters-in-law.”
In 1996, when Bimla turned 60, she decided it was time for her to spend the rest of her years away from the bustling city life. “Kashi, being the cradle of Indian culture and civilisation, was my natural choice, as it would also allow me to be near Maa Ganga. What transpired though is another story,” she smiles. Upon getting her dream home on Samne Ghat, she started interacting with Kashi’s community, discussing art and other subjects and a barrage of suggestions flowed in. Her brother-in-law, the late Suresh Neotia, was against letting her vegetate. After much musing, a germ of an idea was born. They would set up a Centre for Cultural Studies and call it Jnana Pravaha. The construction was tedious due to a very challenging site and the take off slow, until Bimla requested the late Dr R C Sharma, who had just retired as the director of Bharat Kala Bhavan, Varanasi, to take charge of the institute. He agreed under the condition that he would not be paid a single penny for the (honorary) role. 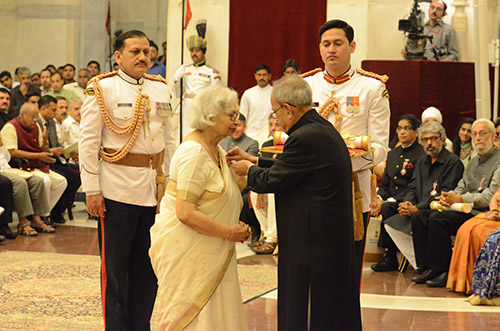 “There was no stopping the pravaha of jnana or the flow of knowledge after he became the acharya,” says Krishna Neotia, Bimla’s sister in-law, who joins the conversation. Over the last two decades, Jnana Pravaha has held national and international lectures and seminars, courses, workshops and concerts. It offers a scholar-in-residence programme, a rich museum and library of art and a talent pool of ateliers. The campus offers spacious flora-filled lawns with a majestic view of the Ganges and a separate Yajnashala, where the holy fire or the ‘prajwalit agni’ has stayed lit since the year 2000, despite rain and storm. The drama group of the institute has presented ‘Karnabharam’, a Sanskrit play, at the World Sanskrit Conference 2015, in Thailand.
As the managing trustee of Jnana Pravaha, Bimla Poddar was conferred the Padma Shri Award earlier this year. But, just as her other accomplishments, she’s quick to shrug this one off too. “My bags are packed and I’m ready to depart, whenever the final call comes,” she offers lightly. But wouldn’t her departure affect the future of her beloved Jnana Pravaha? “Not at all. It is Baba Vishwanatha who has brought it this far and he will take it further,” she smiles.

And they lived happily ever after…