As a 12-year-old vacationing in Mumbai, Aryan was curious about the 3x3x3 Rubik’s Cube that his cousin Aryaman was trying to solve. Soon Aryan took over and after referring to a YouTube video, was able to crack the algorithms and solve the cube in two hours. When Aryan went back to school in New York, he witnessed another student solving the Rubik’s Cube in approximately 30 seconds. This fired him up and he spent days relentlessly practising the cube, determined to beat his friend. A month later, Aryan was able to solve the Rubik’s Cube much faster. It is during this time that he discovered his passion for speedcubing.

Aryan played his first tournament at Harvard University in 2013. During the Harvard Fall 2013 competition, the 13-year-old met other Rubik’s Cube buffs, sharing everything from tips and strategies to thought processes and techniques with them, which gave him a sense of belonging. Today, he cannot stop praising the speedcubing community and how supportive it has been.

During his first year of speedcubing competitions, Aryan travelled to India also for the Indian Nationals 2014 and won the gold in the 5x5x5, 6x6x6 and 7x7x7 cube categories. His strategy of focusing on the bigger cubes had paid off.

The initial reactions to Aryan’s prowess for speedcubing were varied. Some likened it to the ‘law of diminishing returns’, while others felt that playing with a plastic toy “wasn’t going to take Aryan far”. But luckily for Aryan, both his parents—Rahul and Rachna Kejriwal—were incredibly supportive and took a keen interest in his endeavours. They bought him the latest Rubik’s Cubes, other twisty puzzles and also worked around their schedules to take him for competitions.

So what does the whiz-kid have to say about mastering this brain-teasing sport that can frustrate even the most intelligent? He replies, “With the 2x2x2 and 3x3x3 cubes, it’s more about quick pattern recognition and fast turning. But with the 7x7x7 cube, you need to be creative and find efficient solutions that cut your move count down at every stage. The key here is to stare at the cube for hours on end and try to find better solutions—a lot like solving a challenging mathematics problem.” 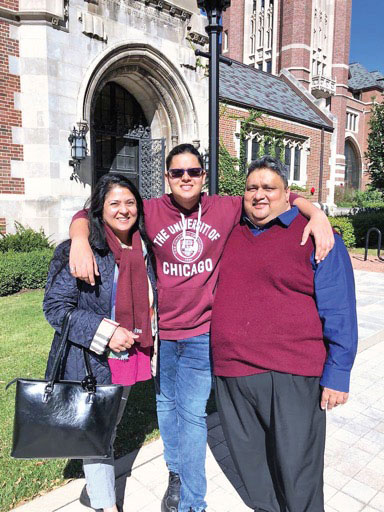 Aryan Kejriwal (centre) with his parents

Currently an undergraduate student at the University of Chicago, Aryan is pursuing a triple major in Mathematics, Economics and Statistics and plans to pursue a career in Quantitative Finance. He adds, “I remember my college admissions officer sharing that my achievements in speedsolving the Rubik’s Cube stood out in my application and this was largely why I was admitted to UChicago. My biggest wish, therefore, is that just like my amazing parents, other parents should encourage their children to pursue their passion, even if it is unusual.”

In mid-2019 Aryan signed a sponsorship deal with TheCubicle, a leading New York-based online speed cube and puzzle store. They provide him with top-notch competitive puzzles— including those that are yet to be released in the market—and Aryan promotes their brand in return. Additionally, TheCubicle has appointed him as their lead coach for big cubes.