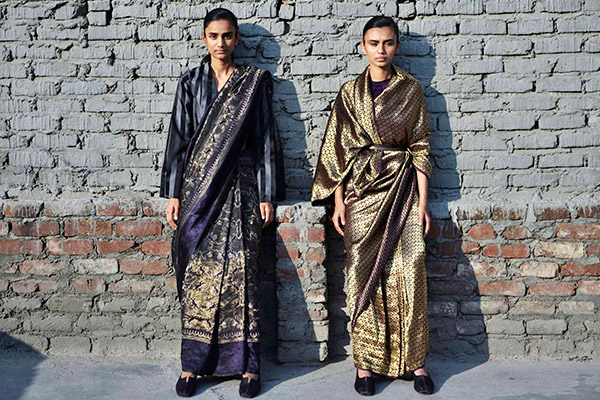 Raw Mango, the brainchild of designer Sanjay Garg was born out of a thought to relook fashion and design without any fixed notions. Born and brought up in Rajasthan, Garg found the roots for his designs in Indian philosophy and traditions, but he has always tried to break the boundaries of convention through his ideas and design.

SANJAY GARG WAS BORN AND RAISED IN A SMALL VILLAGE called Mubarikpur in Rajasthan. He studied in a Hindi-medium school because there wasn’t an English-medium school in his village. His frequent trips to the city of Jaipur brought on the realisation that he wanted to see more and learn more. This pushed him to complete his education from Jaipur. He then joined the Indian Institute of Crafts & Design, where he studied for a year. In the meantime, he got through the National Institute of Fashion Technology and moved there.

Garg’s journey with Raw Mango started about eight-and-a-half years ago. Before founding the brand in 2009, he worked for Shades of India for a few years. This was followed by a stint at the Ministry of Textiles, where he worked on a cluster development programme in Madhya Pradesh. This proved to be a turning point in his life. He decided to continue working with the weavers associated with the programme even after the project was terminated. This home-grown simplicity would eventually become the ethos of his brand.

Rooted in tradition
With Raw Mango, Garg has not only brought about a design revolution but has also managed to uplift an entire community by creating value for an existing but ignored product–the handloom sari.
“Though the handloom sari is worn by many women in India, the perception is that it has little scope in terms of innovation. We have adapted traditional designs to make them simple, sophisticated and distinctly contemporary, thereby creating a fresh new aesthetic that is both indigenous and modern,” explains Garg. Naturally then, over time, the brand Raw Mango has come to be identified with uniqueness, beauty and celebrating imperfections.

The saris, fabrics and stoles of the brand reflect the skills of the more than 450 craftspeople employed by them. They are also influenced by local crafts. It has always been Garg’s mission to bring a fair share of attention and accolade to India’s weavers and craftsmen, who are the backbone of his creations.
His latest collection, which was showcased as the closing show of the opening day of Lakme Fashion Week Winter/Festive 2017, was a celebration of purity, craftsmanship and textiles. The collection, which sought inspiration from celestial beings, was unveiled at the exquisite Royal Opera House in Mumbai.

It featured soft feathers and scalloped clouds of angels in flight, which were made in handcrafted chikankari on Bengal mul, zardozi, adding a spiritual aura to the whole collection. This was also the first time the designer worked on a chikankari collection.

Aesthetically Indian
Everything about the Raw Mango brand, from the product to the photography to how they present the craft, is earthy yet mystical. When asked how he maintains this outlook, the designer attributes his designs to his native influences. He says, “The fashion media today believes in referencing international markets to create trends. I draw inspiration and visual references from our very own India. It is a challenge, but that is what makes Raw Mango unique.” The designer says that though he has broadened his thought process over the years, his connection to his roots and visual sensibilities remain unaltered. He holds the power of visualisation close to his heart and empowers his creations with neat aesthetics.

Garg feels the idea of visuals and aesthetics go hand in hand. They cannot be separated as individual entities, but they are symbiotically inclined to each other at the same time. He is also of the belief that a diligent craftsman needs both to perfect his art! “I create my own references and visual imagery for my collections. I believe that inspiration needs to come from our roots, not from the West. Also, my love for history and culture encourages authenticity and versatility in my designs,” states the designer, while describing the philosophies and intricacies related to his brand.

Craft at the soul
Sanjay Garg’s surroundings have not only shaped his aesthetic tastes, but have also helped him understand the value and worth of the people “behind the scenes”.

“I think of the weavers and artisans involved with my brand process as the soul of my design. They breathe life to my creations. Every piece in my collection is a labour of their love, patience and creative depth,” he adds.

When asked about that one comment or recognition that he holds closest to his heart, he says, “The fact that the younger generation has started wearing saris is a reward by itself. That is the recognition closest to my heart. When I started Raw Mango, I was often told that my collections would not do well because there’s no embroidery on any garment. Watching the millennials appreciate my craft is a true achievement.”

The designer has many fond memories of Rajasthan. “It’s where I am from. My favourite foods, gallis and sense of family all come from my growing up years in Mubarikpur. Like the name suggests, Raw Mango speaks of the unripe and imperfect idea of beauty. It embodies my vision and journey in India and also my village in Rajasthan. From the culture, food and music to its colours and textiles, my village is an integral part of Raw Mango,” he says. Incidentally, Garg states that he had many professions in his mind while he was growing up and wanted to do so many things. He adds, “I would have loved to work with the Archaeological Survey of India or even become a gardener.”

But we are more than grateful that he chose to design instead and are more than lucky to have a spirited soul like him finding beauty in every imperfection through his design aesthetics. To put it in his words, “It will be too early to sum up my journey as I feel this is just the beginning. I feel like I have just started my life. And Raw Mango is certainly a splendid extension of me”.