The corporate world has never been funny business. And yet, Vikram Poddar toes the line by integrating comedy in the way corporates connect with each other.

STAND-UP COMEDY IS INCREASINGLY COMING to be a social commentary and reflection of the times we live in-a humorous portrayal of what’s happening in this crazy world of ours at the moment. In a country as artistically diverse and rich as ours, few, surprisingly, have successfully mastered the art of stand-up comedy. In recent years, however, there has been a phenomenal rise in its popularity, and with the gradual penetration of digital platforms into people’s lives and homes, stand-up comedy has succeeded in winning over mainstream acceptance. Since the times of Dilbert—a popular American comic strip written and illustrated by Scott Adams, known for its satirical office humour—there haven’t been many who have dabbled in this risky vocation, an exception being Vikram Poddar, a stalwart who stands apart from the rest in a selfcarved, previously unheard of niche: corporate comedy. 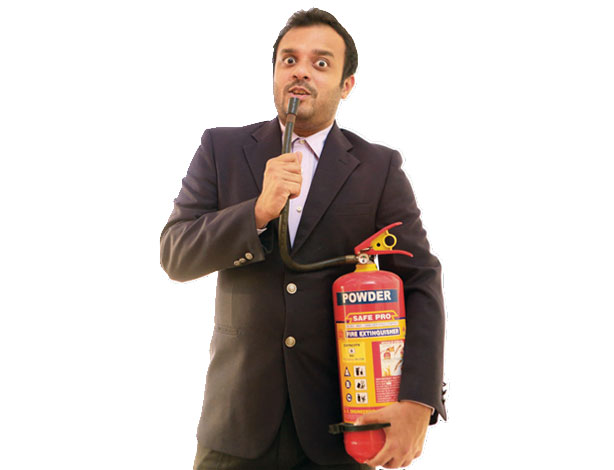 Brought up in a family of exceptionally liberal values, Poddar attributes his upbringing to inculcations from a father who came up through intense struggles and a mother who was brought up in the erudite and self-accomplished household of the Roongtas. The oldest of 13 siblings from a small village called Dhunlod in Jhunjhunu, Poddar’s father, through personal initiative and merit, went on to study at BITS Pilani and IIM Ahmedabad. Poddar says, “He was a man ahead of his time, having launched the first fax machines in India, the first to introduce FCNR bonds to NRIs and also one of the earliest members of the NSE. We lost him to renal failure in 2015, but his values of honesty, integrity and hard work continue to resonate with my work ethic as well.”

He continues, “My mother, till date, remains my source of emotional strength and, well, pretty much everything. Being well informed about current events and quite knowledgeable, she often resorts to advising me on my comedy bits, as well as counselling my brotherin- law on his start-up models. My brother-in-law is my strongest supporter and mentor for all things personal and professional. And my sister is the glue that holds the family together, taking care of both the clueless men who might drown in their own socks and my mother.”

An MBA, Poddar began his professional journey as an investment banker. The tipping point in his life came about when he was handed the pink slip in 2009. With ample time to reflect on his career choices, he went on to reignite his interest in public speaking and joined Toastmasters, an educational organisation that operates clubs worldwide to promote communication and public speaking skills. Poddar elaborates, “In 2011, a series of events like winning the Toastmasters Humorous Speech Contest at the national level, winning Vir Das’s Open Mic contest and The Comedy Store Open Mic all came together. Over a period of time, comedy combined with my past experience to morph me into India’s first corporate comedian.”

The Business Of Comedy

BoredRoom Comedy came into existence in 2013, with a truly unique selling proposition: leveraging appropriate and relevant comedy to transform ‘bored’ rooms across business disciplines, viz, learning and development, employee engagement and motivation and marketing. Explaining the essence of BoredRoom Comedy, Poddar says, “We are a team of MBAs and CAs who have worked in the corporate sector for many years. We are a start-up that aims at making corporate engagements slightly humorous, fun and a little unorthodox than the standard boring corporate templates. We believe we can fundamentally transform the way employees, clients and all stakeholders engage, learn and connect.”

Today, Poddar has more access to top managements as a comedian than he did as an investment banker. “Don’t be surprised if a deal happens and BoredRoom Comedy is listed as the advisor to the transaction,” he jokes.

Poddar’s experience of working in corporate circles has helped him understand his audience better. He’s learnt that content can slip easily from comedy to crass, and that makes his work feel like a tightrope walk. He conveys, “Our deep knowledge, acquired from past corporate experiences and through comedy gigs, means we know exactly where the line is. We have been told that we know exactly how to push the line to make it funny and engaging, yet not cross over into uncomfortable territory.”

Recounting multiple marquee clients across sectors, like Nomura, Vodafone, Aditya Birla, Mondelez, Unilever, Motilal Oswal, The Economic Times and others, Poddar pauses for a moment to mention his most remarkable event—the very first edition of ‘The Economic Times Startup Awards’. He states, “ET trusted us to host the event with comedy despite luminaries like Evan Spiegel (Snapchat Founder & CEO), Kunal Bahl (Snapdeal Founder & CEO) and Pete Lau (OnePlus Founder & CEO) being present in the crowd. To have the opportunity to crack jokes on such people on live TV was unprecedented.” 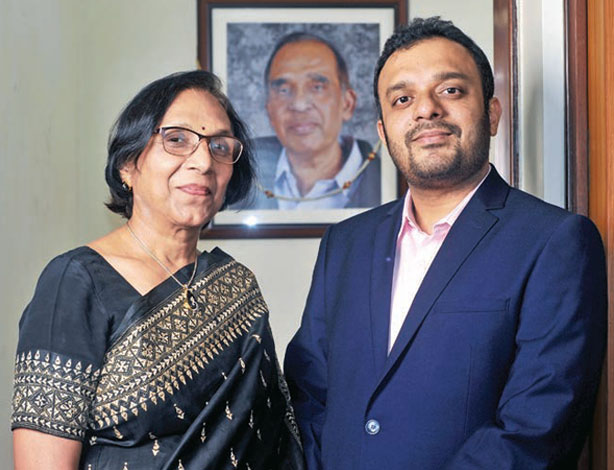 Vikram Poddar posing with his mother, with the picture of his late father in the background

Over the years, BoredRoom Comedy has grown from doing unique corporate comedy shows to workshops to humorous storytelling in the B2B space. Talking about future plans, Poddar reveals, “We are now looking to actively engage comedians and other artists across platforms to leverage their art for boardroom goals. We are the bridges who understand both comedy and corporate— two elements that traditionally have struggled to work with each other.”

start-up ecosystem, an increasing number of companies are showing interest in the sector. Ratifying its potential, Poddar says, “I see huge potential and growth in this sector. The growth of OTT platforms like Netflix, Amazon, etc, is ushering in unprecedented avenues and a whole new set of audiences. We are engaged in creating content in our unique voice for these platforms also.”

Setting goals for BoredRoom Comedy, Poddar says, “My goal is to become one of the premier entertainment companies in India—to be the TVF of corporate comedy in terms of production and the foremost provider of engagement and learning solutions using comedy globally.”

With changing perceptions and viability of comedy, not to mention the lure of fame and money, Poddar feels it necessary to both encourage and caution young talent. “As a start-up entrepreneur and a corporate stand-up comedian, I want to tell budding artists to have the courage to follow their dreams. However, newcomers need to realize YouTube fame is neither a necessity nor a sufficient condition for success. Having a unique proposition and voice is critical to sustain in the long run,” he advises.