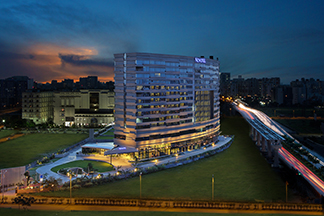 Novotel Kolkata, winner of the Best Debut and Best Design and Architecture Award for 2014, symbolises the growth trajectory that the Salarpuria Sattva Group has achieved in just two-and-a-half decades, and the rise of Apurva Salarpuria, the dynamic scion of the prolific real estate company, to whom the prestigious award is due. Young and raring to go, the 34-year-old plans to take the group to newer heights as the man at the helm of the Kolkata wing of the business.
The Salarpurias’ journey to fame and fortune began over three generations ago, when they left their home in Thoi, a little-known village in Rajasthan’s Sikar district, to resettle in Calcutta (now Kolkata), the then alpha city of the country. Starting out with a chartered accountancy firm, the family has since achieved many milestones, carving a niche for itself in the country’s luxury real estate sector and diversifying into the premium hospitality sector, apart from other achievements.

Laying foundations
It all began with patriarch G D Salarpuria’s foresight and early successes as a businessman, whom grandson Apurva Salarpuria, the executive director of the Salarpuria Sattva Group, holds in high regard. “My grandfather was one of the most enterprising men that I have ever come across,” he says, taking us back to those years when G D Salarpuria, buoyant with the success of his chartered accountancy firm, forayed into the real estate sector, choosing Bangalore (now Bengaluru), the fastest growing city then, to try his luck. “In the early nineties, he had identified the real estate sector as an area of great opportunity and had the foresight to predict the development of Bangalore into the silicon valley of India that it is now. To pursue this dream, he set up base in Bangalore.”

Pan-India presence
The rest, as they say, is history. Even though the Salarpurias were rank outsiders in Bangalore, with G D Salarpuria’s guidance, coupled with Rakesh Salarpuria and Bijay Agarwal’s hard work—Rakesh Salarpuria is Apurva’s late father and Bijay Agarwal is his uncle—their newly established business soon found its footing in the city and then quickly grew into one of the most reputable real estate firms. Part of this success, of course, had to do with the information technology boom of the nineties that transformed Bangalore into the country’s main IT hub.
Spurred on by the Bangalore success, over the last 10 years, the Salarpurias have extended their footprint to other cities and branch offices came up one by one in Kolkata, Bangalore, Hyderabad, Pune, Vizag, Coimbatore, Jaipur and Durgapur. The group’s forte was large IT parks and premium residential projects, with an impressive clientele (including the likes of Microsoft, Intel, Hewlett Packard, Motorola, Infosys, etc) sending the group’s reputation soaring.

A greenhorn
Apurva Salarpuria in the meanwhile was preparing himself in Bangalore to make his entry into the family business. This ultimately happened around 2005. “I had been training since 2001 and formally entered the family business in 2005. With my chartered accountancy background [he has a CA qualification and a stint at the international accountancy firm, KPMG], the initial work assigned to me was around the legal and financial aspects of exploiting the just opened FDI market in India. So, initially I was interacting with a lot of private equity funds and lawyers,” says Apurva, recalling his preparatory days.

A possible venture that emerged as being viable to him was joining hands with the Accor Group, a French hotel management chain that at the time was looking to strengthen its presence in India by promoting its Novotel brand aggressively. Seizing the opportunity, he signed up for a Novotel hotel in Kolkata, after a quick round of negotiations with the Accor management. The terms of the agreement were that the Salarpurias would build the hotel, but the operations would be managed by Accor India.

To get working on the new project, Apurva moved to Kolkata in 2008. The job he had in hand was to build a 340-room property and simultaneously set up a presence for the Salarpuria Sattva Group in Kolkata. A greenhorn that he was, and considering that this was the very first hotel that the group was building, the job wasn’t easy. Reminiscing, Apurva says, “The construction of a hotel is probably the most complex form of real estate development alongside hospitals. Being outsiders to the hospitality industry, it was a mammoth task for us to construct the huge hotel as our first venture. However, now that it’s done, I can say it has been a personally rewarding experience.”

Novotel Kolkata Hotel and Residences, as the property is called, opened its doors in September 2014. As eastern India’s largest hotel (in terms of the number of keys), it boasts the largest number of meeting rooms and conference facilities, including the city’s largest rooftop venue, which can host in excess of 1,000 guests. The hotel also houses Kolkata’s first branded serviced apartments for long stay guests. In addition, it enjoys great locational advantage, New Town being one of the city’s best planned areas with the city’s IT hub and the airport close by. 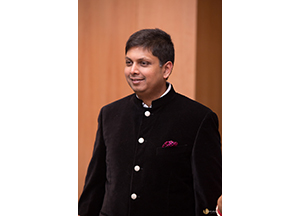 A seasoned entrepreneur
After the success of Novotel, Apurva now manages the group’s operations in eastern India and also the group’s hospitality vertical. To cash in on the experience gained, he handles several high-end standalone restaurants and F&B outlets in Kolkata, including Amigos, a Tex-Mex restaurant, and ‘Villa 19’, a European café. Apart from this, he is an investor and a director at Spring Leaf Retail Pvt Ltd, a company which runs about 65 outlets of ‘Mast Kalandar’ chain of restaurants in India. He is also involved in nurturing start-ups as an angel investor, through platforms such as Calcutta Angels (which he has co-founded) and Bangalore Angels.

What next?
Apurva’s future seems intertwined with Kolkata, or at least in the foreseeable future. Though the city may not measure up to some of its more prosperous cousins, it’s a city which he and his wife, Devina, and twins, Vidhika and Avyaan, call home and about which he feels very positive in view of the present government’s initiatives to promote the state as an ideal investment destination. To add to it, given his dedication to scale greater heights and the Salarpuria Sattva Group’s reputation, the best perhaps is yet to come for the Salarpurias.