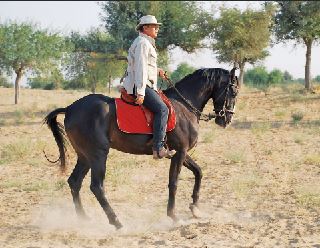 Once thought to be endangered, the Marwari horse, which is an integral part of the cultural heritage of Rajasthan,
has surprised all by its improbable comeback. MARWAR offers insight into what makes this particular breed special and why a growing community of equine enthusiasts is rooting for it. 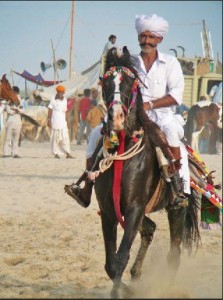 The history of the Rajputana was written on its back. Legendary warriors such as Maharana Pratap went to war on spirited horses that belonged to this breed. Over time, its loyalty, gait, stamina and valour on the battlefield made the Marwari (horse) one of India’s most sought-after equine breeds. Then the British arrived and it slowly lost favour in the royal cavalry and stables. Its numbers dwindled. But the hardy breed was not one to disappear without a fight. With the help of national and international organisations, a few royals and stud farms that mushroomed across India—all of which have been working towards its welfare—it has managed to make a comeback.

“The Marwari horse is beautiful, graceful, charismatic, loyal and fearless. The cultural heritage of Rajasthan is connected with this breed. To understand its history, one must understand the history of India and the millennia of invasions, occupations and influences, all the while bearing in mind that those invaders were also mounted on their best horses,” says Francesca Kelly, founder and overseas director of the Indigenous Horse Society of India (IHSI). 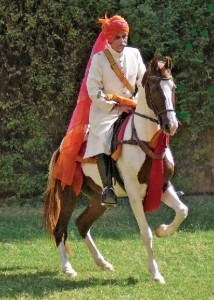 The highs and the lows

What makes the Marwari special is that it is the only breed, apart from the Kathiawari, to have the signature curly touching ears. They rotate 180 degrees and touch at the tip. The horse is acknowledged to be sharp, intelligent, spirited and athletic and is known for its build and stamina.

Though it is difficult to trace the origins of the breed, the Marwari was found in the stables of rulers of several former princely states in pre-British India. The erstwhile states of Marwar and Mewar were probably home to the most famous of them—Maharana Pratap’s Chetak and Amar Singh Rathore’s Udal being notable examples. The royals and nobles of these two states were great patrons of this breed and mounted their respective cavaliers on it.

“The horse flourished in the dry climes of Rajasthan and evolved into one of the finest equine specimens, with striking features, a fine coat, hardy limbs and a tolerance to the harsh summer heat. Due to its great burst of speed, it became a war horse for the Rajput warrior heading into battle,” says Thakur Sidharth Singh of Rohet Garh in Rajasthan, who is one of the founding members of the All India Marwari Horse Society (AIMHS). The house of Rohet has been a patron of this breed for many generations and has one of the top stables for the Marwari in the country today.

Its decline began during the days of the Raj. This was when most of the Indian cavalry was mounted on Australian Walers and the British Thoroughbreds. However, even at the time, the breed was still kept alive by the royal houses and the nobility. Bloodlines were maintained. “As fate would have it, the Marwari was hit hard after Independence, mostly due to abolition of the Privy Purse and the Jagirdari system,” says Raghuvendra Singh Dundlod, founder secretary general of IHSI. This was when the Indian aristocracy had to give up their estates and began losing their income from lands and titles. They could no longer afford to have large stables for horses.

They sold their stock and the breed fell into the wrong hands. Bloodlines got diluted and a steady degeneration in stock began due to lack of knowledge in equine management. The Marwari horse was thought to be endangered.

Over time, individuals, organisations and royals got involved to save the breed from possible extinction. The most notable among them are the
IHSI and the AIMHS. “Among the royals, Sriji Arvind Singh Mewar of Udaipur, Maharaja Gaj Singh of Jodhpur and the former maharajas of Danta Bhavangadh and Wankaner are still associated with the breeding of Marwari and Kathiawari horses,”
adds Dundlod.

Slowly but surely, the Marwari made a comeback. Today, it is found across Rajasthan. As per a state government census, the largest number of these horses can be found in the Shekhawati region. They are also spread across the region of Marwar and can be found in the states of Punjab, Uttar Pradesh, Haryana, Maharashtra, Gujarat and even in some parts of South India. 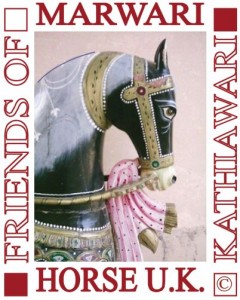 Outside India, it has flourished in the US, on the island of Martha’s Vineyard and can also be found in Spain and France. However, as export is now banned, the present owners of Marwari horses overseas are finding it challenging to infuse new genes into their breeding programmes.

Back home, stud farms have contributed immensely to the successful breeding and improvement of the Marwari bloodline. Thanks to proper knowledge of the breed and management, the new generation is a greatly improved specimen. “With the rise of social media and the advent of the Internet, now the whole world can know about the Marwari from their living rooms or on their smartphones. No longer is the knowledge of horsemanship restricted to the educated or royal classes. Anyone can now read up on care, breeding and riding techniques and seek advice on forums to further their equine understanding,” says Caroline Moorey, Chair, Friends of Marwari/Kathiawari Horse, UK.

Changing with the times

According to experts, the Marwari has much potential for all equestrian disciplines, including jumping, dressage, cross-country, tent pegging and skill at arms. Currently, however, it is primarily used as a safari horse in India, earning its keep by giving visitors from all over the world a chance to discover Rajasthan on horseback and understanding its importance to the state’s culture and tradition. “At times, the Marwari is also used for police patrolling and in weddings and religious processions, etc. You can’t have a better horse than the Marwari with its intelligence, surefootedness and loyalty to its master. The breed is very closely associated with Rajasthani history,” says Mahipendra Singh, the present Maharana Saheb of Danta Bhavangadh in Rajasthan.

Over time, its popularity has also led breeders to experiment and introduce other breeds into the bloodline, either to produce another equine ‘type’ (ie, sports horse or vanity horse), or to eliminate defects or known weaknesses. And while experts agree that this is acceptable in a controlled manner, they warn that it could wipe out the indigenous breed entirely if adequate precautions are
not put in place.

Experts also feel that India can do more for the welfare of this breed—privately, locally, regionally, nationally and at the government level. They feel that one can learn from countries that have succeeded in producing good foundation stock, a universal breed standard, a respected stud book system, a premium stallion scheme, a progeny scheme and good show and training infrastructure—all to promote a breed in its best form.

But that does not seem to be happening, at least at the moment. “Today, the biggest challenge for someone who is breeding the horse is where to sell it. Only big stud farms and a handful of prominent breeders sell for a good price. The ban on the export of indigenous horses has closed many stud farms and sales have dropped at fairs. The central and state governments should have a clear policy on export, promotion for sports utility and for the creation of government stud farms. They should also offer financial grants for horse shows and for participation at international shows,” says Kelly.

In the end, the future of the Marwari could well be in the hands of the few who have the breed’s best interests at heart. “We believe the breed has a great future in the right hands. Alternatively, it is also in the hands of those who just see a ‘quick buck’ for the latest trend—who have no conception that their ego, mismanagement and ill-conceived interference could lead to the breed’s extinction—or that it could follow other breeds that have been bred to be so far from their origin that they are unrecognisable,” says Moorey. One can only hope it isn’t the case. For now at least, the breed is riding high on its return.

Know more
The Indigenous Horse Society of India is the first registered NGO to highlight the past, present and future well-being of the country’s most prominent horse breeds, of which the Marwari and Kathiawari are the primary archetypes.

The All India Marwari Horse Society (AIMHS) was founded under the patronage and guidance of Maharaja Gaj Singh II of Jodhpur. The AIMHS has done commendable work in the preservation and promotion of the breed, right from cataloguing its phenotypic characteristics and holding seminars on equine management to the all-important task of starting and maintaining the first-ever stud book for the breed.

By numbers:
In 2007, the central government’s animal census estimated that there were 24,000 Marwari horses in India.

There are approximately 1,200 registered horses in the AIMHS stud book.