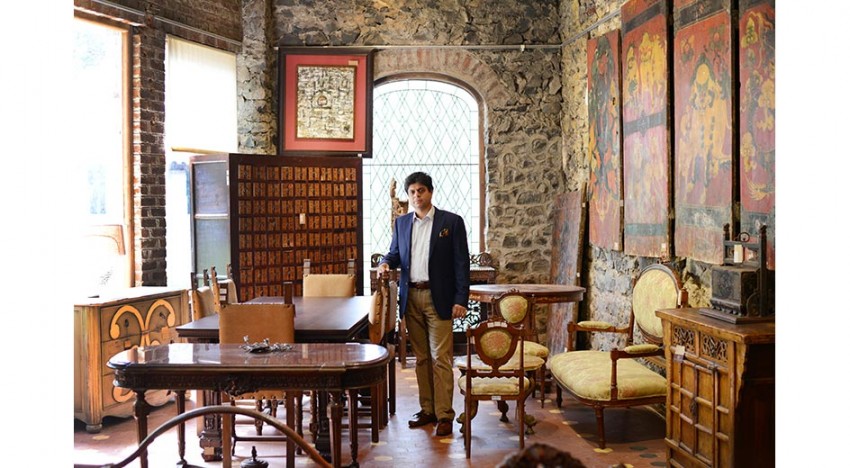 Passing by the 175-year-old, five-acre New Great Eastern Mills, on Ambedkar Road in South Mumbai, there is no way to guess that the lane gives way to a majestic lifestyle store with an expansive display area of 55,000 sq ft, or that a beautiful green pond populated by turtles, fish and swans lies within.

I am outside the Byculla outlet of The Great Eastern Home (which also has an outlet at Vikhroli since last January), the labour of love of 45-year-old Dr Anurag Kanoria, who I am waiting to meet. My curiosity is further stoked by my knowledge of his doctorate in literature and his family’s generational involvement in women’s education in Rajasthan.

I find visual treats strewn everywhere—solid granite communal grinding stones (which are now obsolete) from old Indian villages lie purposefully outside, as does a charming white classical marble jharokha. A thousand questions crowd my mind as I walk past the artfully placed white marble fountains (which take approximately six months to make by hand) and a 150-year-old banyan tree, which serves as a live installation, to the large wooden doors that are open to all.

Inside, the spacious showroom is methodically littered with antique and classical furniture, picked up by Kanoria on travels abroad—from places as diverse as London, Japan, Mozambique, Syria, Canada, Mexico and Bhutan, I hear.

I marvel at an eight-foot-high, gold-leafed, hardwood door from the Qing dynasty (circa 1830). A Buddha statue (below) from the Shan dynasty, circa 1700, is one of the rarest items while an original teak howdah, belonging to The East India Company and running into crores, qualifies as the most expensive. The oldest artefact in the store is a 2,000-year-old terracotta figure from the Han dynasty. Particularly enchanting is a teak ceiling from the Shan dynasty that Kanoria has salvaged from a palace in northern Burma.

As I am served tea on a beautiful wooden dining table, I note that the teacup is part of the collection that decorates the table, and I realise that painstaking effort has gone into ensuring that there is no element jarring the surroundings. Grimacing internally at the lack of a coaster, I gulp down the tea on hearing that Kanoria is waiting for me on the floor below. I start by asking him how the world of décor captured the interest of someone with a doctorate in literature. “I actually have three masters, in English and American literature, economics and aesthetics, the first from Northeastern University (Boston) and the last two from Mumbai University. My PhD was on postmodern literature,” says Kanoria, whose eye for décor caught the eyes of many when he did up his house at Worli years ago. That was when he started decorating the houses of others, friends at first, before it struck him that he could build a business out of it. It was in 1994 that he invested in a furniture business as “a hobby”, but a decade was to pass before he would launch the first Great Eastern Home store in Mumbai.

Having grown up in a family of antique and art collectors, Kanoria had self-admittedly been “obsessed” with interior design and fine furniture since childhood. It was unsurprising that he found his calling in architecture and design, even though it meant moving away from his family businesses, which lay in starkly different areas like textiles and sugar. “It has worked out well after all, as my business sensibilities were well honed in diverse businesses and, over the years, I have been able to yoke it with my passion for the decorative and fine arts,” says he amiably.

I suspect that however good at number crunching he might be, his business is not run by the idea of profiting alone. In fact, he is so emotionally invested in his work that the eloquent Kanoria finds himself momentarily stumped when asked about the time spent on ideating about his brand before the launch of the store 10 years ago. On recovering, he clarifies: “The conception of all this probably started subliminally when I was a very young boy, and if such things are true, then before I was born. As I grew up with all this around me, the training and ingraining of the sensibility happened on its own.”

I walk through the store to find ornate relics from the Qing dynasty mingling with colonial furniture from Canada, Australia and South Africa, and paintings by upcoming artists lying harmoniously with the art deco style of furniture from France and Belgium. “Almost all stores in India deal in Indian colonial furniture from various parts of the country, mainly Bengal and Goa, with architectural features from Rajasthan and Kerala making an appearance now and then. Most collectors have also limited their buying to such things, but I wanted to bring in period furniture from across the world,” he says.

The Great Eastern Home is also known to host a variety of events ranging from informal talks and seminars (which Kanoria, with his vast knowledge of art investment, conservation, history and aesthetics, regularly participates in) to walk-throughs, workshops, art shows and private dinners. Then there are a few hand-picked shows that Kanoria likes curating, too. One of them is The Grand Trunk Show, a tie-up with Taj Khazana. The first show was hosted at the Falaknuma Palace, Hyderabad, before it moved to the two Taj Hotels in Delhi. “The opening show in Hyderabad was probably the biggest high-end furniture show ever held in India. The actual space occupied by the show covered acres of open and covered spaces,” says he. This winter, The Great Eastern Home is hosting the shows at The Taj Mahal Palace in Mumbai before moving on to Chennai and Bengaluru.

We know that Hollywood star Hugh Jackman who stopped by the Byculla outlet in 2009 isn’t the only celebrity to have visited his store, but Kanoria isn’t willing to reveal much except that his client list ranges from wealthy Indian industrialists to international celebrities. “The Great Eastern Home works with diverse clients and I like to blend different periods and styles in my work. Arranging such an interior is like putting together an orchestra. The lifestyle we enjoy today is complex, international, transnational and transhistorical . . .” says he passionately.

I ask him whether our rich Indian heritage has also played a part in his interest in aesthetics. “Definitely, but unfortunately, we do not have enough world-class designers for the upper end of the market. Most of the brilliant work is being done at the grass-roots level. That is the gap that we are interested in filling in,” states he.

Kanoria is economical with his time. Between sourcing, designing, customising, travelling, lecturing, curating, collaborating with specialised studios, conducting workshops and freelancing as an arts and aesthetics advisor, he also finds time to expand his business. His latest fixation is the fledgling brand called Ficus which he has recently launched in Mumbai and Kanpur. “It caters to a younger clientele. It will display more eclectic pieces of furniture and home accessories and be more accessible,” states Kanoria, adding that the next store will open in Bhutan (where he has recently designed interiors for two super-luxury boutique hotels), by January 2015. Side-by-side, Kanoria is in the process of taking The Great Eastern Home to Kazakhstan, Dubai, Moscow, London and Paris, with at least the first two projects coming to fruition as early as 2015.

After the interview, I lose myself in the beautiful museum-like rooms, stopping to gaze upon a relic of classical antiquity every now and then, but admiring it all indiscriminately. An exquisitely embroidered cushion cover catches my eye, since I rightly assume that it is one of the few items in the store that I could afford as a memento.