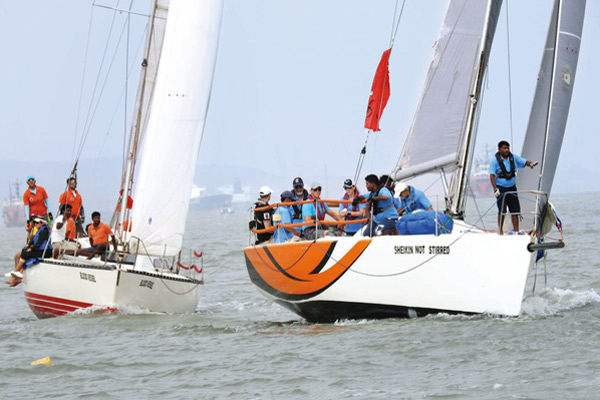 October to April in Mumbai is sailing season. At the end of April, we will celebrate the winner of the Bombay Merchants Cup (BMC) Regatta, where luxury yachts will compete for the much sought-after Gurkha Cigars Trophy.

From October to April, every Saturday afternoon, a collection of India’s leading sailors—world champions and Olympic champions included—partner with some of India’s leading business tycoons to race luxury yachts in Mumbai. The Bombay Merchants Cup Regatta, as the race is called, has two categories of yachts taking part in it—those above 40 feet in length and those below 40 feet. Having been invited by Capt Homi Motivala—an exsailor, yachting coach and Arjuna Award winner—to join him on one of these exhilarating races, here’s bringing you an adrenaline-fuelled account of the event.

Capt Motivala’s yacht is named ‘Tengi’ and competes in the below 40 feet category. It is now 3:20 pm and we are making our way to the starting line, which is just off the Gateway of India. The official starting time of the race is 3:30 pm. There are 18 luxury yachts taking part in the race, and they are all traversing the water near the starting line. Every captain is jockeying for position to be the first to cross the starting line. There is a catch here though. If we cross the line before 3:30 pm, we will be disqualified; if we time the traverse badly, other yachts will get ahead of us, so timing is critical. At one point, it looks as though we are heading THE BEST THE WORLD HAS TO OFFER for a collision with another yacht and my heart skips a beat at the thought of the impending collision, but Capt Motivala nimbly changes the direction of the yacht and we are safe. 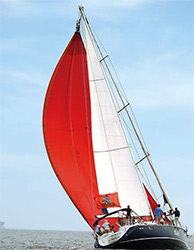 The starter’s gun goes off at 3:30 pm sharp and all yachts change direction from traversing across the starting line to crossing the line. The yachts seem to be dangerously close to each other. There are some tense moments. Capt Motivala’s sailing experience of over 50 years gets us across the line first, and we start to break free from the mass of yachts behind us.

The first leg of the race is against both an outgoing tide and a headwind. I do not understand how a yacht can move forward against two such negative forces so Capt Motivala explains: “When you are sailing into a headwind and outgoing tide, you have to sail at a 45-degree angle into the headwind, and this gives maximum speed going forward.” I am not sure that I still understand how that works, but I see the yacht keeling over at a 45-degree angle, half out of the water, but moving ahead at speed. Being over 90 kg, Capt Motivala requests me to sit on the side of the boat that is out of the water, saying that my weight would help increase our speed, and I dutifully follow. 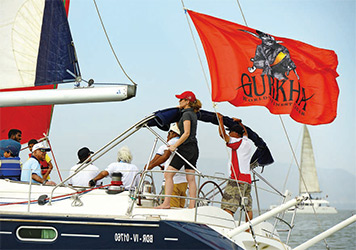 We turn around at the marker near the Gateway of India and head south. We now have the wind and tide in our favour so Capt Motivala instructs his crew to take down the small sail at the front of the yacht and replace it with a huge colourful sail called the spinnaker. This is designed to catch as much of the backwind as possible and propel the boat forward at full speed. We are now a fair distance ahead of the other boats, and when I look back, all I can see is a rainbow of colours in the sea, each yacht having deployed its spinnaker sail. It is quite a beautiful sight.

The race lasts for about two-and-a-half hours. We hear a loud sound that indicates that we have just crossed the finishing line. Going by design, our yacht should have actually been one of the slowest, but Capt Motivala and his team’s sailing skills and experience got us across the finish line first. What a fabulous way to spend a Saturday afternoon!

The finale of the season is the last race of the year, which is typically held at the end of April, or the first week of May, depending on the monsoon. The yachts compete for the Gurkha Cigars Trophy, a much sought-after prize, to celebrate the season’s sailing achievements.