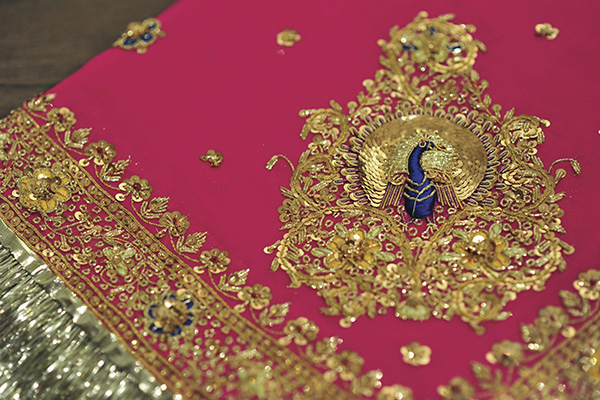 Traditional attires no doubt have a draw of their own, but mix them with exquisite art and a quest for excellence and the result is nothing short of magical. Add a touch of royalty to them and what emerges can hold entire generations transfixed with their mesmeric appeal, as has Mangalmayee’s royal attires for over a century. Gone perhaps are the regalia and the pillars of honour and pride that once characterised Rajput royalty, but in the ateliers of Mangalmayee, the poshaks (Rajasthani four-piece attires for women) and royal vestments that once adorned the queens and princesses of Rajputana are still crafted to replicate their timeless appeal. 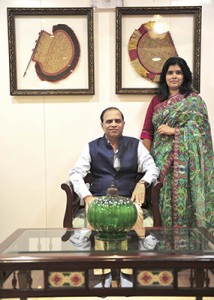 A century-old legacy
Mangalmayee’s tryst with royalty dates back to 1911, when founding father Harakchand Burad started his business of crafting opulent attires for royalty. The business then was called Harakchand Zariwala. Taking us back to the times, Sandeep Burad, the fourth generation of the Burads, who now holds the reins of the business, says, “Harakchand Ji, mesmerised by the royal culture, wanted to contribute and associate with the timeless way of living, and his association with the royal households, understanding of their culture and traditions and close observation of their dressing styles helped him in establishing Harakchand Zariwala.”

Catering exclusively to Rajput royal families and their thikanas (estates of thakurs), the house took its first steps by specialising in poshaks for the women of royal households. The attires were usually intricately embellished by hand, employing the zardozi and aari embroidery techniques. Zardozi and aari crafts (which date back to Mughal times) involve embellishing garments with threads of real gold and silver, diamonds and precious gems, and by employing these techniques together with expert craftsmanship, Harakchand Zariwala created exclusive pieces that made the house popular with the royal families. Thus, what began as a humble business with just 4-5 members of the Burad household, expanded to one with 25 employees within six months! 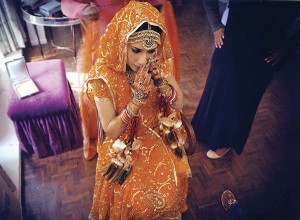 In the meanwhile, thanks to the sustained efforts of the Burads across generations and the close ties they shared with royal families, the family business has grown and flourished. However, it is under the leadership of Sandeep Burad that significant changes and innovations have been brought in. Starting with the name change to Mangalmayee and induction of Sandeep Burad’s wife Sunita (who is a designer herself) into the business, there have been changes with respect to the products and the sales strategy also, including the introduction of design catalogues, shade cards, swatches and design consultation for creation of customised pieces for clients.

Further, under Sandeep Burad, Mangalmayee has forayed into new areas such as restoration of heirloom/antique pieces and introduction of an exclusive range of vibrantly coloured saris that blend the traditional with the modern by embellishing chiffons with original artworks of olden times. Restoration jobs involve carefully extracting original embroideries from heirloom pieces, cleaning them and then transferring them onto new fabric, without changing their essence. Some of the restoration jobs undertaken by Burad include an entire range of poshaks, saris and artefacts for the Royal House of Mewar; restoration of heirloom pieces for Maharani Vinita Singh of Patiala (which were worn by her daughter Princess Ria Rajeshwari Kumari on her wedding day); and old poshaks for the royal family of Jaipur (City Palace); among others.

Blending the old with the new
The introduction of chiffon saris, however, was more in keeping with the changing times and modern preferences. In this area, Sunita Burad has played a significant role, which, of course, was part of her overall efforts to promote and expand Mangalmayee as a brand. Sunita Burad, in fact, also has the launch of an exclusive collection of delicate chiffon sarees embellished with Swarovski crystals to her credit. These innovative streaks led to the inception of her store, Jaipur Pink, in 2007, which later took the shape of a designer souvenir store. In 2010, she was awarded the Women’s Heritage Award by IMC and ASSOCHAM in New Delhi, for her efforts to revive and restore old craftsmanships and textiles.

Amidst all this, Mangalmayee, however, retains its time-honoured reputation of crafting poshaks, hand-dyed saris and Rajasthan saafaas (turbans), which continue to adorn the royalty of Northern India over a century later, including brides at the royal weddings of Jodhpur, Udaipur, Patiala and others. Among its noteworthy clients include Maharaja Arvind Singhji Mewar of Udaipur, Maharani Padmini Devi of Jaipur, Princess Diya Kumari of Jaipur, Dr Swati Piramal, the vice chairperson of Piramal Enterprises and Gautam Adani, the chairman of the Adani Group, to name a few. With changing times, real gold and silver may have been largely replaced by threads of silk and copper and ornaments by sitaaras, sequins and beads, but the detailing and painstaking craftsmanship remain the same. 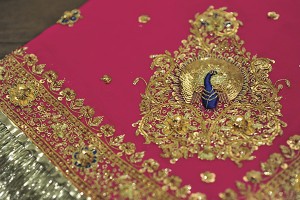 Sandeep Burad explains the elaborate process: “The journey of a poshak starts from the studio after careful consultation with the customer. The raw material is procured on the basis of requirement, and after the colour and shade are decided, 8.5 metres of fabric (the usual measurement for a poshak) is sent for hand dyeing. After dyeing, the fabrics come back to the Mangalmayee workshop, where they are cut into kalis [vertical panels of cloth that gives a lehenga its flare], and these kalis are stitched together to form the outline of a lehenga. The stitched outline is then embellished with embroideries of aari, zardozi, gotta patti or danka. Each of these embroideries and the sequin and sitara embellishments call for extreme hard work and focus. These sophisticated works finally translate into one-of-a-kind, handcrafted bespoke poshaks, in about 45 to 60 days.”

Preserving heritage
Considering that the entire process calls for a high degree of specialisation and knowledge of rare skills, the brand has been working with the same artisans for generations, a case in point being the family of “Mithu Ji (late Abdul Latif)”, who have been hand-dyeing fabrics for the Burads for
75 years. Mangalmayee, in fact, takes pride in working with and supporting these grass-roots artisans, whose inherited skills and timeless crafts have a cultural and traditional relevance for the Rajput community.

However, given the ever-changing face of fashion, preserving heritage calls for efforts to create awareness and educate customers about the artistry and uniqueness of traditional attires and skills, and this is precisely what the Burads are gearing up for. Also, to stay abreast of changing times, the Burads are contemplating changing existing designs to make their creations more appealing to modern generations. But all this while keeping its century-old legacy intact, with which a true heritage of India continues to live on.