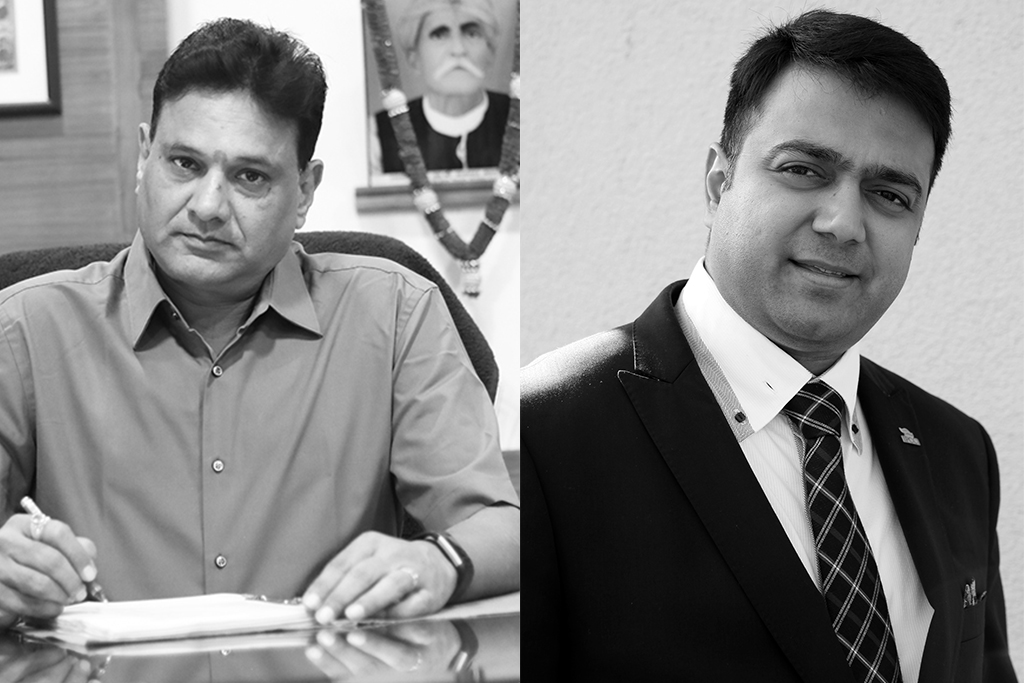 Among the hundreds of textile and yarn manufacturing units that dot the Bhilwara skyline, those of the Sharda Group count among the oldest, having been established in 1926 by the late Gajadhar Mansinghka. Carrying his vision and foresight forward, the group has grown both in scope and size over the decades to command significant presence in yarns and fabrics, thanks especially to its current chairman, Anil Mansinghka, under whose stewardship a great deal of the group’s diversification and growth has taken place. 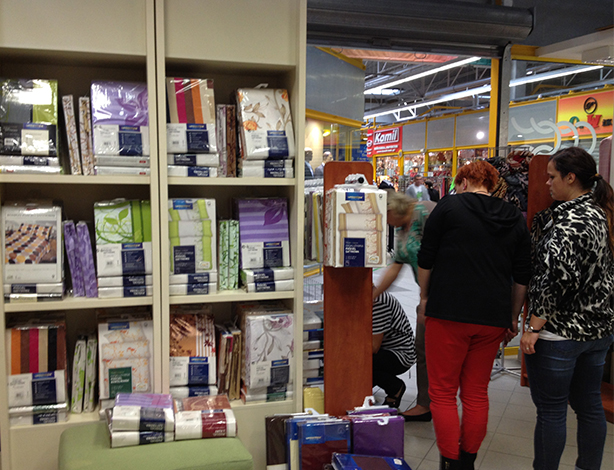 Sharda Group’s products at a retail outlet in Poland

“I began my entrepreneurial journey way back in 1978 when I was just a student of the ninth grade,” says Anil Mansinghka, who started his career by getting into the cloth business. The early start was more like a test run actually, as it was more intended at gauging his entrepreneurial skills. With success greeting him—thanks to his wisdom and hard work—a couple of years later, ambitious that he was, he began to diversify. “To begin with, I forayed into the chemical sector by setting up a plant for manufacturing sodium silicate, under the name of Bhilwara Chemical Works. Then I got into the synthetic textile segment in 1985, and the very next year entered the yarn business,” says Mansinghka.

To begin with, I forayed into the chemical sector by setting up a plant for manufacturing sodium silicate, under the name of Bhilwara Chemical Works … 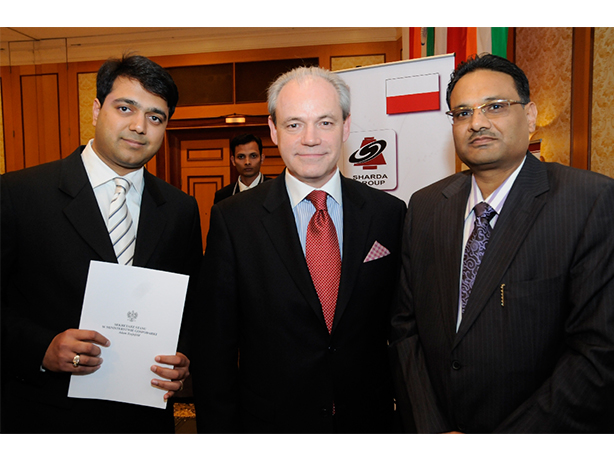 Anil Mansinghka and Amit Lath being honoured by Minister of Economy, Poland, Mr Adam Szejnfeld, for being the largest trade partner between India and Poland

Enthused with over a decade of consistent progress, in 1998 Mansinghka took a leap and established a weaving unit. He then got into exports in 2001. To take the exports business further, he joined hands with a young textile professional and dynamic entrepreneur, Amit Lath, and with that Sharda Group began its overseas operations by setting up an office in Lodz, Poland by the name of Sharda Europe Sp. Zo.o.

Amit Lath, who has studied at The Synthetic and Art Silk Mills’ Research Association (SASMIRA), too hails from a family that has been in the textiles business for decades. As of today, he is CEO and Managing Partner of Sharda Group of Companies and heads the group’s international operations from Poland. Sharda Group’s international operations was jointly founded by Amit Lath and Anil Mansinghka in partnership, in the year 2004. 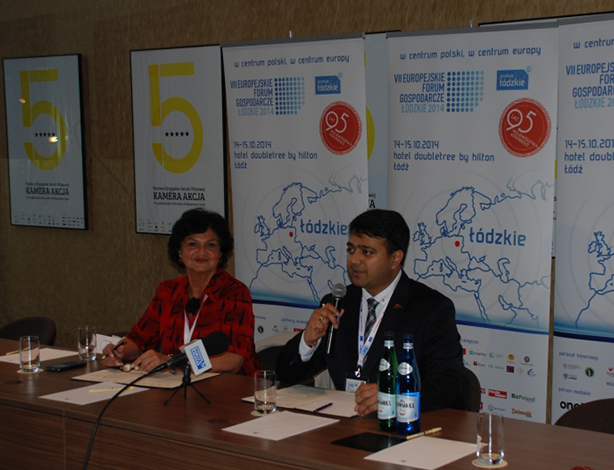 The Sharda Group straddles two continents today, even as it continues to grow. It comprises several companies that include Sharda Spuntex Pvt Ltd and Esspal International Pvt Ltd, whose scope of works range from weaving and trading to export and import of textile products. Among its offerings are carpet yarn, viscose and polyester yarn; interlock, rib and single jersey fabrics; and bed linen, kitchen linen, table linen and curtains. Sharda Europe Sp. Zo.o., the group’s European business, on the other hand, is the number one textile trading partner between India and Poland. Apart from importing various textile products into Poland from Sharda India and various other companies, Sharda Europe also retails an array of Oeko-Tex certified cotton, polyester and cotton-polyester blended bed linen and home products (such as duvet covers, flat sheets, fitted sheets, sheet sets, pillow cases, shams, bed skirts, valances, bolsters, cushion covers, and others) within Poland and nearby countries. All home textile products are sold through a large distribution network and under two local Polish brands NIONTEX® (Estd 1827) and Pamotex® (Estd 1825), which have been revived and acquired by the group, thanks to Amit Lath’s entrepreneurial acumen and drive. 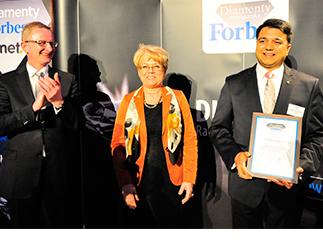 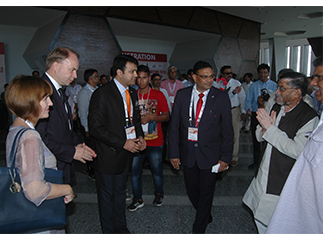 In terms of manufacturing capacities, the group’s weaving unit in Bhilwara produces 24 million metres of fabrics per year. The group also boasts over 400 state-of-the-art Sulzer and Airjet looms that produce various types of woven fabrics. It also has a modern stitching unit for manufacture of bed linen. Thanks to these and the Sharda Group’s focus on innovation, quality and customer service, it has achieved tremendous growth in both the domestic and overseas markets, as is borne out by its impressive haul of awards and recognitions. Among the more prominent of these are an award for being the biggest bilateral partner between India and Poland, the ‘Pioneer in Textile Industry’ award from the Times of India Group, the prestigious Fair Play – Poland award in 2012 and 2013, and many others. Also, in Poland, the group featured among the top 500 names in the Forbes’ Diamonds 2012 list. 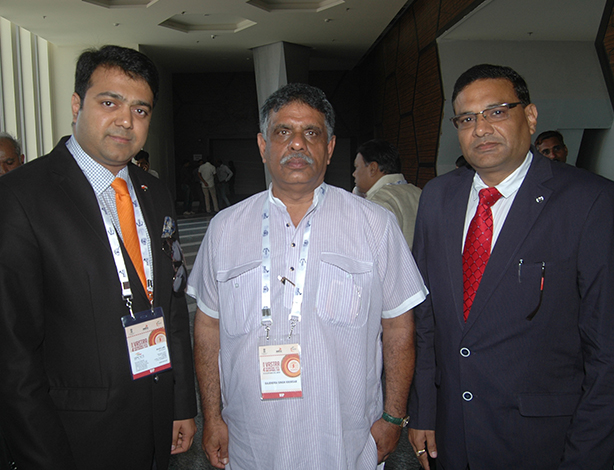 Having spent 21 years in Poland, Amit Lath has other achievements to his credit as well. In 2012, he founded Sharda Business Centre in Pabianice, Poland, which boasts in-house warehousing and customs clearance facilities of 1,00,000 sq ft, together with the latest equipment and required manpower. It also houses the group’s offices in Poland, apart from offices of Indo-Polish Chamber of Commerce & Industry, India’s International Movement for United Nations (IIMUN), Indo-British Trade Council, Velji Global Logistics, DTS Serwis, Philip Morris, Ago Logistics, Indipol, Aroyagya Ltd and others. Amit Lath also is a founder member of Lodz British International School and has been involved in a number of key projects in Poland. Further, he closely associates with the state and central governments in Poland to build and bolster ties between India and Poland—he is the vice president of Indo-Polish Chamber of Commerce & Industry (IPCCI).  He also has recently joined the Advisory Board (Europe) of India’s International Movement to United Nations (IIMUN), which has industry leaders and luminaries like Deepak Parekh, Dr Jamshed Bharucha, Nadir Godrej, Mahesh Bhupathi, Niranjan Hiranandani and others on its advisory board. Further, he has been recognised with a Doctor of Advance Studies (Honoris Causa) degree, for excellence in the field of management, by the Confederation of International Accreditation Commission, in cooperation with University of Azteca (Mexico). These apart, he also is involved with Poland’s business circuit and various associations and organisations.

Coming back to Anil Mansinghka, in 2014, feeling the urge to diversify yet again, he made his foray into the real estate sector. The very next year, he entered the e-commerce space as well by starting Bhilwara’s first ever online supermarket, GBiBiG. Under the real estate business (Shree Radheygovindam Resort Pvt Ltd), the group is in the process of developing two colonies in Bhilwara: Sharda Evergreen Park and Sharda Dream City. Apart from managing his businesses, Anil Mansinghka remains connected with Bhilwara’s business circuit and is the immediate past president of the Mewar Chamber of Commerce & Industry (MCCI), Bhilwara. He also is actively involved in social activities and holds key positions in several well-known trusts and clubs in Bhilwara. 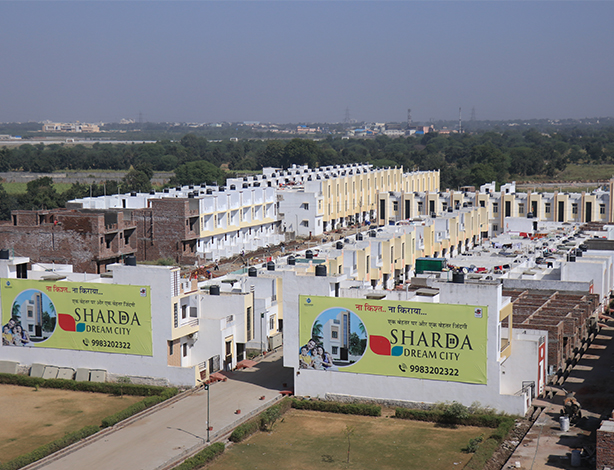 Asked about his future plans, Anil Mansinghka says he envisions constructing another 12,000-15,000 houses over the next 5-6 years—in addition to the 1,200 houses that are already under construction at Sharda Evergreen Park and Sharda Dream City. He also has plans for a spinning unit attached with a knitting unit for Sharda Europe Sp. Zo.o., Poland. As for Amit Lath, talking about future plans, he says, “We have acquired a logistics group and intend to expand our activities in warehousing and distribution, which will not only help our company keep costs low, but also bring additional revenue from the market by offering a wide range of warehousing and customs clearance facilities.”

Given that both Anil Mansinghka and Amit Lath have proven their mettle in their respective domains, their combined efforts to scale greater heights not only augurs well for the group but also the two nations that their business straddles, making it a win-win proposition for all.

We have acquired a logistics group and intend to expand our activities in warehousing and distribution, which will not only help our company keep costs low, but also bring additional revenue from the market…