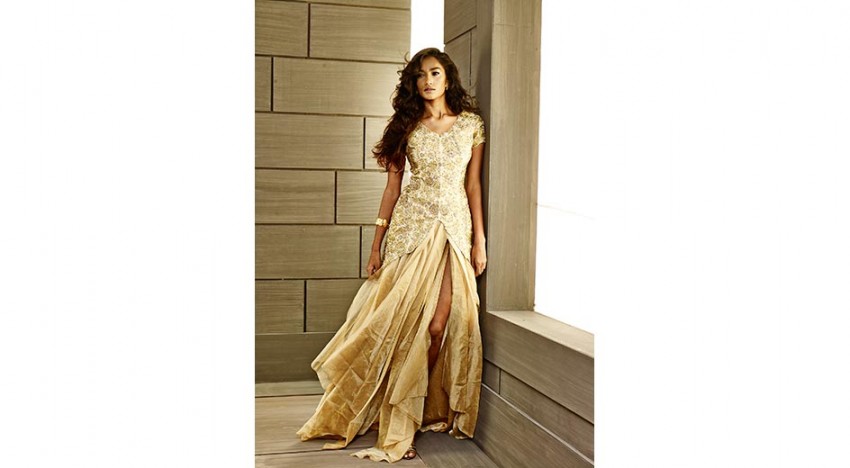 With a chaotically colourful life that still retains most of its old-world charm, Kolkata has emerged as a stimulus for curious indigenous minds who wish to make their mark on the country’s burgeoning fashion scene. Amongst a flurry of fashion labels fighting for the attention of the city’s elite, one that stands out is OSAA, a women’s ethnic wear brand that opened its doors at East Topsia Road in 2011.

Bhagalpur Matka, Tussar, Banarasi silk, Munga silk … When you are in conversation with Adarsh Makharia, owner and creative director of OSAA, you are sure to hear about these Indian textiles. The Kolkata-based designer has made it a mission to work with rare textiles to provide a window into India’s forgotten treasures, showcasing Indian aesthetics infused with regional sensibilities inspired by the Mughals. Indeed this celebration of the legacy of Indian textiles and weaves is what’s sure to grip patrons the moment they step into the brand’s 3,000-sq-ft flagship store. On display are strikingly rich jewel-toned collections of bridal lehngas, salwars, kurtis and saris, made from textiles sourced painstakingly from Varanasi, West Bengal and other Indian cultural hotspots.

Derived from the Sanskrit word ‘os’, OSAA means ‘dewdrops’ which, in Makharia’s words, “is one of the purest forms of nature”. The theme of OSAA is modern-vintage, and he takes great pleasure in recreating a style of the past. His creations have been donned by the likes of Bollywood actors Shraddha Kapoor and Parineeti Chopra.

While the first floor of the three-storeyed building is where you would find Makharia and his 12 assistants assembling the many inspirational components of upcoming collections on a mood board, the remaining floors are where the brand’s 200 karigars work diligently to transform bolts of textile and Kantha-embroidered fabric into ethnic wear that’s both exquisite and contemporary. Says he, “The Mughal era boasted some of the finest tailors and embroiderers the country has seen. The beautiful embroideries done by these karigars were very feminine, elegant and dignified. This is exactly what OSAA has managed to emulate.” To remain true to these age-old artisanal techniques, the designer also reaches out to Banarasi silk weavers in Uttar Pradesh, Chanderi silk weavers in Madhya Pradesh and Rajasthani Kota weavers who interlace silk and zari to create zari Kota embroidery.

Makharia is also doing his bit to revive the dying art of Kantha, a form of quilting indigenous to rural Bengal. In 2013, he joined hands with Shamlu Dudeja, a Kantha revivalist and founder of Self Help Enterprise (SHE), to launch a new collection called ‘Kantha Gatha’. Catering to the young generation, the Kantha collection, comprising jackets, blouses and saris, was stitched by SHE’s team of rural women artisans and unveiled by the then West Bengal Governor M K Narayanan’s wife, Padmini Narayanan.

Rather than following the rapid metamorphosis of the current fashion cycle, Makharia aims to establish a contemporary realistic standard for the creation of apparel—a feat made easier with his experience of almost two decades in the textile industry. Fashion came calling at the age of 18, when he joined his father’s business, Aashirvad Sarees Pvt Ltd, as a trainee. Launching his own textile unit later, Makharia spent his early days supervising block printing and screen printing for the domestic and export markets. He had an aha moment when he attended the first Lakmé Fashion Week in 1999. “That was the first step towards deciding to use my passion and knowledge of the fashion industry to create my own clothing brand,” says Makharia.

Several years down the line, Makharia has done just that with the help of his business acumen and adaptability. ✲

The Legacy Lives On