Home Uncategorized Meet the Next Generation of the KHETAWAT CLAN 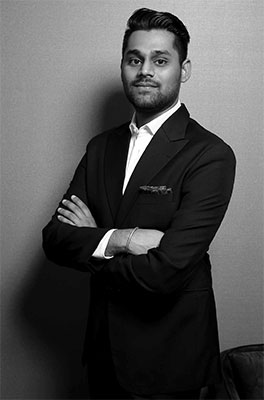 STANDING in his family’s office in Kolkata during a rare quiet moment in the day, young entrepreneur Vedang Khetawat reflects on his ancestors who cleared the path that brought him where he is today. The office is nestled in the midst of what quickly became a bustling hub of commerce and trade in the mid-twentieth century.

Looking back at his childhood, Vedang remembers how he would spend hours in the office after school, listening to his father’s phone calls with businesses across the globe. Sitting on the floor, playing with his paperweight and pens, a young Vedang would daydream about the future when he would be his own boss.

The family’s office became a school of sorts for him, where he would learn about the real world after a full day at the prestigious La Martiniere For Boys. He thus grew up observing the nuances of the trade, as his father and other executives made calls and transacted with buyers and suppliers all over the world. 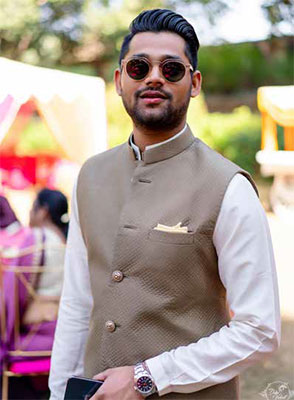 TRACING HIS ROOTS
The Khetawats have come a long way since they first left Dhankoli, their ancestral village in Nagaur, Rajasthan. Seeking a better life, the family set up an office in Burrabazar, a former yarn and textile market that flourished under the British Raj to become a commercial hub and one of Asia’s largest wholesale markets. Before long, the Khetawat Chemical & fertiliser Ltd became one of India’s largest manufacturers and suppliers of chemicals, alum, zinc and other allied products.

Vedang says that his grandparents’ success allowed them to live a lavish lifestyle. In the early 1960s, they would go jet-setting around the globe, when air travel was not affordable by most Indians. However, even though they found enjoyable ways to spend their money, Vedang’s grandparents were essentially business folk.

HONOURING HIS FAMILY LEGACY
As he prepares for this year’s Diwali celebrations, Vedang reflects on the many traditions that his family has been following for generations. On the day of Dhanteras, the family buys new idols of Lord Ganesha and Goddess Laxmi before submerging the idols bought last year into the River Ganga

Every year, the family celebrates Diwali with much gusto at both their family office and home in Kolkata. The
Pitron ki Puja is performed by the family priest, who has been serving the Khetawats for 30 years.

During the ritual, the family takes out old accounting books to remember and appreciate times not so long ago,
when accounting software was not readily available, and business owners had to spend hours to get the numbers
right. The Khetawats honour this tradition, offering their respects to the knowledge and wisdom of their forefathers and reflecting on the history of their business. After the puja, the family goes to the Goddess Laxmi Temple in the Burrabazar area, which holds deep significance for Kolkata’s business families.

Following these traditions year after year reminds the Khetawats of their forefathers’ hard work, dedication and
determination.

FOLLOWING IN HIS FAMILY’S FOOTSTEPS
Even though he hails from a business family, Vedang did not automatically follow in his ancestors’ footsteps. He
was not what one might call a star student. A Piscean, he has always been a dreamer and found solace in the world of art. He loves to paint and has even taken art lessons for eight years. His teachers would often commend him for his presentation skills and neat handwriting. Even today, Vedang believes in always being presentable and welldressed. He is typically seen wearing one of Sabyashachi Calcutta’s kurta, and bundi jacket.

After graduating from La Martiniere For Boys, Vedang pursued a bachelor’s degree in finance from St Xavier’s
College, Kolkata, and went on to earn a degree from the New York Film Academy. 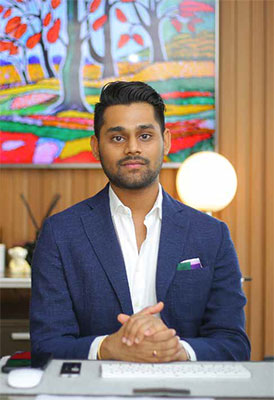 As passionate as he is for the arts, there is no denying that entrepreneurship runs through Vedang’s blood. It is a calling he does not take lightly. He believes that companies in the private sector have just as much responsibility as the government to solve problems such as e-waste, pollution, and climate change. Therefore, his most recent venture 999services.com seeks to reduce e-waste by selling refurbished air-conditioners and offering ancillary services through its e-commerce platform. The business is a winning opportunity for consumers and microentrepreneurs alike. By creating a culture of transparency, 999services.com has managed to increase its annual revenue and thrive even during the lockdown.

Today, Vedang is the one taking calls from people all over the world. Much of his day is spent working on improving processes in digital marketing and tasks related to accounting. He enjoys learning from other entrepreneurs, especially those who share his vision of helping society through private business ventures.

He has his sights set on other business ventures and is currently working with his brother Varun on increasing
the yield of their core telecom backhaul integration business.

For now, however, Vedang’s focus is on expanding business operations and adding more services and consumer products to their portfolio. His company is also eyeing government contracts and private orders from larger global companies. He is optimistic that the company will soon grow to a stage where it can invite young leaders to create value and enrich the lives of customers throughout the world.

His familial legacy of entrepreneurship has helped develop his sharp business acumen and taught him the significance of creating value for others. He is acutely aware of his responsibility to improve the lives of those around him as a business owner. India is a country with a rich history and a bright future. As such, Vedang is mindful of always honouring and respecting ancestral cultures and traditions as he builds companies that will pave the way for India’s next generation.