Home People Man On A Mission 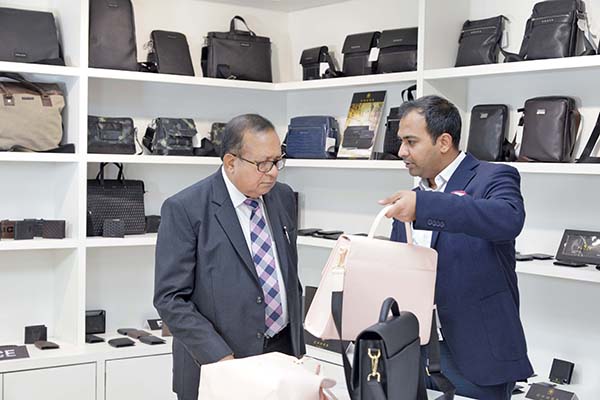 He describes himself as a soldier of the country. “While a soldier guards the border and serves the country, I strive to generate employment for thousands in India and guarantee them a decent livelihood. As an entrepreneur, I work not for my own personal goals, but with the ambition of doing something that benefits my motherland,” he says.

Meet Yashovardhan Gupta. He is the young and dynamic CEO of Torero Corporation Private Limited, the exclusive worldwide licensee of Cross’s leather accessory business, which is involved in manufacturing world-class products and exporting them to over 40 countries.

Shaping up for the future
Yashovardhan Gupta belongs to the Panchudala village in Rajasthan. His mother hails from Jhunjhunu. His ancestral surname is Harnathka, which was changed to Gupta three generations ago.

The entrepreneur graduated in computer science and acquired an MBA from the Indian School of Business, Hyderabad. He then commenced his corporate training under Naveen Jindal, the chairman and MD of Jindal Steel & Power Limited. He was responsible for formulating growth strategies for the group, a $18 billion conglomerate. Yashovardhan says, “I learnt a lot. The time I was training under Mr Jindal was an enlightening period.” Then, in 2009, he took up the reins of his father Rajesh Gupta’s company, Metropoli Fashions.

Rajesh Gupta had always been an inspiration to his son. He had shifted from Kanpur to Kolkata in 1985, and started Metropoli Fashions in 1988. Though the company suffered a brief setback due to a huge default from a US importer, it got back on its feet in no time. By 1991, it had begun associating with global brands such as Hugo Boss, Cerruti and DKNY and had managed to secure a partnership with Marroquineria. Even today, it remains one of the most reputed manufacturers and exporters of leather accessories in the region.

Upon joining Metropoli Fashions, Yashovardhan Gupta’s modern outlook and professional training kicked in. He noticed the absence of an organised business strategy in the 2,500 employee company. Neither the processes nor the IT system was up-to-date or scalable. Solving these issues would involve not only revamping the technology but also firing old staff and hiring new, more efficient people to replace them.

The inception of Torero
Since a complete revamp of Metropoli Fashions was impossible due to internal resistance, Yashovardhan was bent on building something new by leveraging the competencies of his father’s company. He says, “I wanted to change the industry. For that we needed a company with a different and modern work culture and a new thought process. At Torero, we have a disruptive business model. That was the idea. It would have been difficult to do the same within an old company.”

His father’s struggle to build his own business empire also encouraged him to take the plunge and fulfil his dream of making a name for himself in the corporate world. Thus, Torero was born on 12.12.12. Yashovardhan became obsessive to the point that he did not take a single holiday for four years, focusing only on building the company. He spent the time working round-the-clock, visiting and pitching ideas to various international brands. But things did not go his way initially.

The struggle
Yashovardhan was unable to bring in much business from his international tours and meetings with probable clients. Then he realised that a structured approach was needed to identify a new partner. He began looking for a company with an already established name, even if it was not recognised as a luxury brand.

Enter Cross, a US-based leather accessories company that was established in Providence, Rhode Island, in 1846. The company was looking to expand its leather accessories business and Yashovardhan took advantage of this opportunity. After multiple visits to the Cross headquarters and other offices to convince the board, he was eventually able to successfully endow his Torero Group with an exclusive long-term licence for the brand name. He says, “Both my weakness and strength lie in the fact that I can get obsessive. If I want something, I will get it. If not today, then ten years later, but I will get it.”

Redefining ‘Make in India’
Yashovardhan had opted to take a different route, but the thinking behind it was logical and straightforward. “At that time, Indian companies did not have the confidence to acquire an international brand. It was time to set up a company that would not just manufacture but also acquire licences for global brands. I have always felt that if you are serious about business, then you must have a large, solid business. That comes from acquiring a brand, partnering with a brand or creating a really large brand. I have never been in favour of creating smaller brands,” he explains.

At the same time, he was aware that when Indians decide to buy a leather bag of good quality, they never opt for an Indian brand that is relatively new. He says, “They prefer a global brand, so I did not want to waste huge capital in creating an Indian brand. I felt this was optimal use of capital.”

Today, the Torero group is giving a shape to Prime Minister Narendra Modi’s ‘Make in India’ campaign by becoming one of the fastest-growing fashion houses in the country. It has acquired licences for well-known global brands such as Cross, Victorio and Lucchino, Police and Cosmopolitan. These products are made in India, but cater to a global customer base. The group has almost touched the $20 million mark in annual revenue and employs 4,000 highly skilled workers, who help in manufacturing products that showcase extraordinary craftsmanship.

Market presence
With Varun Narayan, Yashovardhan’s friend from ISB as the current COO of Torero, and a $5 million turnover, the company is readying itself for a 40% growth. And with the tie-up with Police, which has invested $1.1 million to penetrate the Indian, UK, French and Spanish markets, this target does not seem an impossible dream.

At present, Torero has more than 300 national and around 1,200 international outlets for its Police and Cross brands, with Shoppers Stop being their major retail partner in India. Its online sales partners include e-commerce giants such as Amazon, Flipkart, Jabong and Myntra.

An inspiration
Yashovardhan’s hard work and vision is also winning him recognition internationally. An example of this is getting a call from the prestigious MIT Sloan School of Management to be a guest lecturer on operations management for MBA students, alongside global corporate giants such as Tesla founder Elon Musk. Torero also is the only Indian company to receive the Red Dot Design Award for two years in a row, in 2015 and 2016 respectively.

Staying grounded
This go-getter of the corporate world is a simple man in his personal life. A self-confessed geek, he spends his free time with his gang of friends, who are all budding industrialists, taking part in various adventure sports, winter sports and trekking, and playing board games and video games. He also enjoys being around his children—Aaradhya Gupta, who is 4, and Agastyavir Gupta, who is 2. Yashovardhan often reminisces about his simple yet fairy-tale childhood. He remembers how his father rode a scooter in the early stages of his business and dropped him to school. He appreciates Rajesh Gupta’s diligence and hard work, which eventually helped by giving him a standing in the leather world. His own success too has not made him complacent. He has not forgotten his humble roots. Even today, his father continues to be his role model and inspires him to move forward in life.

Lastly, talking about the future, he says, “The future of Indian business will depend on removing the dependency of businesses on brand licences, while still maintaining classy designs and valuable operational efficiency.”